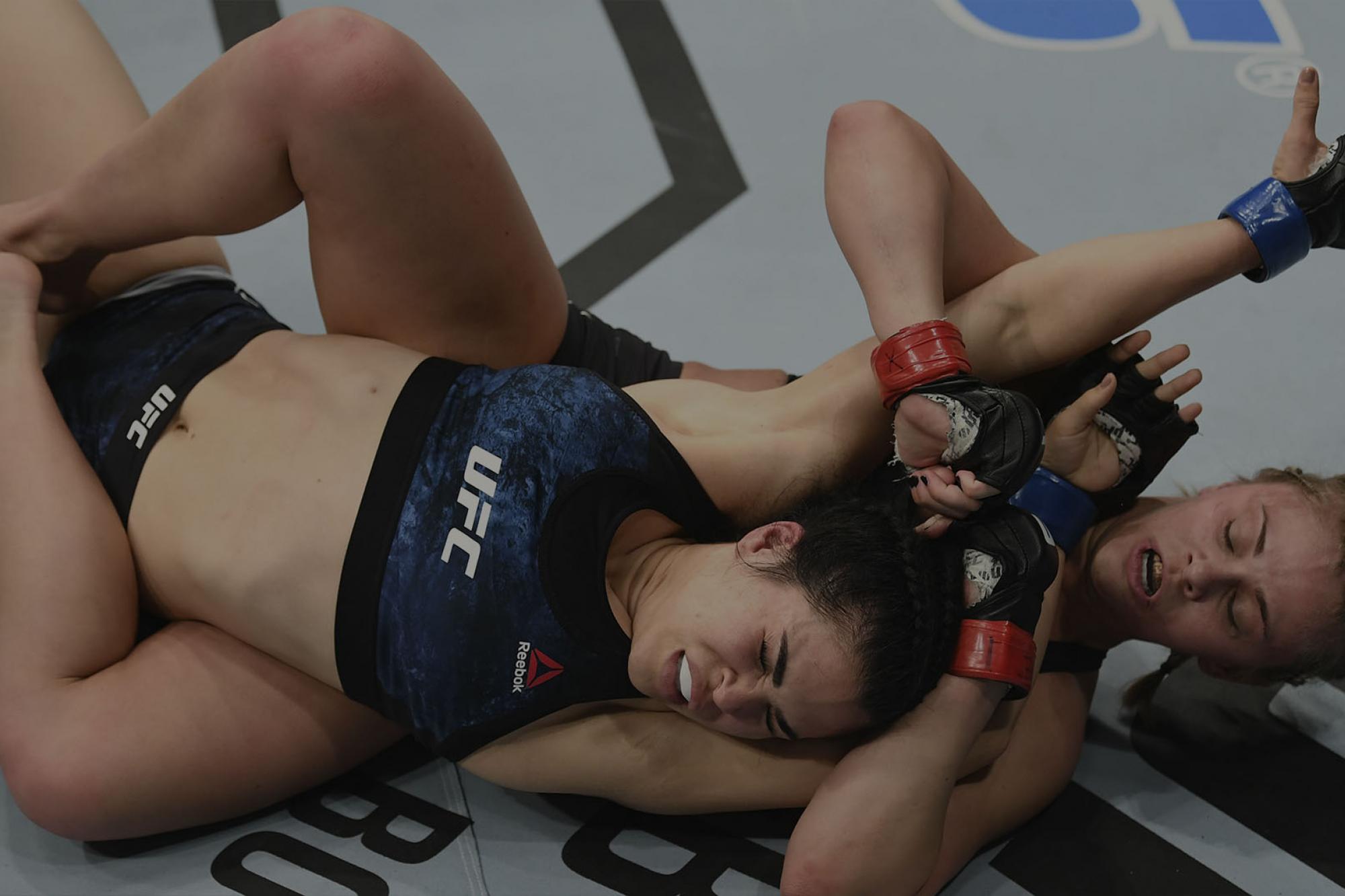 VanZant, Gillespie Give ESPN+ A Show

The UFC debut of Greg Hardy ended in anti-climactic fashion Saturday at Brooklyn’s Barclays Center, as the former NFL lineman was disqualified for an illegal knee in the second round of the UFC Fight Night co-main event, allowing Allen Crowder to pick up his first Octagon victory in their heavyweight bout.

The exchanges were wild as the fight opened, with Hardy holding the edge. Crowder survived the early onslaught and fired back, taking Hardy out of the first minute for the first time in his pro career. A takedown followed from the North Carolina native in the second minute, another first for Hardy, and Crowder was able to take control until Hardy got upright with 90 seconds remaining. Crowder then tried to pull guard as he locked up a guillotine, but Hardy broke free and wound up in the top position. Crowder tried to secure a triangle choke from his back, but again, Hardy got loose.

Both heavyweights were winded to start round two, but Hardy was the busier of the two. Crowder soon began taunting his foe and went on the attack. Hardy fired back, but in an ensuing sequence, he landed a knee to the head with Crowder clearly down on the canvas. As the crowd erupted in boos, referee Dan Miragliotta stepped in, and with Crowder deemed unable to continue, Hardy was disqualified. The official time of the finish was 2:28 of the second round.

Unbeaten lightweight contender Gregor Gillespie spoiled the return of Yancy Medeiros to the 155-pound weight class, halting the Hawaiian veteran in the second round to move to 6-0 in the Octagon.

The first five minutes were all Gillespie, as he locked Medeiros up early and didn’t let go until the horn sounded to end the round.

There was more of the same in the second, this time with Gillespie getting into the mount position on the mat midway through the frame. Medeiros got loose and back to his feet, but Gillespie was still there, locked to his back against the fence before another trip to the canvas. This time, Gillespie flattened Medeiros out and fired off strikes until referee Todd Anderson stopped the fight at 4:59 of round two.

No. 2-ranked flyweight contender Joseph Benavidez made it two for two over No. 8-ranked Dustin Ortiz, winning their rematch via unanimous decision.

Not surprisingly, the two top-flight flyweights engaged in a back and forth first round with both having their moments. But Benavidez (27-5), who defeated Ortiz via decision in 2014, scored a takedown midway through the round and then added a knockdown with a minute left that put the round in his favor.

After some close wrestling exchanges, it was Ortiz (19-8) getting the takedown in the third minute of the second round, but Benavidez scrambled out of trouble and took Ortiz down. Both fighters soon rose with a minute left but didn’t stay standing long, as the grappling continued, with Ortiz ending the frame with a takedown and a choke attempt.

Benavidez took the fight to the mat early in round three, but Ortiz used some elbows to nearly take his foe’s back before Benavidez scrambled and took the dominant position again. Ortiz tried to turn his way out of trouble, but a body triangle kept him from moving. With two minutes left, Ortiz found daylight, only to see Benavidez have an answer for everything, leading to a 29-28 verdict for Benavidez on all three scorecards.

Watch Paige VanZant backstage after her win at UFC Brooklyn

Flyweight prospect Paige VanZant returned from a year-long layoff due to injury to break a two-fight losing streak and submit Rachael Ostovich in the second round.

Ostovich got the fight to the mat 30 seconds in, but the action stalled, prompting a restart from referee Kevin MacDonald with 3:13 left. Ostovich got another takedown seconds later, this time working for a choke from the top position. With a minute left, VanZant got loose and tried to lock up Ostovich’s leg, but the Hawaiian got free and scored one more takedown before the end of the round.

VanZant had some success with her striking early in round two but wound up getting taken down again. The two then scrambled, and this time it was VanZant in control as she took Ostovich’s back and fired off strikes. Ostovich almost escaped, but VanZant had her arm, prompting a tap out due to an armbar at 1:50 of the second round.

With the win, Portland’s VanZant moves to 8-4. Waianae’s Ostovich falls to 4-5.

It didn’t look good for light heavyweight contender Glover Teixeira early on against Karl Roberson, but the veteran turned the tables just as fast, submitting his opponent in the first round of the main card opener.

A takedown attempt in the opening minute went wrong for Teixeira, as close range elbows jarred the Brazilian and put him on the mat. Roberson went on the attack, but Teixeira survived and was able to get to his feet and score the takedown. Once on the mat, Teixeira got into the mount position and went to work. With less than two minutes left, he locked in an arm triangle, and Roberson was forced to tap out. The time of the finish was 3:21 of round one.

With the win, the No. 12-ranked Teixeria ups his record to 28-7. Roberson, who replaced the injured Ion Cutelaba, falls to 7-2.