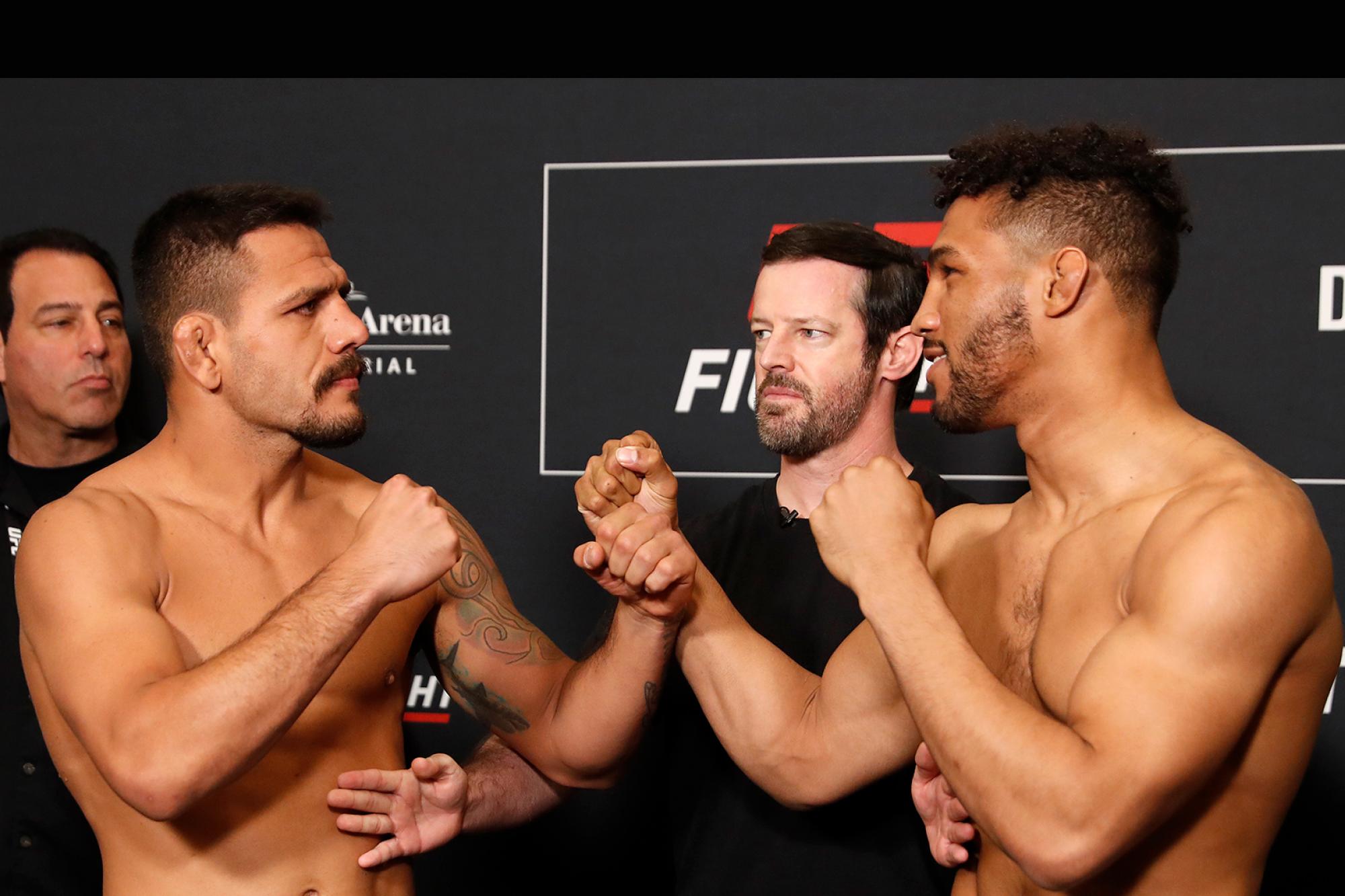 All The Big Winners From Blue Cross Arena In Rochester, New York
By Thomas Gerbasi • May. 17, 2019

Scroll down to see how all the action unfolds from Blue Cross Arena in Rochester, New York.

Watch UFC Rochester on ESPN+ with any device!

Featherweights Julio Arce and Julian Erosa got the night off to a rousing start, trading on the feet for nearly three rounds until Arce ended matters via knockout in the final frame.

Erosa was largely the aggressor throughout the fight, but Arce’s crisp counters kept things close throughout, leaving the third round to possibly decide the victor. But Queens’ Arce took things out of the judges’ hands with a left kick to the head that sent Erosa crashing to the canvas. A ground strike officially put an end to the fight, with referee Keith Peterson calling a halt at the 1:49 mark of round three.

Veteran middleweight Zak Cummings impressed in his bout against Trevin Giles, breaking open a close fight by submitting the previously unbeaten prospect in the third round.

As in the Arce-Erosa bout that preceded it, the first two rounds were hard to call, with Cummings the busier striker of the two but Giles the more effective with his punches. The Texan also did more damage, cutting Cummings on the nose and around the eye. And with clinch work not resulting in any takedowns, Cummings felt the need to fight with an increased sense of urgency as the final round commenced, and he landed a few hard shots in the first minute of the third. Giles returned the favor, but with 90 seconds remaining, a hard left dropped him and Cummings went right to work with a guillotine choke that forced Giles to tap out at 4:01 of round three.

In a clash of light heavyweight veterans, it was Ed Herman emerging victorious with a first-round stoppage of Patrick Cummins.

Both Herman and Cummins seemingly had no intention of going 15 minutes, as they took turns throwing and landing hard shots at close range. Cummins did briefly change the location of the bout with a takedown with two minutes to go in the opening round, but Herman got up quickly, and in a subsequent exchange, he landed a right knee that staggered and dropped Cummins. Cummins tried to recover, but Herman pushed him back down and landed a series of strikes that brought referee Dan Miragliotta in to stop the fight at 3:39 of the first round.

Dawson pressed the action in the opening frame, scoring a pair of takedowns, but Trizano was far from out of the fight, as he scored well on the feet, cut Dawson over the right eye and also defended well at close range.

Trizano’s jabs were sharp as round two began, reopening Dawson’s cut and prompting the Missouri product to take the bout to the mat. Trizano gave up his back, which was just fine with Dawson, who worked for a rear naked choke and got it, with Trizano tapping out at 2:27 of the second stanza.

Highly-touted welterweight newcomer Michel Pereira lived up to the hype in his Octagon debut, stopping British veteran Danny Roberts in the first round.

Pereira rocked Roberts with the first right hand he threw, and a few moments later, he scored with the same blow. The flashy moves kept coming from the Brazilian, and after a flying knee stunned Roberts, a right hand followed and finished the bout, with referee Todd Anderson stopping matters at 1:47 of round one.

Rochester’s own Desmond Green thrilled his local fans as he scored a three-round unanimous decision over Octagon newcomer Charles Jourdain in lightweight action.

If Jourdain was suffering from a case of the first-time UFC jitters, Green made sure he felt them even more acutely in the opening frame, as he was a step ahead of his foe on the feet and even on the ground, where he took the fight with 90 seconds remaining in the round.

Jourdain settled in as the second round began, with his kicks a particularly effective weapon, and his busy attack could have very well evened the score with Green heading into the final round.

Keeping the momentum going into the third, the Canadian continued to fire off leg kicks repeatedly, but a trio of takedowns by Green in the closing stages of the bout was enough to lock up the final frame and the fight.

No. 6-ranked women’s bantamweight Aspen Ladd kept her unbeaten record intact, as she scored her second victory over Sijara Eubanks via unanimous decision.

Eubanks (5-3), who lost a 2017 decision to Ladd, reintroduced herself to her rivalwith a thudding slam to the mat, and “SarJ” went to work with ground strikes before the Californian got back to her feet. In an ensuing scramble, Ladd sunk in a guillotine choke and the two went to the mat. Eubanks escaped, but Ladd took her back. Eubanks got free and finished the round with a series of hard punches that rattled Ladd.

Ladd (8-0) took Eubanks down in the second minute of round two, and she again took her opponent’s back. Two choke attempts came up empty, but Ladd kept working, putting in a solid round.

And while much of the third round was full of back and forth standup exchanges, it was the toe-to-toe action in the closing seconds that got the crowd roaring for both fighters, who then had to wait for the judges’ verdict, which went to Ladd via scores of 30-26, 29-27 and 29-28.

Hubbard was busy and competitive in the first round of his UFC career, but Ramos still controlled the frame thanks to some hard strikes upstairs, a takedown and a near-finish on the mat as time ticked away.

There was little change to this pattern in the second round, with Hubbard outworking Ramos but the Brazilian scoring bigger on the feet and the mat.

Ramos rattled Hubbard with more strikes in the final round before getting the fight back to the canvas, yet the Coloradan continued to show off his toughness in surviving the attack and removing himself from immediate danger. And while Hubbard lost the decision, he certainly gained some fans with his effort.

The third bout between lightweights Charles Oliveira and Nik Lentz kept Brazil’s “Do Bronx” unbeaten against “The Carny,” as he stopped Lentz in the second round to extend his current winning streak to five.

Both fighters showed improved standup in round one, but it was Oliveira who did the majority of the damage, cutting Lentz over the left eye and prompting “The Carny” to go for a takedown with less than two minutes remaining. He got it, but Oliveira swept him and controlled the action on the mat until the two rose in the closing seconds.

Lentz returned the fight to the mat to start round two, only to get greeted by a tight guillotine choke by Oliveira. An illegal upkick to the head by Oliveira prompted a stop to the action and a hard warning from referee Todd Anderson. And after restarting, Oliveira was able to get back to his feet. Once standing, Oliveira landed a lightning-fast right hand that sent Lentz to the mat, and moments later, the fight was over, with referee Todd Anderson stepping in at 2:11 of the second stanza.

Stepping in for Neil Magny on less than a week’s notice, Derrick Krantz came to fight against welterweight contender Vicente Luque, but Luque was too much for the Texan, stopping his foe in the first round to extend his current winning streak to five.

Krantz went on the attack as the fight began, and while Luque locked up a guillotine choke, Krantz fought free and fired off ground strikes before taking the back of “The Silent Assassin.” Now it was Krantz’ turn to look for a choke, but the Brazilian found daylight and got to his feet. With 1:20 left, Luque stunned Krantz with a right hand, and after dropping his foe, a series of unanswered ground strikes brought in referee Dan Miragliotta to stop the bout at 3:52 of the opening round.

In a meeting of the last two fighters to hold the Invicta FC featherweight title, Felicia Spencer made an impressive UFC debut with a first-round submission of Megan Anderson.

After taking some strikes from Anderson to start the fight, Spencer locked up with the Australia native and ultimately took her down to the mat. Spencer proceeded to take Anderson’s back, and after softening her foe up with strikes, she sunk in the rear naked choke that forced Anderson to tap out at the 3:24 mark of round one.

With the win, the Orlando-based Canadian moves to 7-0. Anderson falls to 9-4.

Middleweight prospect Ian Heinisch may find himself as a 185-pound contender next week, as he scored a come from behind unanimous decision victory over Antonio Carlos Junior.

Carlos wasted to time getting the fight to the mat, not the place Heinisch wanted to be, but “The Hurricane” managed to get to his feet. Carlos stayed locked on, though, eventually getting the bout back to the mat. Late in the round, a guillotine attempt came up short, but it was a clear round for the Brazilian.

It took Carlos a little longer to get a takedown in round two, but it was still the same result, as he grounded Heinisch in the second minute. Heinisch again rose with Carlos on his back, but after landing a couple elbows, he was grounded once more. This time, Heinisch scrambled into the top position and was able to put together his first string of consistent offense, and he jarred Carlos with hard strikes before the horn sounded.

Heinisch carried the momentum of the second round into the third, and while there were several compelling scrambles between the two in the final frame, it was Heinisch who put together the late surge that allowed him to take the win.

Rafael Dos Anjos’ first fight of 2019 was a winning one, as he spoiled the welterweight debut of former lightweight contender Kevin Lee via fourth-round submission in the main event of UFC Fight Night at Rochester’s Blue Cross Arena.

Both traded kicks to start the fight, and the big shots kept coming, with Lee drawing first blood by scoring a flash knockdown then a takedown. Dos Anjos got loose and upright, but it was Lee pushing the pace hard until a late run by RDA that saw the former lightweight champion score with a head kick and a takedown of his own.

Lee got a big takedown of Dos Anjos in the first minute of round two, but a choke attempt allowed RDA to get free. Again, the Brazilian landed with a hard strike before a takedown, and now it was Dos Anjos pushing the pace until Lee decided to put his foot on the gas again, with his grueling pressure against the fence giving him the edge.

In the opening minute of round three, Dos Anjos scored a takedown, but Lee rose fairly quickly. The two proceeded to grapple against the fence until Lee was able to take Dos Anjos’ back on the mat. Dos Anjos scrambled his way out of trouble and continued to have success with his ground game, and in the fourth he suddenly finished matters with an arm triangle choke that forced Lee to tap out at 3:47 of round four.