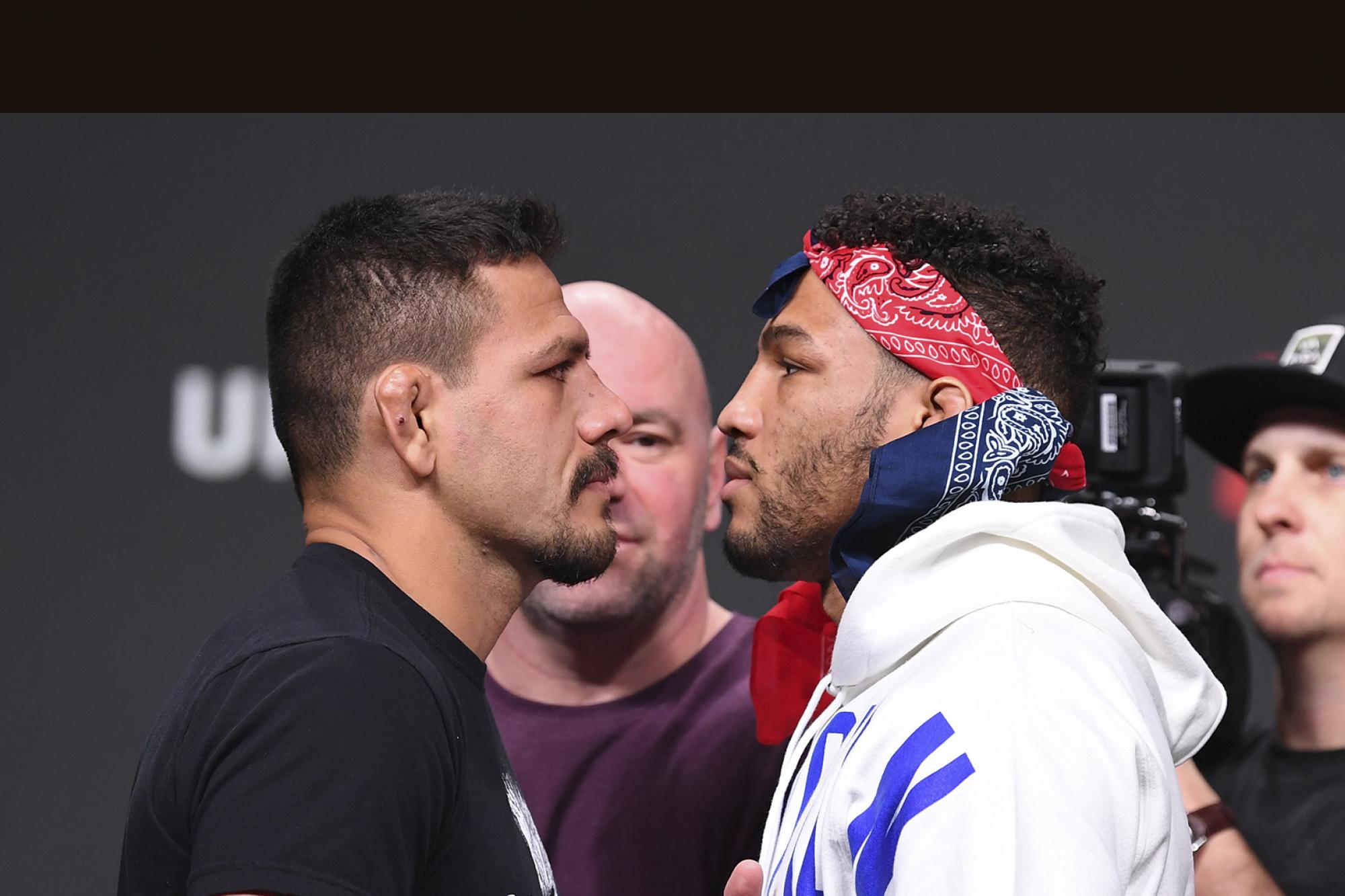 We've Got The Rundown Of All Your Upstate New York Bouts, From Top To Bottom
By Damon Martin • May. 14, 2019
Rafael Dos Anjos Vs. Kevin Lee

As Rafael Dos Anjos looks to climb back up the contenders’ list in the welterweight division, former lightweight Kevin Lee will attempt to make his own impact as he moves to 170 pounds in the main event of UFC Fight Night in Rochester, NY. While competing at lightweight, Lee was a technical boxer with good conditioning and world-class grappling. Lee has powerful takedowns and a slick submission arsenal at his disposal, but this will be his first test at welterweight and he’s jumping right into the deep end of the division. Dos Anjos holds several high profile wins at 170 pounds, including his unanimous decision victory over former champion Robbie Lawler. Of course, Dos Anjos has dropped his last two, but the fights came against current champion Kamaru Usman and former interim champion Colby Covington. Now he has a chance to prove himself against another top flight grappler in Lee, who would love nothing more than to start off his welterweight career with a win over a top five-ranked opponent.

Undefeated bantamweight contender Aspen Ladd will look for her third win in the UFC in a rematch against former Ultimate Fighter finalist Sijara Eubanks, who moves to 135 pounds after starting her career in the Octagon as a flyweight. Ladd defeated Eubanks two years ago when both were fighting in Invicta Fighting Championships but they have each developed and evolved quite a bit since that time. Ladd is considered one of the best prospects at 135 pounds after a pair of dominant wins over Lina Lansberg and Tonya Evinger, and she could be getting close to title contention if she can pull off another lopsided victory, but she will definitely have her hands full with Eubanks on the hunt for revenge after falling to her in their first meeting. Eubanks has looked unstoppable during her time in the UFC, but a debilitating weight cut has been her hardest opponent. Now that Eubanks is moving up to bantamweight, she will attempt to keep her win streak alive while avenging the last loss she tasted before joining the UFC roster. 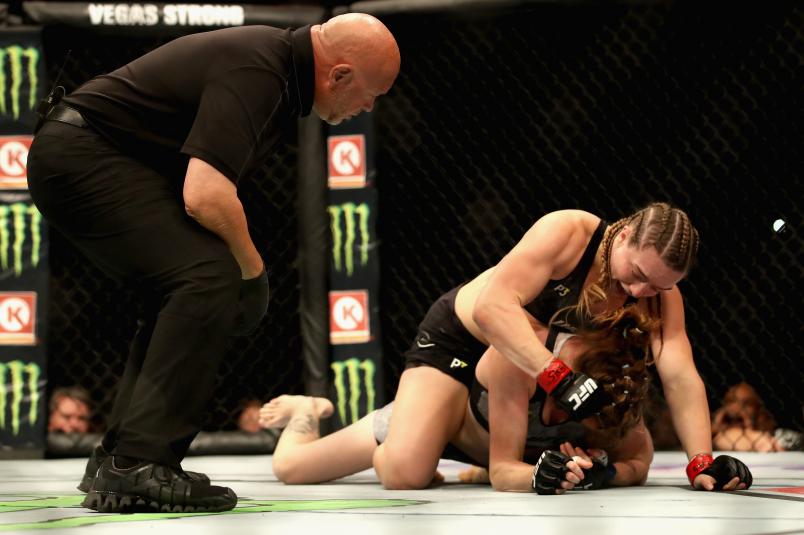 Grappling specialist Antonio Carlos Junior has wrapped up five wins in a row, with four of those victories coming by way of submission. If he hopes to get to six consecutive wins, Carlos Junior will have to go through Contender Series veteran Ian Heinisch, who comes into the fight off a win in his UFC debut, as well as four in a row overall. Heinisch is an extremely heavy-handed middleweight with knockout power in both hands. The real key for Heinisch will be avoiding the world-class ground game of Carlos Junior, who might be one of the most dangerous submission fighters in the sport right now. A win could help push Carlos Junior towards a top 10 ranking, while Heinisch will undoubtedly look to send notice to the middleweight division if he can stop the Brazilian on Saturday night. 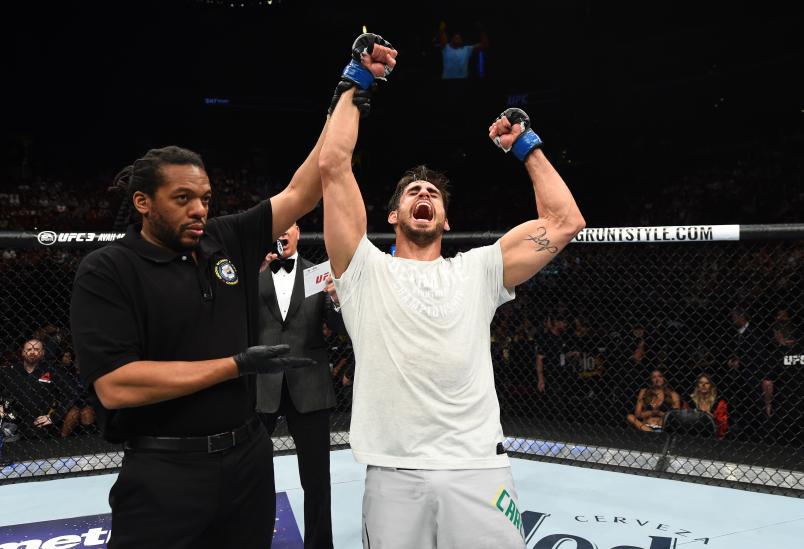 Off four straight wins, Charles Oliveira will revisit an old rivalry when he faces Nik Lentz in Rochester. These two have met twice in the past, with the first fight ending in a no contest following an illegal strike and then Oliveira submitting Lentz in the rematch back in 2015. Now, almost exactly four years later, the lightweights will do it again as Oliveira looks to put Lentz in his rearview mirror once and for all with another win. Meanwhile, Lentz will seek revenge against Oliveira while also attempting to build on a two-fight win streak.

Hear from Oliveira on why he fights.

Davi Ramos has been on quite a roll lately, with three straight wins, all by rear naked choke, but UFC newcomer Austin Hubbard would love nothing more than to end his momentum while getting a win in his first appearance inside the Octagon. Hubbard has racked up three wins in a row of his own while competing on the regional scene, but he takes a step up in competition coming to the UFC and drawing Ramos right out of the gate. If he can pull off the upset it would be a huge win in his debut, while Ramos would love to take advantage of his main card slot to get his fourth win in a row and perhaps his fourth consecutive submission as well.

In a battle of former Invicta FC featherweight champions, Megan Anderson will take on undefeated UFC rookie Felicia Spencer. Since arriving in the UFC, Anderson has gone 1-1, getting her first win against Cat Zingano in her most recent outing. Anderson is a tall, nasty striker with a ton of power and relentless offensive pressure when she’s in control. As for Spencer, she comes into the fight with a perfect 6-0 record, including back to back submission wins. This could really be a clash of styles, with Spencer looking for a ground attack while Anderson will undoubtedly attempt to keep this one standing. As the women’s featherweight division continues to establish itself, the spotlight will shine bright on Anderson and Spencer on Saturday night. 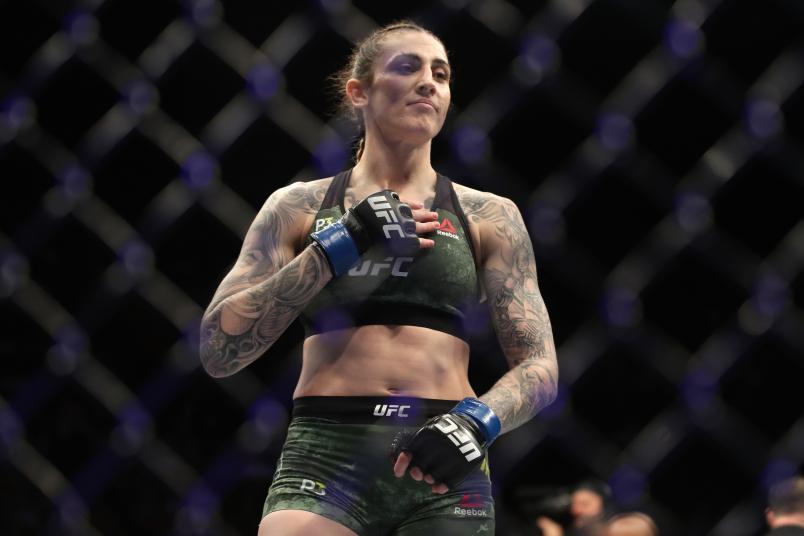 INGLEWOOD, CA - DECEMBER 29: Megan Anderson of Australia celebrates her victory over Cat Zingano in their women's featherweight bout during the UFC 232 event inside The Forum on December 29, 2018 in Inglewood, California. (Photo by Christian Petersen/Zuff
MICHAEL TRIZANO VS. GRANT DAWSON

Undefeated Ultimate Fighter winner Michael Trizano has picked up two wins since joining the UFC roster, and now he faces a Dana White’s Tuesday Night Contender Series veteran in Grant Dawson. Since debuting on the reality show, Trizano has continued to surprise his opponents with a sharp boxing game and a very well-rounded skill set. Trizano isn’t flashy but he definitely knows how to get the job done. This weekend, Dawson will attempt to hand him his first defeat as he looks to build on a four-fight win streak, including a unanimous decision victory in his Octagon debut. Dawson may have gone to decision on that night, but he’s typically a finishing machine with a slew of knockouts and submissions on his resume, so don’t blink when he engages with Trizano in this lightweight matchup. 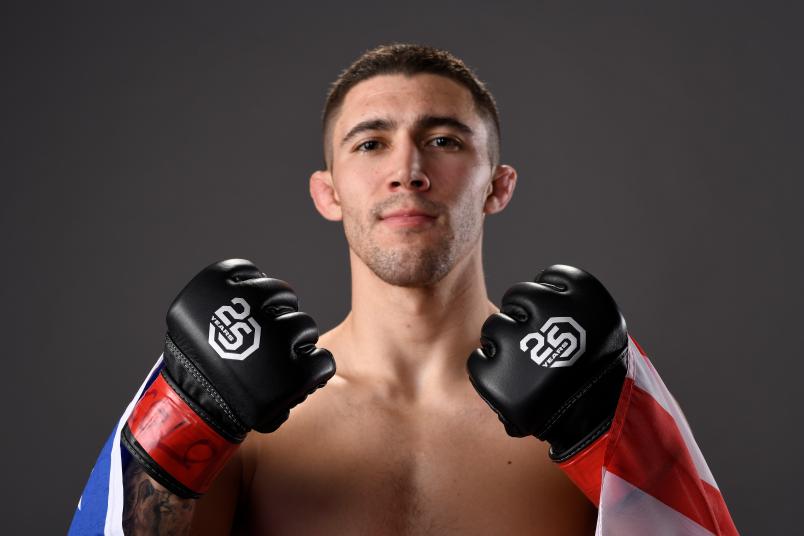 New York native Desmond Green desperately wanted a chance to fight at home following a huge TKO victory in his last performance and now he gets his wish. Green faces 9-1 UFC newcomer Charles Jourdain, who comes into the fight off four wins in a row. Jourdain has finished all four of those fights by either knockout or submission, and now he takes a step up in competition to challenge a veteran like Green, who put on arguably the best performance of his UFC career in his last victory over Ross Pearson. 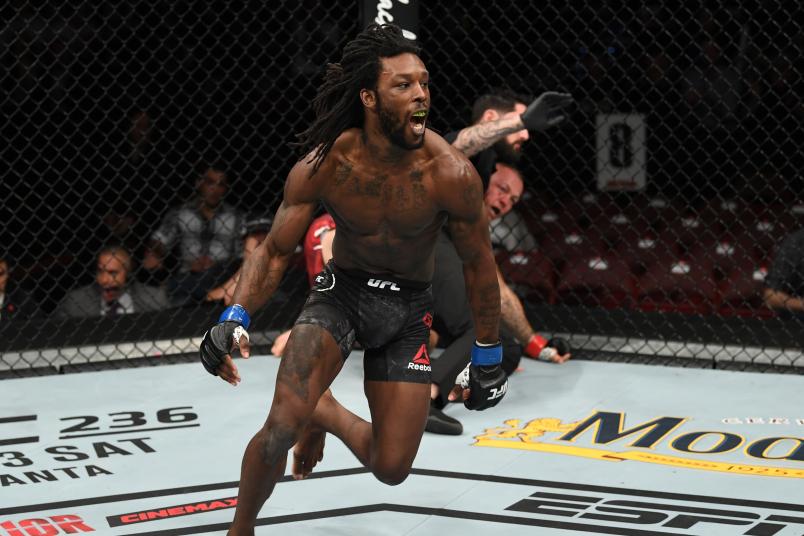 PHILADELPHIA, PA - MARCH 30: (L-R) Desmond Green reacts after defeating Ross Pearson of England by TKO via punches in their lightweight bout during the UFC Fight Night event at Wells Fargo Center on March 30, 2019 in Philadelphia, Pennsylvania. (Photo by
PATRICK CUMMINS VS. ED HERMAN

It’s a must win situation for Patrick Cummins and Ed Herman as they prepare to clash in a light heavyweight bout on the preliminary card. Previously ranked in the top 15, Cummins has fallen on harder times lately with two straight losses while going 2-4 over his past six fights. The former Penn State wrestler has definitely put on some impressive performances in his UFC career and he would surely like to return to the winner’s circle this weekend. Herman could say the same after he’s dropped his last three in a row including a heartbreaking split decision in his last fight. With so much on the line, expect Cummins and Herman to do whatever it takes to get the job done in this fight.

Danny Roberts has always put on entertaining fights, and that’s not likely going to change in this matchup against first-time UFC fighter Michel Pereira. Coming into the contest, Pereira has earned a pair of knockouts in a row but he’ll definitely have his hands full with a veteran like Roberts, who is always just one shot away from ending a fight. Even in defeat, Roberts never goes down without giving his opponents everything they can handle, so this should be a fight filled with fireworks from two proven finishers. 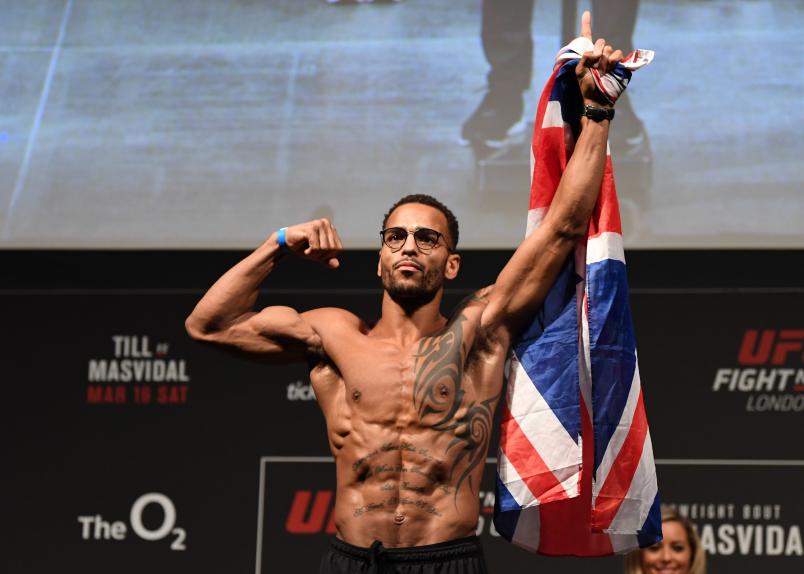 LONDON, ENGLAND - MARCH 15: Danny Roberts of United Kingdom poses on the scale during the UFC Fight Night weigh-in at The O2 on March 15, 2019 in London, England. (Photo by Jeff Bottari/Zuffa LLC/Zuffa LLC via Getty Images)
ZAK CUMMINGS VS. TREVIN GILES

Zak Cummings got off to a good start in his new career as a middleweight in his last fight but now he faces a very tough test this weekend against Trevin Giles, who is undefeated with a pair of TKO victories already on his UFC resume. Giles has looked like a serious prospect throughout his career with wins over the likes of Ryan Spann, James Bochnovic and most recently against Antonio Braga Neto. He now faces a veteran in Cummings, who comes into the fight off a dominant win in his 185-pound debut and a 3-1 record over his past four trips to the Octagon.

More UFC Rochester: On The Rise

Julio Arce tasted defeat for the first time in his UFC career via split decision in his last fight, so there’s little doubt he’s determined to get back on track. His opponent in Rochester will be former Contender Series veteran Julian Erosa, who came up short in his last two UFC bouts. Erosa has more than a few highlight reel finishes on his record, but now just getting his hand raised is paramount.  He faces a daunting task while taking on a New Yorker in Arce, who wants to return to his winning ways while fighting in front of a home audience.