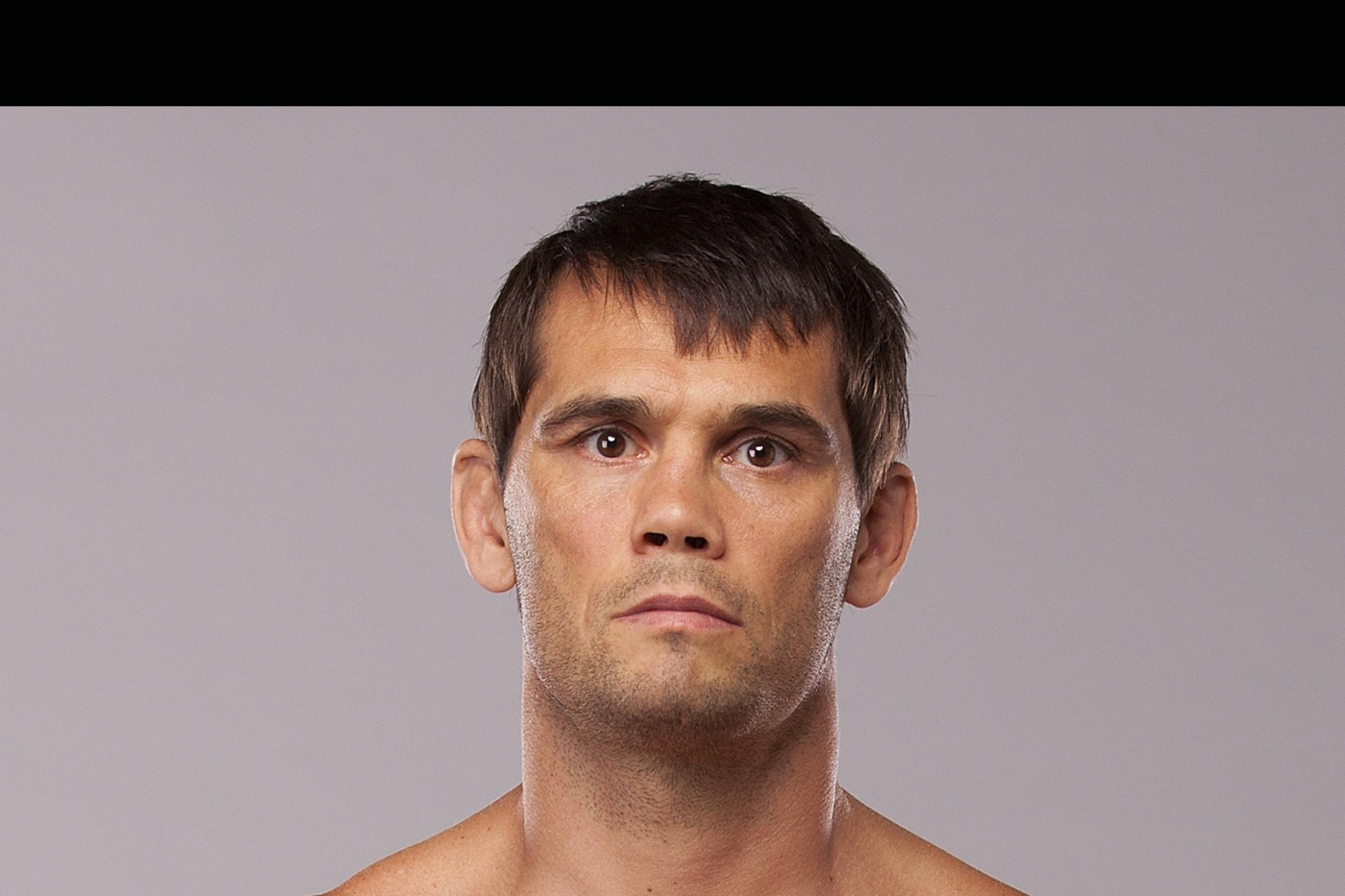 Rich Franklin Embodied The "We Are All Fighters" Mantra

The 2019 Hall Of Fame Inductee And Former World Champion Has A Legacy That Will Never Be Diminished
By Thomas Gerbasi • Apr. 16, 2019

There was a time when the UFC wasn’t on ESPN, when international shows weren’t a regular part of the promotion’s yearly schedule, and when getting mainstream press without the phrase “human cockfighting” in it was a near impossibility.

And during the time just after the first season of The Ultimate Fighter started the mixed martial arts explosion in 2005, when the UFC needed an ambassador, someone who shattered the stereotype the uninformed had of prizefighters, the man who usually got the call was Rich Franklin.

There was no surprise why. Not only a world-class fighter, Franklin was everyman, a former high school math teacher who chased a dream, espousing all the virtues we ideally want in our sporting heroes. So wherever there was negative publicity surrounding an event or the sport, Franklin was there to educate and illuminate.

For that reason alone, Franklin deserved a place in the UFC Hall of Fame. But when “Ace” gets inducted into the Pioneer wing of the hall this summer, he does so as not only one of the sport’s most important figures from a pivotal time in the growth of MMA, but as a former middleweight champion who fought the best of the best both before, during and after his reign over the 185-pound weight class.

“At the end of a career, you look back and, win or lose, I always put things on the line for the fans,” Franklin said. “I wanted to put on exciting matches and I wanted to compete against people that get me excited to get in the cage. And that's what I did.

A native of Cincinnati, Ohio, Franklin turned pro in 1999 while still teaching high school math, but as the wins piled up, it was clear that he had the talent to make a mark in the fight game, so he ultimately opted to leave teaching to go title hunting.

In 2003, Franklin entered the Octagon for the first time to face Evan Tanner. It was a precursor of things to come, as “Ace” never got a gimme in the Octagon.

“My first fight in the UFC was against Evan Tanner,” Franklin said. “He was 6-1 (in the UFC) at the time, the only person he lost to was Tito (Ortiz), and I was swimming with the sharks right away. Top five guys for my entire career. (Ken) Shamrock may have been a little outside of the top five at the time I fought him, but still a tough opponent. But when you look at my career, the only people you could argue were not top five or former champions was maybe Edwin Dewees, and he was an up and comer just like me; he was a tough kid. Then I won the title and from that point on I'm defending my title against the top-ranked opponent, going against David Loiseau and Nate Quarry and Anderson Silva. And after I lost my title I went down the line and most of the people I competed against after that were champions, whether it was PRIDE, UFC or Strikeforce.”

The resume speaks for itself. After beating Tanner at UFC 42, Franklin submitted Jorge Rivera, then stopped Ken Shamrock in the main event of that first TUF Finale. Two months later, Franklin stopped Tanner a second time, this time earning himself the UFC middleweight title. The goal had been reached, and nothing was ever going to be the same again. 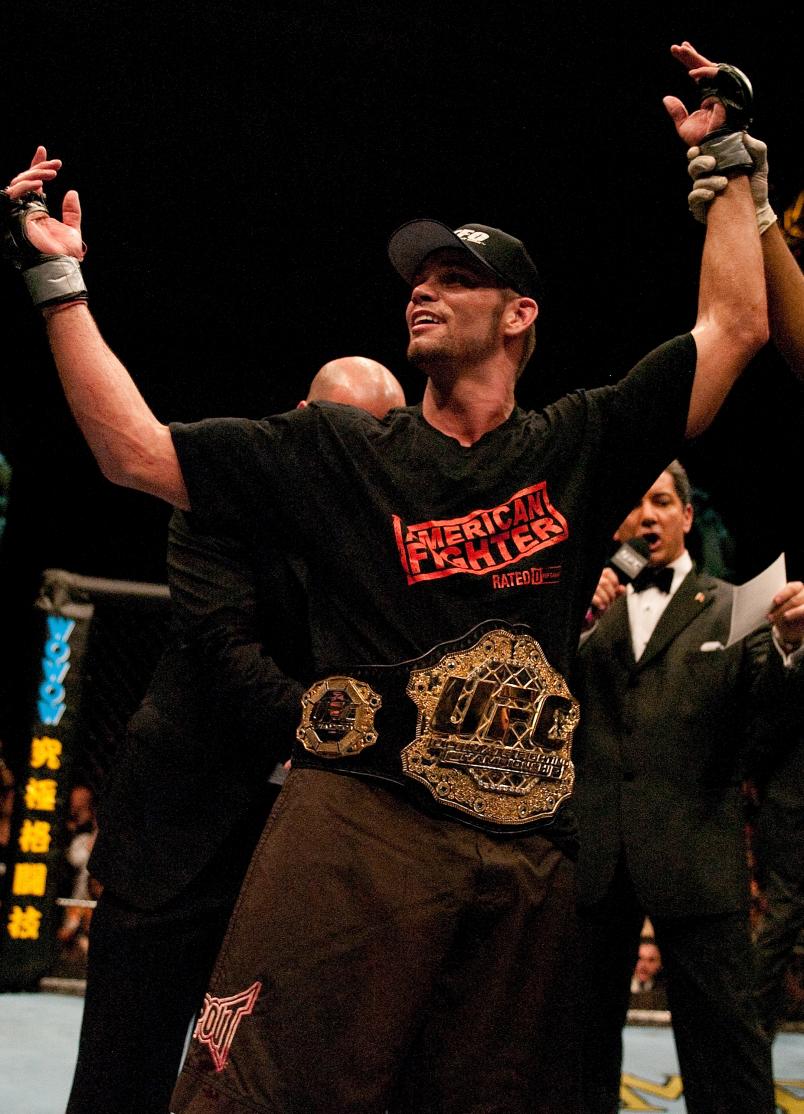 “The night that I won my title, I fought in Atlantic City, won my title, and you go from an arena of 12,000 screaming fans immediately into a locker room where I have pictures of myself sitting in my locker room with my hands in buckets of ice, my ankle in buckets of ice, my coach rubbing out knots on my thigh from getting kicked on, and you go from this adrenaline high to this quiet environment,” Franklin recalled. “And this was at a time when we could just walk back to my hotel room without the need for security. And I walked back to my hotel room and it was me and a close group of my friends and coaches - maybe four of us. I had my belt, I set it down on the bed and I just stood there and stared at the belt and I looked at my team and said, 'I don't feel like a champion.' And at that time, I think I was so focused on the goal that I really forgot to enjoy the journey. And it just sped up from there.”

In addition to stopping Nate Quarry and decisioning David Loiseau in defense of his title, Franklin was coaching against Matt Hughes on season two of The Ultimate Fighter, making numerous appearances and sitting for interview after interview. It was a schedule few could manage, but Franklin handled it without complaint.

“It went into overdrive and the next thing I know, I'm flying all over the place, I'm doing so much PR, and there were articles written about me and the fans referred to me as the company man because I was filling in for matches when somebody got injured at the last minute, everything that needed to be done to help build this industry at the time,” he said. “So yeah, it made everything a blur. As a young man, you talk to people and they say life will just pass you by in the snap of a finger. And then suddenly you're in that position where here I am looking back at the last 20 years of my life and thinking, 'Man, that happened so quickly.' So I was grinding so much that I don't know if I got to enjoy the process as much as I could have. But I'll say this, if you take the time to actually enjoy the process, I'm not sure that you're grinding as hard as you need to be to be successful. So the two may be mutually exclusive.”

In October 2006, Franklin lost his title to a pretty fair fighter named Anderson Silva, who only went on to reign until 2013. The rematch in 2007 was a repeat of the first fight, and with the odds of Franklin getting another crack at Silva slim, he approached his career with an intention to only have big fights, and he had more than his share, facing off with Dan Henderson, Wanderlei Silva (twice), Vitor Belfort, Chuck Liddell, Forrest Griffin and Cung Le. The Le fight took place in 2012, but it wasn’t until 2015 that “Ace” officially called it quits.

Yet despite being 44 years old and nearly seven years removed from his last fight, the One FC executive admits that the itch is still there.

“You always get the itch,” Franklin laughs. “From a career standpoint or even from a sports standpoint, this is my first love. I was just in the gym grappling yesterday and you can't take that out of a person. Just because you retire doesn't mean that it just goes away. I'm 44 years old, I'm not 24 anymore and as I travel around and recruit talent for One’s Warrior Series, these guys that I'm recruiting, I frequently find myself on the mat with kids that are less than half my age and I can tell that I'm getting a little bit older. I still feel I'm at that point where I think I could compete with some of the best. I couldn't consistently do it, but I feel like that it's still there. It's not something you can just remove from a person. If you love chocolate cake and somebody says you can't have it anymore, you don't wake up tomorrow and say, 'Man, I hate chocolate cake.'”

Franklin laughs, at peace with the fact that he will always be a fighter at heart and also at peace with a career that landed him in the UFC Hall of Fame. But at times like these, there are tough decisions to be made, such as revealing the one fight that truly represented who he was as a fighter. But like that chocolate cake, you can’t have just one bite.

“I'll say this first,” he chuckles. “Unfortunately, I didn't want to create this kind of legacy about myself that I'm this tough, resilient athlete that will just put myself through hell to win something. I would rather be the guy who was untouchable.”

Perfect is boring, though, and Franklin was never boring. So he’ll still have to make a pick…or two…or more. 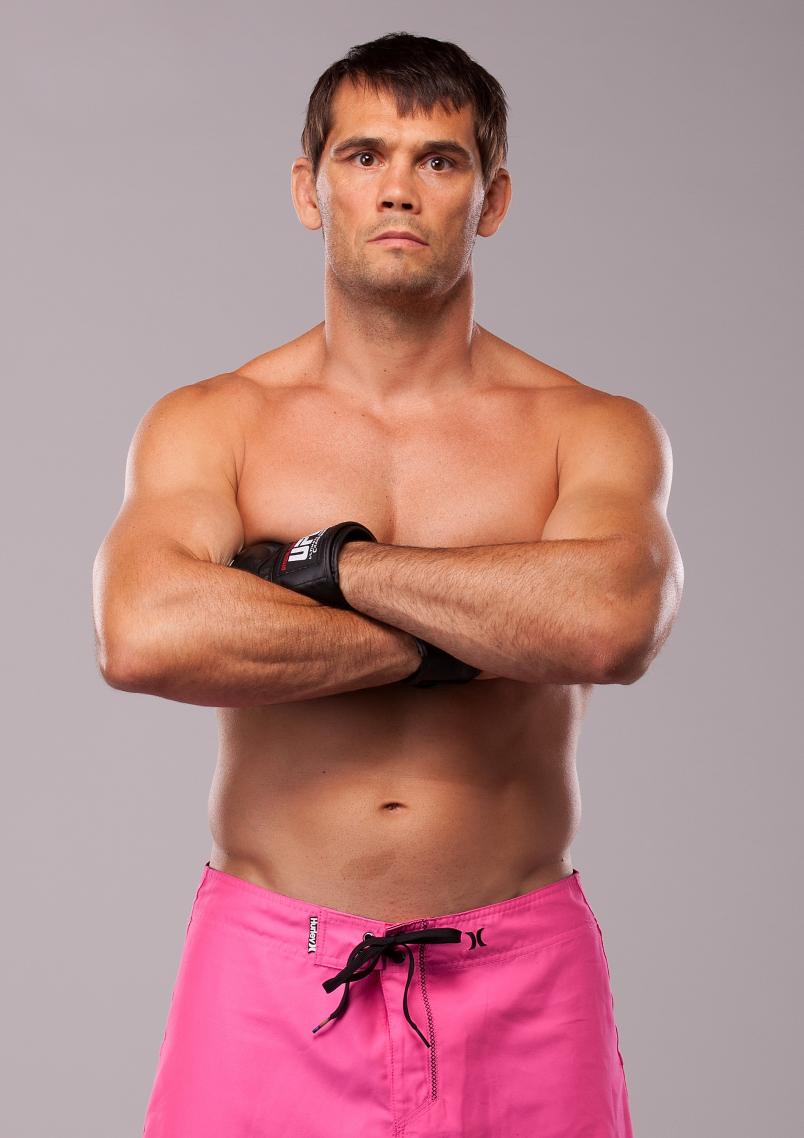 “Either of my Wanderlei fights, specifically my second one, is a good indicator of who I was,” Franklin said. “Maybe the Dan Henderson fight. I've always been outspoken about the fact that I felt like I won that fight anyway, but it was a tough fight. The Chuck Liddell fight, the David Loiseau fight, fighting through broken arms and broken hands. But in the second Wanderlei fight, he dropped me in the second round and for me to actually come back from that, I watch that now and I wonder, 'How did I survive that?' Not only did I survive, but I got up at the end of that round and I came back out in the third round and my corner is yelling instructions and I don't even know what they're saying to me, but whatever they were saying was sinking in somehow, and I was on autopilot. I came out in the third round and established my jab right away and went right back to work like nothing even happened.”

It was Rich Franklin in a nutshell. Knock him down, and he’ll come back even harder. It may have been in the next round or the next fight, but you couldn’t keep this good man down. Maybe it’s why when he spoke to the press both here and abroad, if they were skeptical about this “new” sport called mixed martial arts, all it took was one conversation to turn those skeptics into fans.

“Times were different back in the early 2000s and in '05 when I won my title,” Franklin said. “Mixed martial arts wasn't established in the States, there were people who were referring to it as human cockfighting and so you had somebody like me, who was a former high school math teacher that they kind of relied on to say, 'Hey, look, there's a better image to this. More people are doing it, not everybody is out there getting in bar fights and stuff like that.' And that was the image the sport had at the time, so they had people like me to break those stereotypes down.”

Franklin pauses, then tells of a recent encounter with a fellow Ohioan in the Philippines.

“I was filming in Cebu a couple weeks ago and this guy happened to walk by me and he looked at me and said, 'Hey, Rich Franklin. I'm a huge fan, I'm from Cincinnati.' And then he said, 'Thanks for all the entertainment you gave me over the years, but more importantly, thanks for being a good representative of Cincinnati and a good role model for kids.' All those intangibles, aside from what you do on fight night, it's something I did for the sport. And the fan recognition of what I stood for as a person, that means a lot to me when it comes down to receiving an award like this.”