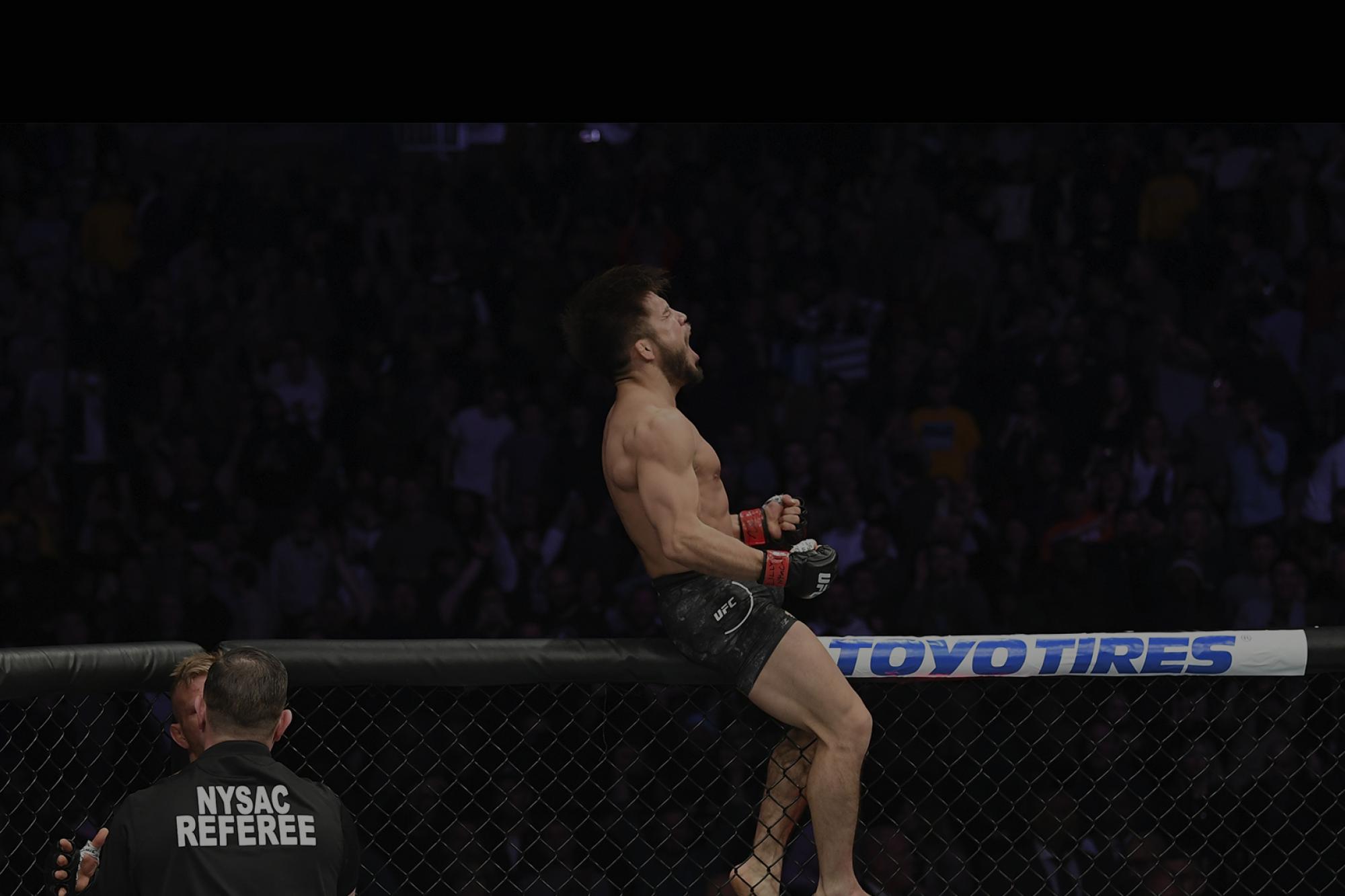 Here's What We Are Talking About After Saturday's Fights
By Steve Latrell and Gavin Porter • Jan. 20, 2019

What a way to start of the new era of UFC. The excitement included eight finishes, with the cherry on top being when flyweight champion Henry Cejudo put an end to his super fight with bantamweight champion TJ Dillashaw in just 32 seconds. The TKO victory brought the entire Barclays Center in Brooklyn, New York to an uproar.

There is plenty to discuss after last night. Let’s jump right in.

Last Friday, the UFC announced its updated and redesigned championship belt. Lots of history, storytelling and features were incorporated into the new hardware, including a space where the champ will have his or her name engraved.

The first UFC fighter to get his named on the new bling will be Henry Cejudo, who punctuated the debut ESPN-UFC partnership with his first successful title defense since dethroning the GOAT, Demetrious Johnson, at UFC 227.

Cejudo needed only 32 seconds to topple TJ Dillashaw and, along with it, topple the bantamweight champ’s dream of holding multiple belts simultaneously.

The moment was not lost on Cejudo, who soaked in the site of his newest prize while doing backstage interviews.

"I got two of the greatest names under my belt,” he beamed, his eyes going up and down the strap. “Demetrious Johnson and TJ Dillashaw."

It would be tempting to dismiss the storyline that Donald Cerrone is fighting for his child as feel-good fluff. But with a second straight assassin-like finish of a tough opponent, even the most jaded fight fans can’t deny the man is fighting with purpose. In addition to his purse, Cerrone went home with an extra $100,000, thanks to two bonuses: one for Fight of the Night and one for Performance of the Night.

Alex Hernandez, like Mike Perry before him, is not an easy out. Visibly, Hernandez had the edge in speed and pressure, but Cowboy has just been around the block too many times, and he seemed to know everything Hernandez was about to do before he did it.

When Cowboy first announced he was dropping down to lightweight to make a run for the belt before he rides off into the sunset, it raised more than a few eyebrows. But after watching his steely glare Saturday night, nothing seems implausible.

In the aftermath of his loss, TJ Dillashaw did not mince words, declaring the fight was “stolen” from him with an early stoppage, and demanding an immediate rematch.

For his part, UFC president Dana White didn’t entirely disagree, suggesting that when a superfight of this magnitude is underway, he would have “let them fight,” and declaring the outcome a “horrible stoppage.”

Both Dillashaw and White congratulated the champion on his successful defense, and made it clear their opinions were not to take anything away from the stellar performance of Henry Cejudo.

If Gregor Gillespie, Joanne Calderwood, Cory Sandhagen, Alonzo Menifield and Geoff Neal weren’t on your contender radar before UFC Brooklyn, they should be now.

Gillespie added another win to his unblemished record, finishing the gritty Yancy Medeiros with a single second remaining in the second frame. Gillespie’s overwhelming pressure, world class cardio and dominant wrestling truly smothered and broke Medeiros. The No. 15 ranked Gillespie said after the win that it’s time for him to fight up in the lightweight division, and he’s absolutely right.

Calderwood fought off a top prospect in Ariane Lipski in convincing fashion. We’ve seen a new Jojo since her fight in Lincoln, Nebraska last August. Look for Jojo to start breaking into that flyweight top ten and make some noise.

Then there was the incredible performances by Sandhagen, Menifield and Neal. All three guys displayed potential that has the match-makers at UFC licking their chops. Sandhagen described his style of fighting as “ADHD in the cage” and his constant attempts to finish the fight prove that he’s a killer out to put on a show.

Big things are happening at Fortis MMA and the evidence can be found in performances by teammates Menifield and Neal. Menifield reminded everyone that he has serious knockout power and if you’re in his way, he is going to unleash “secret ferociousness” and go for a devastating finish. Expect to see Menifield start getting attention at light heavyweight. Meanwhile Neal fought the durable and tough Belal Muhammad to a dominant decision victory. Neal’s left hand found its mark whenever he wanted and looks to be the perfect combination of efficient and powerful. Don’t be surprised if he fights his way up the ranks in 2019.

Steve Latrell and Gavin Porter are digital producer for UFC.com, follow them on Twitter at @TheUFSteve and @PorterUFCNews.