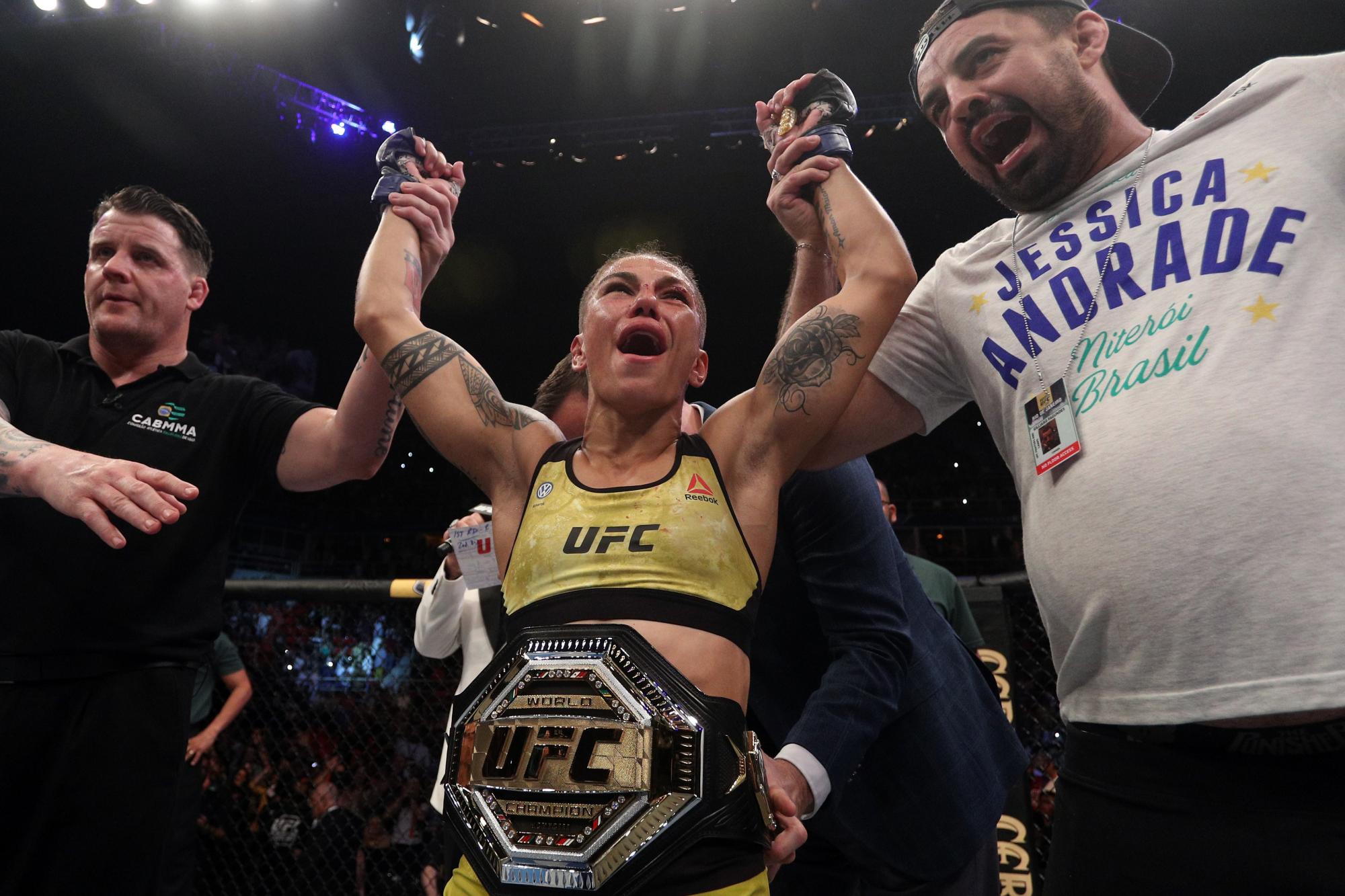 With seven finishes out of twelve fights, the mixed martial arts fans of Rio De Janeiro were in for one heck of an event. And despite Brazilian fan favorites Thiago Alves, Jose Aldo and Anderson Silva coming out on the losing side of their match-ups, the hometown fans were in for a treat with the main event.

FIGHT OF THE NIGHT
Rose Namajunas vs Jessica Andrade

Through nearly eight minutes of action Rose Namajunas was dominating Jessica Andrade in their UFC strawweight championship bout. But then seemingly out of nowhere, Namajunas’ incredible performance came to a crashing halt.

Andrade’s nickname is “Bate Estaca” which literally means “Pile Drivier,” and now the world knows why. Her second slam of the night was a thing of beauty, maneuvering her head to the side in order to bring Namajunas’ down to the canvas with force. It was objectively terrifying, and reminder of just how unpredictable MMA can be on any given night.

Before the slam, Namajunas was picking Andrade apart, particularly in the first round. Namajunas dropped Andrade with a big knee, and possibly looked to be in the finest form of her career thus far. She carried that momentum into the second round, but the night and the strawweight championship belt would belong to Andrade and Brazil.

Andrade also earned a $50,000 performance of the night bonus for the championship bout.

Performances of the Night
Warlley Alves

Warlley Alves completely dominated Sergio Moraes in the first two rounds of their welterweight match-up and in the third round, Moraes came out with a new sense of urgency. Alves weathered the storm as Moraes pressured forward and did something that he has yet to accomplish in UFC competition.

Viciously knock his opponent out.

Alves has earned victories by submission and by doctor’s stoppage, but none of his seven UFC victories have come via KO/TKO. That changed Saturday night. The exchange started with a massive knee to the head of Moraes which Warlley and the followed it up with a devastating uppercut.

It was a great moment for Alves, who needed a performance just like this one to get back into the mix at welterweight.

It’s impossible to describe Jessica Andrade’s game without using the words “strong” or “strength.” Like nobody else in her division, Andrade packs one-punch knockout power.

On this night, her trademark strength was used to fend off an exceptional performance by her opponent, and get in just close enough to execute a slam that ended the reign of Namajunas as champion. For this Herculean feat, Andrade went home with a second bonus for Performance of the Night.

Jared Cannonier continues to make a name for himself. Last November he jumped into the middleweight rankings by starching David Branch. On Saturday night he did it by defeating Anderson Silva with a tremendous inside leg kick. As unfortunate as it is to see Silva end his night with an injury, you can’t take anything away from Cannonier, who performed well under the pressure of hostile territory.

Alexander Volkanovski is your number one featherweight contender, folks. “The Great” looked great indeed against the legendary Jose Aldo, out-striking and out-grappling The King of Rio on the way to a 30-27 x 3 unanimous decision win. It’s hard to imagine Volkanovski being left out of the next featherweight title shot considering he’s 7-0 in the UFC with wins over the likes of Aldo, Chad Mendes and Darren Elkins.

In a tough, back-and-forth fight between Irene Aldana and Bethe Correia, it was the well-rounded skill set of Aldana that made the difference. In the final round of their fight Aldana took Correia’s back quickly transitioned into an arm bar and forced Correia to tap in an excellent effort.

Raoni Barcelos and Ryan Spann continued to make a splash by finishing their opponents by TKO and KO, respectively. Barcelos switched gears in the second round of his bout, dropping Carlos Huachin with a huge shot and finishing him with a barrage of strikes. Spann needed just over two minutes to knock Brazilian legend Antonio Rogerio Nogueira out, hitting him with an uppercut that sent him cascading to the canvas.

Both Luana Carolina and Viviane Araujo made impressive debuts, securing their first UFC wins. Araujo’s performance against ranked bantamweight Talita Bernardo was particularly impressive as Araujo is truly a strawweight, who took the fight on three days notice at bantamweight. Araujo knocked Bernardo out with a massive right hook that definitely caught the attention of UFC fans everywhere.

FIGHT OF THE NIGHT – Rose Namajunas vs. Jessica Andrade

PERFORMANCES OF THE NIGHT – Warlley Alves and Jessica Andrade