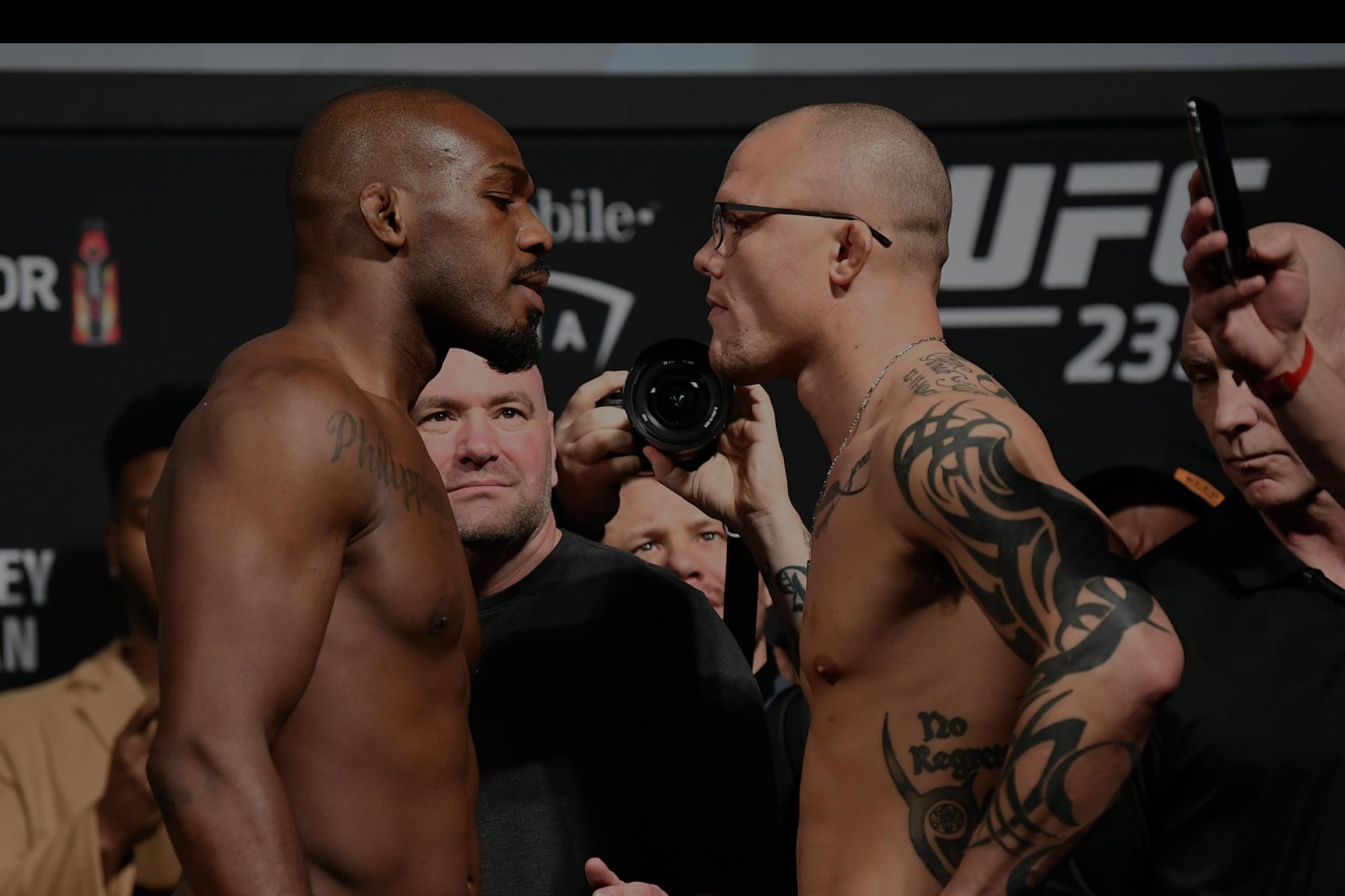 Hannah Cifers picked up her first Octagon victory in the strawweight opener, as she outpointed Polyana Viana via split decision.

Cifers was on the attack from the start, and while Viana was able to land some counter kicks over the course of the frame, it was the North Carolina native doing the more effective work, punctuated by some solid ground-and-pound and a knockdown with a little over a minute left.

In the second minute of round two, the action went back to the mat, with Cifers on top but Viana having no issue working her strikes from the back, and in the third, the Brazilian kept the work rate high, but so did Cifers, with the two exchanging big shots until the final horn.

What was shaping up to be a competitive battle turned in Chiasson’s favor as the two broke from a clinch and Chiasson rocked Mazany with a left hand. The New Orleans native went on the attack, and a final right hand put Mazany down and out, with referee Chris Tognoni halting the bout at 1:49 of the opening round.

After going the distance in his Octagon debut, unbeaten middleweight phenom Edmen Shahbazyan got back to his first-round finishing ways, stopping fellow Contender Series alum Charles Byrd in just 38 seconds.

Byrd’s takedown attempt in the opening minute came up short, but the Texan stuck with it, leading to a series of elbows from the 21-year-old Shahbazyan that put Byrd (10-6) on the deck. A right hand followed as referee Mark Smith stepped in and stopped the bout, marking Shahbazyan’s eighth first-round knockout in nine wins without a defeat.

After a strong start from Gall on the feet, the 37-year-old Sanchez was able to score a series of takedowns and then keep the fight on the mat for the majority of the opening round.

Gall was clearly winded as the second stanza began, and while he landed some hard punches, a knee from Sanchez hurt him with 3:30 left, and the “Nightmare” moved in for the finish as the bout went to the mat again. Gall hung in there for a spell, but the relentless attack of Sanchez eventually forced referee Marc Goddard to step in and stop the fight at the 4:13 mark.

Cody Stamann bounced back from his first UFC loss to Aljamain Sterling, winning a unanimous three-round decision over Alejandro Perez in a meeting of bantamweight contenders.

The first round was a close one, with Stamann playing the role of aggressor, but unable to get the fight to the mat, as Perez’ takedown defense was rock solid. On the feet, both had their moments, and the same was the case for the second round, but in both frames, Stamann was the busier of the two fighters.

Perez opened the third with a slam to the mat, but Stamann was back to his feet quickly, only to later get caught by the best shots of the fight by “Turbo.” But it was too little too late, as Stamann took the nod by scores of 29-28 twice and 30-27.

The Johnny Walker Express kept rolling in UFC 235 prelim action, as the rising light heavyweight star scored his third consecutive highlight reel knockout, this one over No. 14-ranked contender Misha Cirkunov in a bout that took just 36 seconds.

After a brief feeling out process to begin the bout, the two engaged and Walker struck, dropping Cirkunov with a flush right flying knee. On the mat, a follow-up series of strikes ended matters, with referee Herb Dean stepping in to stop the bout.

With the win, the No. 15-ranked Walker, who apparently separated his shoulder celebrating after the bout, moves to 17-3. Cirkunov falls to 14-5.

Stephens was the aggressor throughout the opening frame, but Magomedsharipov landed the stronger shots, whether a stiff straight left or kicks to the calf. Stephens got in his own kicks as well, but as far as his big right hand, the “Lil’ Heathen” wasn’t able to land it.

Stephens did get through with the right hand in the second minute of round two, but it didn’t interrupt the offensive game plan of Magomedsharipov in the slightest, and moments later, the Dagestan product scored his first takedown of the fight. With 1:45 left, Magomedsharipov took Stephens’ back, but he was unable to finish the Iowan before the end of the frame.

In the third, Stephens made his charge, but despite some strong moments he was unable to finish off Magomedsharipov, who took the decision by identical scores of 29-28.

Brazil’s Pedro Munhoz made quite the statement in the main card opener, knocking out former bantamweight world champion Cody Garbrandt in the first round.

The first round was fought at a measured pace…at least for a while. Then late in the frame, Munhoz’ leg kicks began taking a toll, and after Munhoz went high with a kick, Garbrandt got rocked and went to the deck. Upon rising, “No Love” went after the knockout recklessly and as Munhoz fired back eagerly, making for plenty of crowd-pleasing exchanges, Garbrandt got caught with a right hand and was dropped. Munhoz followed up, and referee Marc Goddard stepped in, stopping the fight at 4:52 of the opening round.

It was an interesting first round, with Zhang the busier of the two fighters, but Torres the one who landed some hard right hands in close that marked up Zhang’s face.

Zhang continued to mix things up nicely in the second stanza, and again, whether standing or on the mat, just when Zhang appeared to be pulling away, Torres closed the gap with her own offensive attacks.

The third began with some good exchanges on the feet, but as the round progressed, Zhang’s volume striking and grappling strength began to become more pronounced, and she ended the fight in the top position firing off strikes on the trapped Torres.

The long-awaited UFC debut of 2008 Olympian Ben Askren certainly didn’t lack for excitement, with the unbeaten newcomer having to survive the roughest moments of his pro career before scoring a first-round submission win over former world welterweight champion Robbie Lawler.

Lawler stunned the crowd and Askren with a slam as the bout began, and a barrage of ground strikes opened up Askren’s face and nearly finished the fight, but the Wisconsin product was able to survive and get back to his feet. After eating a couple hard knees, Askren was able to lock Lawler up against the fence and sink in a bulldog choke. Lawler’s arm dropped in the midst of the choke, prompting referee Herb Dean to stop the fight at the 3:20 mark of the opening round, but as soon as Askren released the choke Lawler protested that he wasn’t out.

It was a masterful effort by underdog challenger Kamaru Usman in his UFC 235 co-main event against Tyron Woodley, and after five rounds at T-Mobile Arena, the Nigeria native transitioned from challenger to champion as he scored a shutout unanimous decision to take the welterweight crown and become the first African-born fighter to wear UFC gold.

“I might not be the best striker or best pure wrestler, but when it comes mixing it all up, I am the best welterweight in the world right now,” said Usman.

Usman looked for a single leg takedown to start the fight and he got it, despite a brief guillotine choke attempt by Woodley, and that set the tone for the bout. The champion got up to his feet fairly quickly, and the two remained locked up for a spell before Woodley broke free. Usman immediately sought the takedown again, and while Woodley remained upright, Usman was landing good shots to the body while in the clinch. After a restart from referee Marc Goddard with a minute left, Usman again landed solid close range shots before the end of the round.

Going right back into the clinch, Usman’s fast start extended into the second round and was punctuated by a big elbow followed by a huge takedown. Usman went right into the mount position on his bloodied foe, and he alternated with ground strikes and smothering pressure. In the final minute, Usman looked for an arm triangle briefly before finishing the round with more ground strikes.

Woodley tried to start fast in round three, but Usman dodged any incoming fire and bulled the champion into the fence, digging in with thudding body shots along the way. Goddard went on to restart the action twice, but Woodley continued to have issues staying off the fence, putting another round in the challenger’s bank.

Woodley attempted a guillotine choke and pulled guard in the opening minute of round four, but Usman got loose with no problem and took over from the top position. After another odd restart from Goddard, Usman proceeded to add knees in the clinch and once that clinch broke, Usman began landing blistering shots on Woodley, who was rattled but still standing when the horn sounded.

Another guillotine attempt by Woodley began round five, but Usman played it cool and dumped the Missouri native on the deck. Usman fired off strikes from the top position, and Woodley had no answers for him. Now or in the previous 24 minutes. And that's why there's a new welterweight champion.

UFC light heavyweight Jon Jones was in control from start to finish in his UFC 235 main event against Anthony Smith at T-Mobile Arena, and while Jones admitted it wasn’t his best effort, it was more than enough for him to retain his title and extend his unbeaten streak to 16.

The fighters stood perilously close to each other in the opening round, Smith doing a lot of feinting while looking for an opening while Jones fired off kicks from all angles. But it was a head kick by Smith that got Jones’ attention and prompted some clinch work by the champion, but the two broke fairly quickly. Back at range, it was Jones again controlling the fight with his kicks until the round ended.

Jones stunned Smith with a front kick early in round two, and he kept the kicks coming, followed by an elbow and a clinch to cap off the first minute. Back at range, Smith landed a good overhand right, but Jones was unmoved as he got back down to business, punctuating more kicks with a left hand down the middle.

Opting to work more on his grappling in the third, Jones continued to control the action, with a big takedown punctuating another big round.

Jones fired off elbows in the fourth, continuing to vary his attack to keep Smith guessing. Another takedown followed, and Jones’ ground assault intensified on the bloodied challenger. With two minutes left, Smith got back to his feet, but only momentarily. In the midst of the one-sided bout, there was a little drama when Jones landed an illegal knee to the head of the downed challenger, prompting referee Herb Dean to dock Jones two points.

Cleared to continue, Smith knew he needed a finish in the fifth round to win, and while his spirit was willing, fatigue quickly set in and Jones went back to his dominant clinch work. It wasn’t spectacular, but it was effective, and Jones had the first defense of his second title reign in the books.

On to the next.