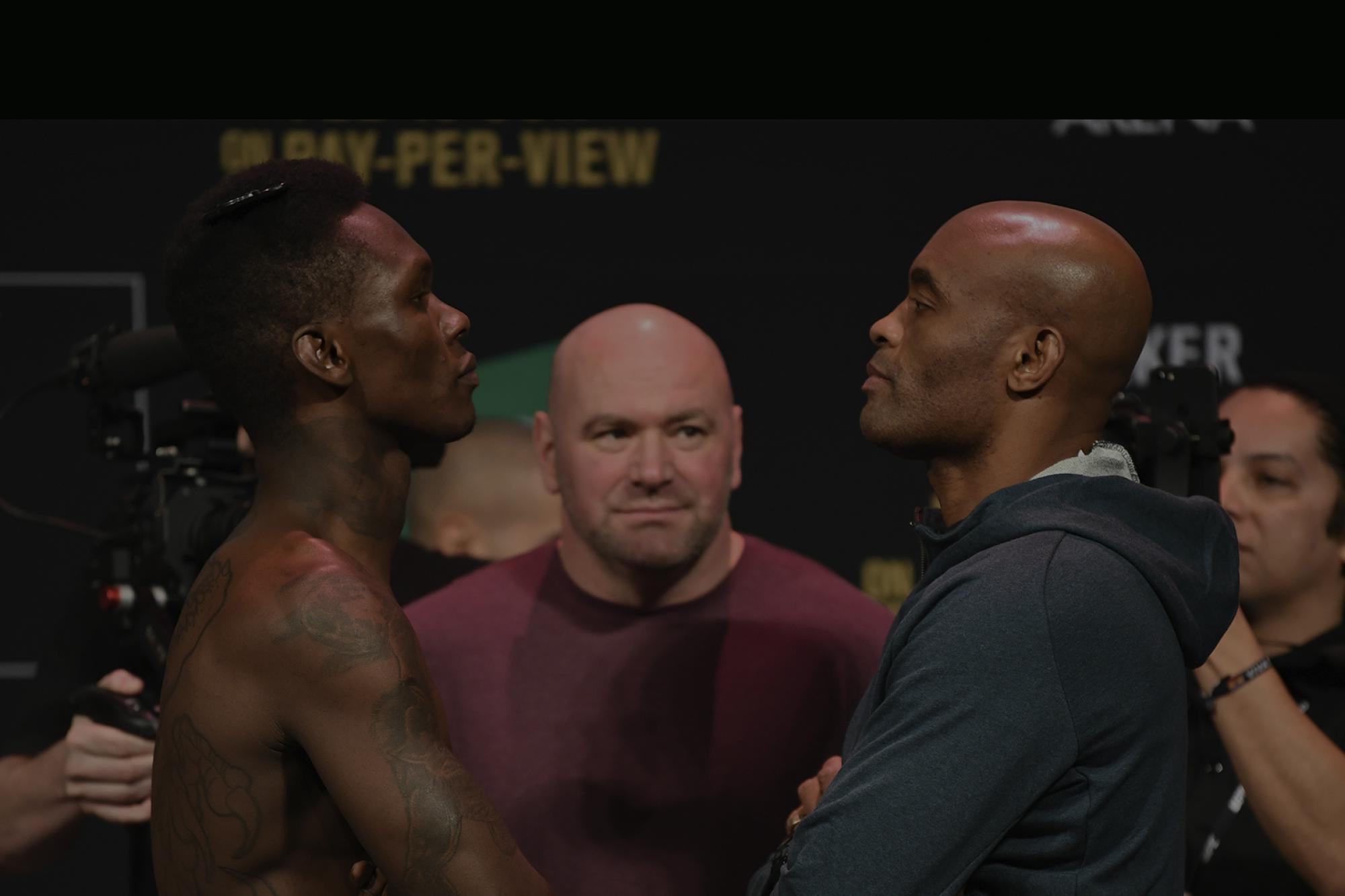 Unbeaten middleweight contender Israel Adesanya got the win over one of his fighting heroes in the UFC 234 main event, but 43-year-old future Hall of Famer Anderson Silva showed that he’s still got some gas left in the tank as he extended Adesanya the three-round distance before losing a unanimous decision.

“Anderson, thank you,” said Adesanya. “You’ve been doing this a long time. I appreciate you.”

“I love my job,” said Silva, the former middleweight champion. “I know it’s tough. But this is my heart, this is my life. That’s why I continue to fight.”

Outside of a kick to the leg, there was no offense from Silva in the opening two minutes, allowing Adesanya to take an early lead, but after “The Spider” got wobbled briefly by a right hand midway through the frame, Silva began to pick up the pace, getting a rise out of the crowd as he went on the attack. Adesanya wasn’t able to hurt Silva again, and the Brazilian icon did acquit himself well as he dodged some potential fight-ending blows from “The Last Stylebender” while both did their share of showboating before the horn sounded to end the round.

Silva dropped his hands in round two and dared Adesanya to hit him, and the rising star obliged, clipping Silva with a 1-2. Silva took the blows with no issue and he later landed a hard right hand and followed up with a solid flurry at close range. With under two minutes left, Silva landed two hard right jabs and took the role of aggressor, but Adesanya played it cool as he looked to counter. Silva’s forward motion down the stretch may have done him well on the scorecards, though.

With chants beginning for Silva in round three, the former champ kept playing to the crowd, and after eating some shots from Adesanya, he nearly landed a flying knee. Soon, Silva’s right eye began swelling shut, and the Brazilian called for Adesanya to trade with him against the fence. Adesanya wouldn’t bite, instead calling Silva to the middle of the Octagon, and Silva followed, looking loose as the time ticked away. All the while, though, Adesanya kept landing enough blows to maintain his lead, and while Silva shook off the shots, he wasn’t able to fire enough back to secure the win.

Co-Main Event
Lando Vannata def Marcus Mariano by submission due to an kimura at 4:55 in Round 1
Social Post

Lightweight action hero Lando Vannata made the most of his late upgrade to the UFC 234 co-main event slot, finishing Brazilian newcomer Marcos Mariano via submission in the first round at Rod Laver Arena in Melbourne.

The lanky Mariano opened up the fight with a variety of hard kicks, prompting a takedown by Vannata in the second minute. From there, Vannata steadily broke Mariano down with ground strikes, and then just before the end of the round, he moved into north-south position and landed the kimura that forced the Brazilian to tap out at 4:55 of the opening frame.

With the win, Albuquerque’s Vannata improves to 10-3-2. Curitiba’s Mariano falls to 6-5.

Now 3-0 in the Octagon, Ricky Simon scored the biggest win of his career, as he shut out bantamweight contender Rani Yahya over three rounds.

The No. 15-ranked Yahya (26-10, 1 NC) wasn’t able to get the fight to the mat in the opening round, but that wasn’t any problem for the Brazilian submission wizard early on, as he landed some good shots while standing. But with under three minutes left, Simon began finding his mark, and he scored two knockdowns while landing several hard punches to close the round in the lead.

With Simon (15-1) refusing to play the ground game with him, Yahya settled into a striking game that rocked Simon with a little under two minutes left, but the Vancouver product did put his foe down with a hard shoulder strike, evening the score a bit as he dealt with a cut over his eye from a clash of heads.

In the third, Simon’s pace and punches were wearing Yahya down, and he even closed the round with some groundwork that put an exclamation mark on a Simon victory via scores of 30-27 twice and 30-25.

Montana De La Rosa def Nadia Kassem by submission due to an Arm Bar at 2:37 in Round 2
Social Post

Flyweight contender Montana De La Rosa moved to 3-0 in the Octagon, removing Australia’s Nadia Kassem from the ranks of the unbeaten via second-round submission.

De La Rosa came out swinging, backing Kassem to the fence and getting her to the canvas in the opening minute. De La Rosa kept her opponent grounded for the rest of the frame, and while she wasn’t spectacular from the top position, she was effective in terms of winning the round.

The beginning of round two mimicked the bout’s opening, with a swarm of strikes setting up a De La Rosa takedown. This time, De La Rose amped up the offense, nearly locking up an armbar. Kassem refused to give in, but the second time around, she was forced to tap, with the end coming at 2:37 of the second stanza.

Jimmy Crute def Sam Alvey by TKO at 2:49 in Round 1
Social Post

Crute almost saw a victory elude his grasp early on, as he dropped Alvey with a right hand but then walked away, assuming the fight would be stopped. It wasn’t, and while Alvey rose to his feet, he was still wobbly. The Californian was able to catch a Crute kick and get the fight to the mat, but Crute fired off a series of unanswered blows, prompting referee Marc Goddard to stop the fight at the 2:49 mark and igniting a heated protest from Alvey, but to no avail.

Ma seemed to be baffled by the in and out movement of Smith, who took his time pecking and poking at the Busan native in the early going. And once Ma decided to engage with a little over a minute left, Smith pounced, rocking his foe with a 1-2 before putting Ma down and finishing him with ground strikes. The official time of referee Herb Dean’s stoppage was 3:53 of round one.

The first five minutes followed a steady pattern, with Young stalking Arnett and Arnett content to counterpunch. That worked for a good spell for the “Golden Boy,” but Young’s pressure ultimately allowed him to land several hard shots before the horn sounded.

There was more of the same in round two, and while Arnett was sharp with his jab, in the final minute it was Young landing a series of power shots that got Arnett’s attention and prompted him to fire back with more urgency.

The third continued to be a war of wills, but Young’s greater activity rate gave him a slight edge that became a big one when he scored a flash knockdown of Arnett with a right hand in the closing seconds of the bout.

New Zealand’s Kai Kara-France got a fight out of Brazilian newcomer Raulian Paiva but was still able to eke out a three-round split decision win in their flyweight bout.

Auckland’s Kara-France (19-7, 1 NC) was on target with his right hand early and often, and while Amapa’s Paiva (18-2) took the blows well, he wasn’t able to get the fight to the mat or do enough to take the round away from “Don’t Blink.”

After a brief mat exchange early in round two, Kara-France landed another right hand and looked for a takedown, perhaps feeling the effects of Paiva’s kicks to his lead leg, and the Brazilian seemed to be gaining momentum as the fight progressed. Kara-France did draw blood, though, and he still landed his share of hard shots at close range.

The third round was another close one, but when the scorecards were tallied, the judges saw it for Kara-France via scores of 29-28 twice and 28-29.

Kyung Ho Kang def Teruto Ishihara by submission due to a Rear Naked Choke at 3:59 in Round 1
Social Post

There was no feeling out process between bantamweights Kyung Ho Kang and Teruto Ishihara, and the result was an entertaining scrap that ended when Kang submitted Ishihara with a little over a minute left in the first round.

Wasting no time getting down to business, Osaka’s Ishihara (11-7-2) drew first blood when he knocked Busan’s Kang (15-8, 1 NC) down with a left punch to the head. Kang bounced back and went into the pocket to trade blows with Ishihara as the crowd roared. But as soon as the fight went to the mat, Kang was in his world, and he sunk in the rear naked choke that ended the bout at the 3:59 mark of the opening round.

Jalin Turner made his highly-anticipated visit to Australia one to remember, as his return to lightweight resulted in a first-round knockout of Octagon newcomer Callan Potter.

The bout went to the mat within the first 30 seconds, just where Brazilian Jiu-Jitsu black belt Potter wanted it, but Turner shook off the Aussie’s submission attempts, and when the two stood, “The Tarantula” ended matters quickly, with two rights hurting Potter before a barrage of shots on the mat brought in referee Peter Hickmott to stop the fight 53 seconds in.

Martinez had a solid first round in his second UFC bout, using some crisp kicks before taking control on the mat. Buren was never in serious trouble, but he did find himself in a hole on the scorecards entering round two.

Buren tried to turn things around in the second, getting Martinez to the mat just before the midway mark, but Martinez was busy enough to keep his foe from taking over, and as the round progressed, he regained the upper hand while the two grappled against the fence.

Buren opened the third with a takedown, and in an ensuing scramble, the Beijing native locked in an armbar, but Martinez smoothly escaped and took his foe’s back. With a little over a minute left, Buren got free, but he wasn’t able to turn the fight around, with Martinez finishing strong with ground strikes on his foe.