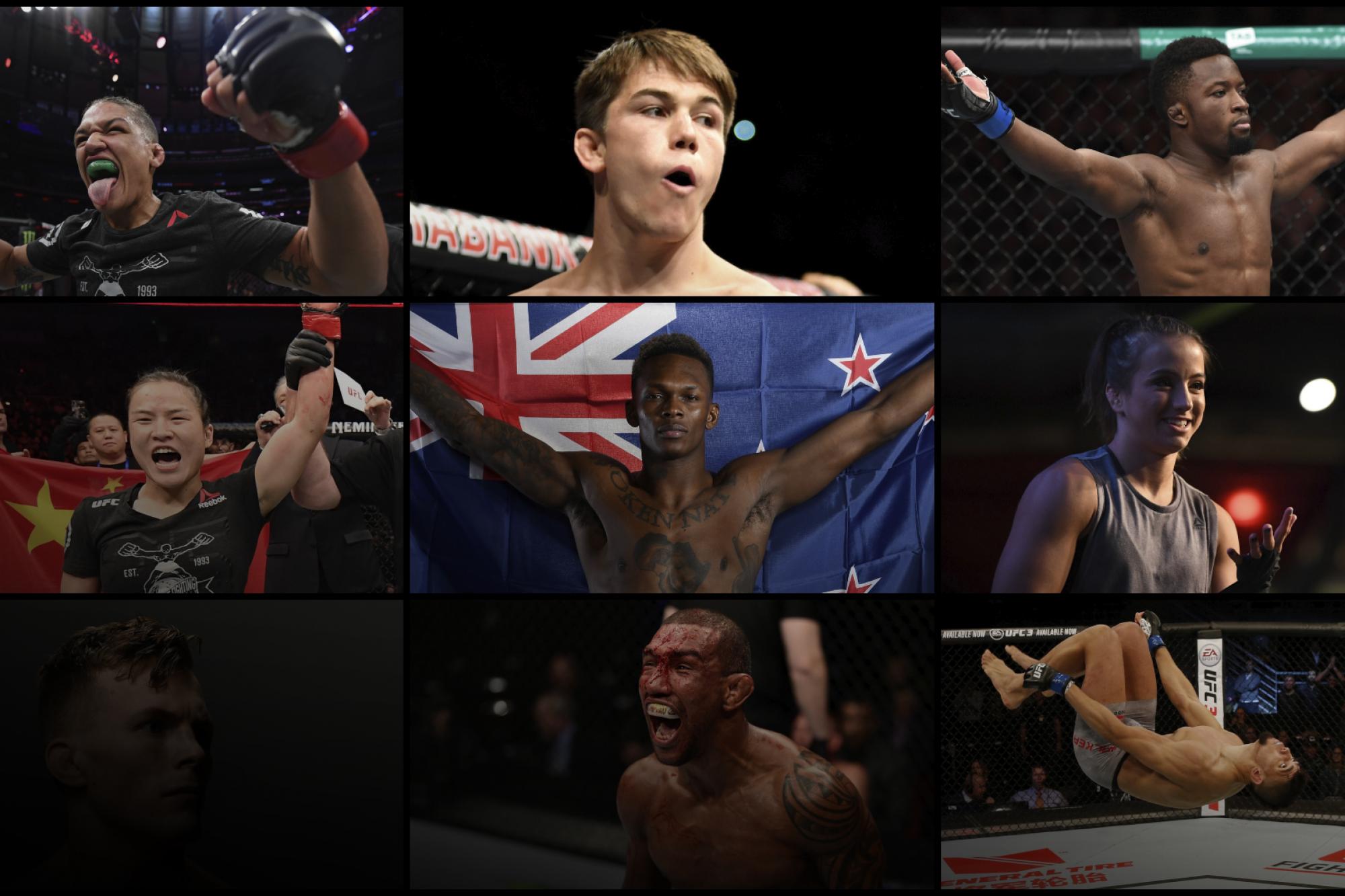 These Rising Stars Made The Most Of Their Octagon Debuts This Year
By Thomas Gerbasi • Dec. 21, 2018

The wide array of talented and charismatic newcomers to the Octagon in 2018 proves that the UFC’s future in in good hands. And from New Zealand to Brazil, Canada to China, it’s an international crew making up this year’s top rookies list.

It’s often difficult to determine who sits in the top spot on lists like this. Nigerian-born New Zealander Israel Adesanya made it easy in 2018. A renowned kickboxer who raced out to an 11-0 pro MMA record, Adesanya arrived in the Octagon with high expectations, but he surpassed them with a quartet of wins over Rob Wilkinson, Marvin Vettori, Brad Tavares and Derek Brunson that took him rapidly from prospect to contender. Add in an exciting style and undeniable charisma, and “The Last Stylebender” is someone we’ll be talking about for a long time. 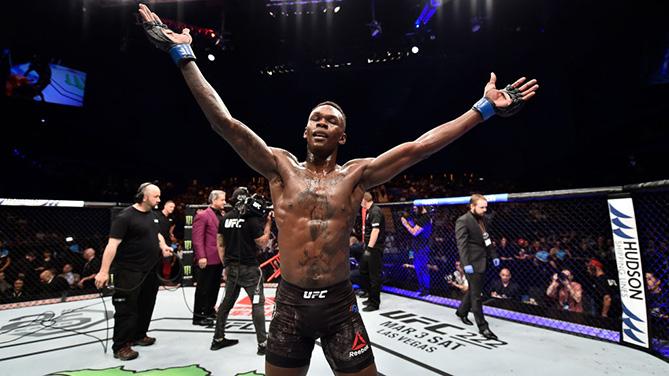 A short notice call to the UFC isn’t always a good thing, as the lack of a full training camp and the nerves that come with fighting in the big show can see someone deliver less than an optimum performance. Don’t tell that to Alexander Hernandez, who turned his late call to face lightweight contender Beneil Dariush into a 42-second knockout. In July, the Texan proved he was no flash in the pan as he defeated Olivier Aubin-Mercier, and in January, he’s got another big assignment in the form of Donald “Cowboy” Cerrone. 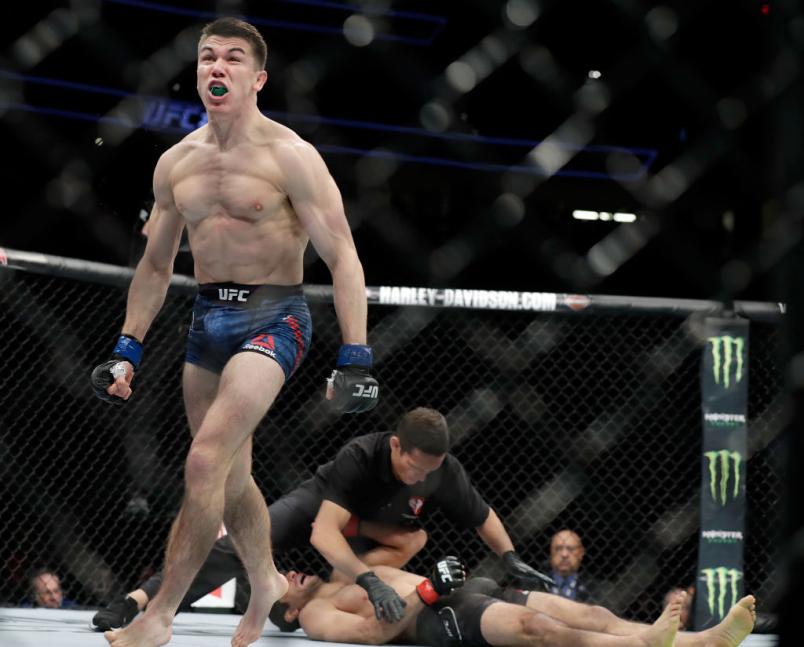 Unlike Hernandez, Mackenzie Dern arrived in the UFC with plenty of advance notice thanks to her stellar jiu-jitsu career, and she kept the momentum rolling with a pair of 2018 wins over Ashley Yoder and Amanda Cooper that introduced her to the UFC fan base and marked her as a fighter to watch in 2019 and beyond. 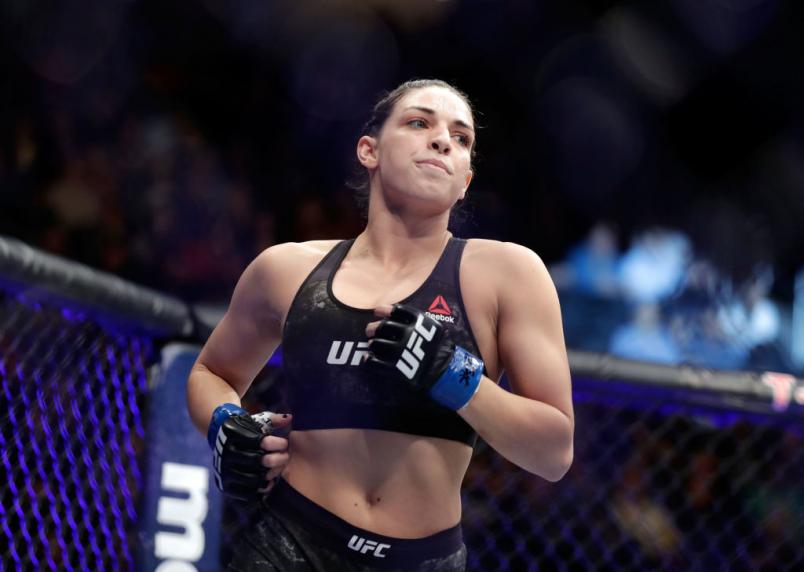 Maycee Barber is on a mission to beat Jon Jones’ record as the youngest champion in UFC history, and “The Future” is off to a rousing start, as she followed up her win on the second season of Dana White’s Tuesday Night Contender Series with a second-round TKO of Hannah Cifers in her UFC debut in November. In the Octagon she can do it all, proving that she can walk the walk as well as talk the talk. 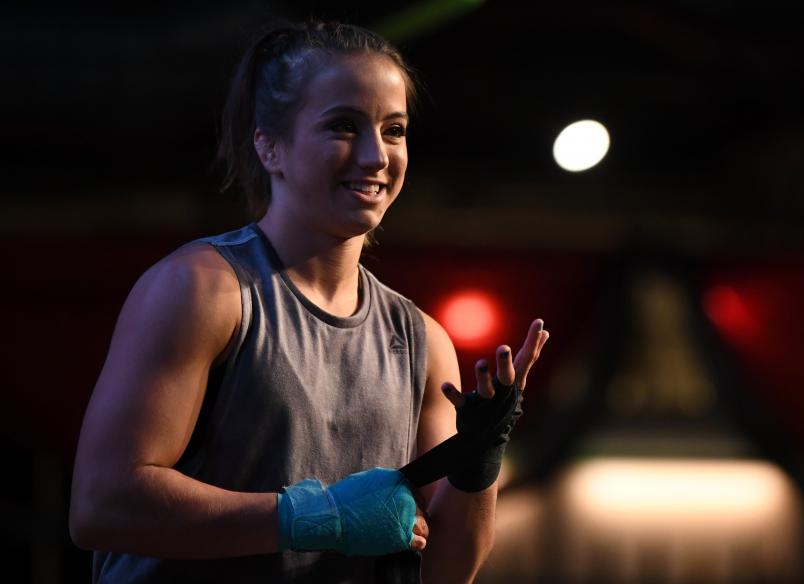 Another Contender Series graduate, Sodiq Yusuff lived up to his “Super” nickname on the summer fight show, winning an exciting three-rounder over Mike Davis, and when he broke in the UFC contract he earned, the result was a stoppage of Suman Mokhtarian in December that sent a message to the featherweight division that he had arrived.

Russia's Petr Yan was expected to do big things when he signed with the UFC and he didnt disappoint in the slightest, showing off world-class striking, a solid ground game and a subtle mean streak in going three for three with two knockouts. In 2019, Yan moves from prospect to contender.

Brad Katona is likely the quietest fighter to ever use the “Superman” moniker, but it all makes sense when you consider that he’s Clark Kent outside the Octagon and the man of steel on fight night. In 2018, the Canadian won season 27 of The Ultimate Fighter at 145 pounds, dropped back down to bantamweight and then decisioned Matthew Lopez in December. This kid is the real deal. 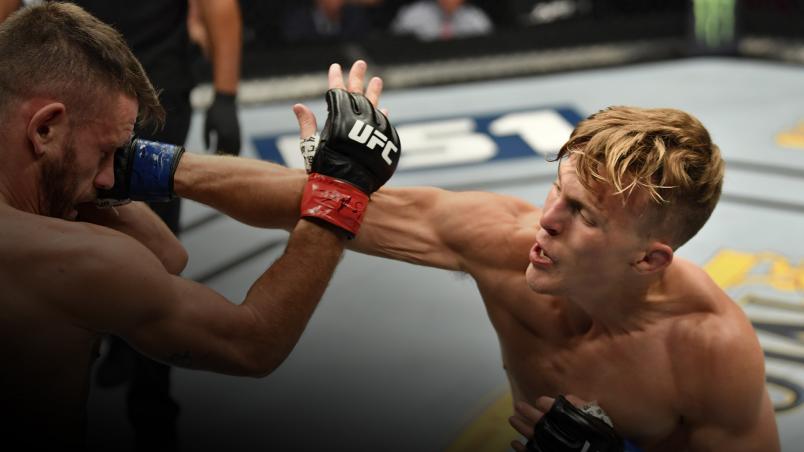 The Chinese MMA scene has been producing several top prospects over the last few years, but the fighter with the greatest potential to land a world title shot first may very well be strawweight Weili Zhang. Already the owner of a stellar pro record, Zhang went two for two in her first two UFC starts in 2018, defeating Danielle Taylor and Jessica Aguilar, and in March, she takes a major leap when she battles perennial contender Tecia Torres in March. 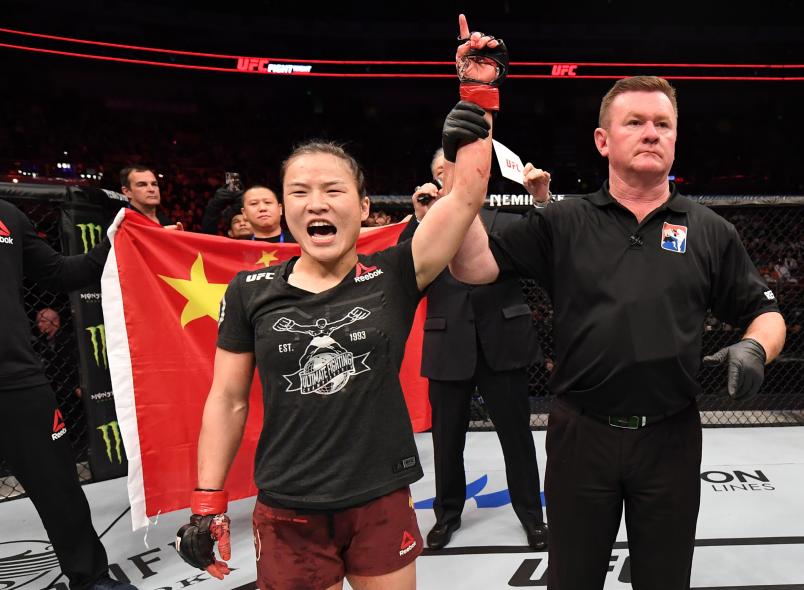 He’s from Brazil, trains in England, and may have the most talked-about name in the sport. That’s enough to get you interested in Johnny Walker, and then you watch him fight and you say, “Yeah, that kids got star potential.” In August, Walker earned a UFC contract with a decision win over Henrique da Silva on the Brazilian edition of the Contender Series, and in his Octagon debut in November, he was calm, cool, collected, fun and decisive (and any other adjective you want to throw in) in knocking out Khalil Rountree Jr. in less than two minutes. 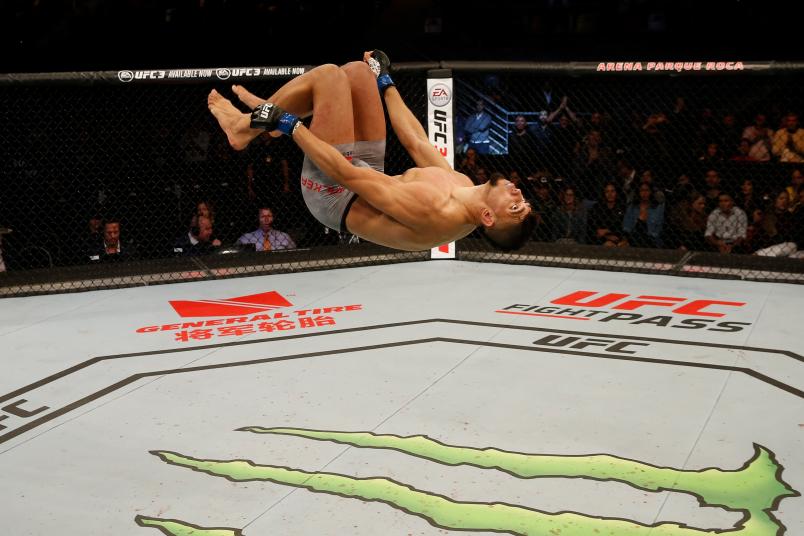 Joining Walker from the MMA rich nation of Brazil is a fighter whose debut was highly anticipated for a while but who didn’t get his chance to compete in the Octagon until July. The wait didn’t seem to deter Raoni Barcelos, who won Fight of the Night honors for his July knockout of Kurt Holobaugh and then ended the year with a submission of Chris Gutierrez in November. 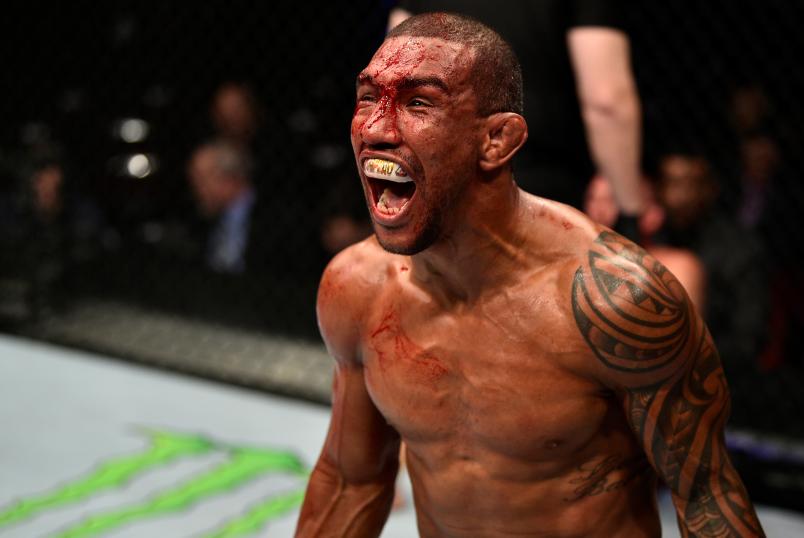 Speaking of waiting, weight cut issues postponed Sijara Eubanks’ UFC debut in December 2017. And while that was disappointing because that debut would have been for the UFC flyweight title, Eubanks got back to work, and in 2018 she continued to show why she’s one of the top talents in the sport as she put together back-to-back wins over veterans Lauren Murphy and Roxanne Modafferi. 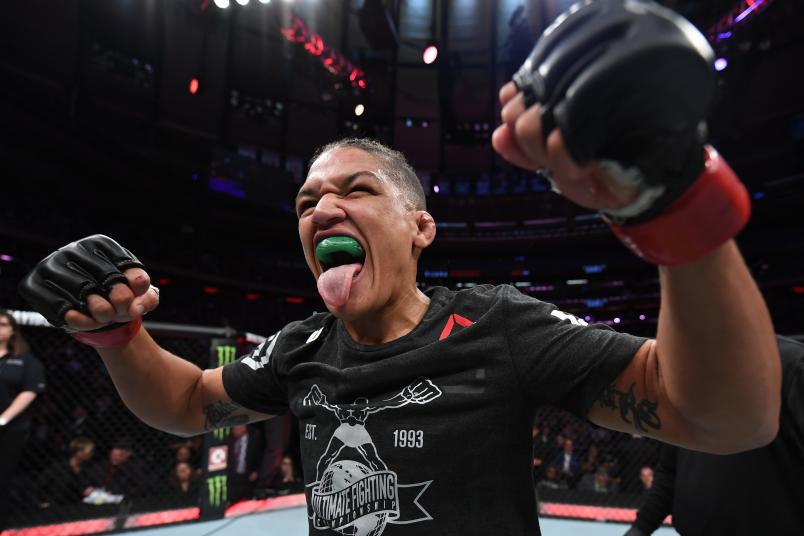