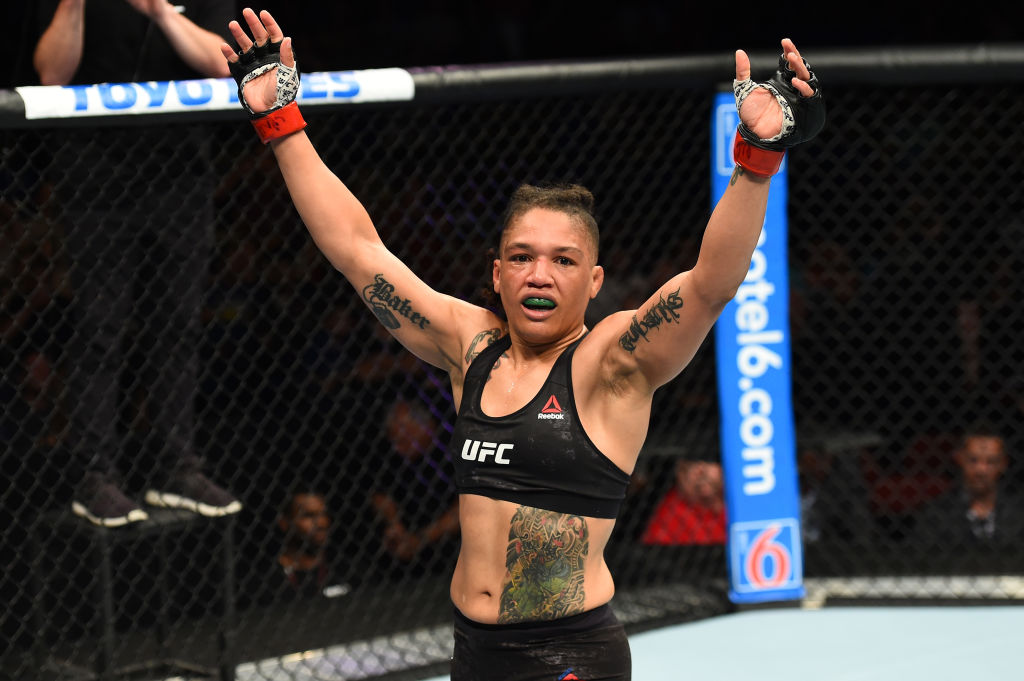 Most of the time, this series shines a spotlight on athletes in the very early stages of their UFC careers — fighters who are either making their promotional debuts or only have one or two Octagon appearances under their belt and are therefore a little ways away from title contention.

Occasionally, however, those two separate circles overlap to create a Venn Diagram version of On the Rise — one where one or more of the competitors are both relatively new to the promotion, but also making waves in their respective division.

This is one of those times.

In addition to featuring a heavyweight talent who is still in the early stages of his UFC career, this week’s edition also features a featherweight who has quietly been climbing the ranks and seems poised to make noise in the 145-pound weight class in 2019 and a female flyweight who could land in the thick of the title conversation with a victory on Saturday night at Madison Square Garden.

Now that I’ve piqued your interest, let’s get to it, shall we?

“SarJ” made some noise on Season 26 of The Ultimate Fighter, storming through three of the top five seeds to advance to the finals opposite Nicco Montano, who had a similar Cinderella run to the inaugural flyweight title fight by beating the second, third and sixth-seeded fighters in the competition.

Despite her impressive run on the show, all people choose to remember about Eubanks is that she was forced out of her title fight with Montano due to issues with her weight cut, opening the door for Roxanne Modafferi, whom she defeated in the semifinals, to replace her in the championship bout.

With the drama of last December way behind her and a victory over Lauren Murphy in June in the books, Eubanks has firmly established herself as a contender in the 125-pound weight class and has a chance to further cement her status in an official bout with Modafferi on Saturday night.

Now representing the “Iron Army,” a win for the 33-year-old Eubanks this weekend would give her a pair of Top 5 conquests in 2018 to go along with the momentum she built on the reality TV competition and put her on the very short list of potential title challengers in the flyweight division heading into next year.

Featherweight is deep with talent and it takes a lot to break into the Top 15, but one fighter who has the potential to do so in the near future is Arce.

The former Ring of Combat standout didn’t earn a UFC contract after earning a second-round stoppage win over Peter Petties on the first season of the Contender Series, but his performance put him on the company’s radar and when a spot opened up at UFC 220, the Team Tiger Schulmann representative answered the call.

After beating fellow newcomer Dan Ige that night in Boston, Arce extended his winning streak to seven with a second-round stoppage win over Daniel Teymur this summer in Utica, New York to establish himself as one to watch in the 145-pound weight class. Saturday night, he looks to complete a perfect rookie season in the Octagon with a victory over Sheymon Moraes, who rebounded from a debut loss to Zabit Magomedsharipov with a hard-earned win over Matt Sayles back in August.

Arce has faced solid competition throughout his career and adding a win over the talented Moraes will bring him one step closer to cracking the Top 15. The Brazilian has only lost to Magomedsharipov and bantamweight contender Marlon Moraes (no relation) and is the type of powerful, seasoned talent capable of halting an upstart’s rise in a hurry.

But Arce has shown sound fundamentals throughout his UFC run and an opportunistic approach that keeps him out of harm’s way yet allows him to secure finishes when he’s got opponents hurt. Patient, polished and poised for big things, Arce is someone to keep tabs on in the stacked featherweight ranks both this weekend and beyond.

When you earn your second win in the Octagon — and ninth straight victory overall — by becoming just the second person to finish a fight by omoplata, you have my attention and deserve recognition as someone to watch in the heavyweight division.

Wieczorek tapped out Arjan Singh Bhullar with the rare shoulder lock in April after earning a unanimous decision win over Anthony Hamilton in his promotional debut. The 26-year-old fighter’s lone loss came all the way back in his second professional appearance in a fight with Top 10 fixture Marcin Tybura. With Bhullar fresh off a win last weekend in Moncton, Wieczorek’s stock climbs a little higher heading into this weekend’s matchup with Marcos Rogerio de Lima at Madison Square Garden and if he can turn back “Pezao” to pick up a third consecutive UFC victory, the surging Polish prospect will clearly establish himself as one of the top emerging talents in the division heading into 2019.

As much as people like to say it’s easier to make headway in the heavyweight rankings than in most divisions, Wieczorek profiles as someone with the potential to make some noise in the division in the next couple years, and a victory this weekend could set him up to follow a comparable path to the one Tai Tuivasa followed this year.

While he’s not getting the same major step up in competition “Bam Bam” received for his third appearance in the Octagon, Wieczorek is jumping into the cage on short notice with a seasoned competitor this weekend, and a good showing will have him in position to make some noise next year.