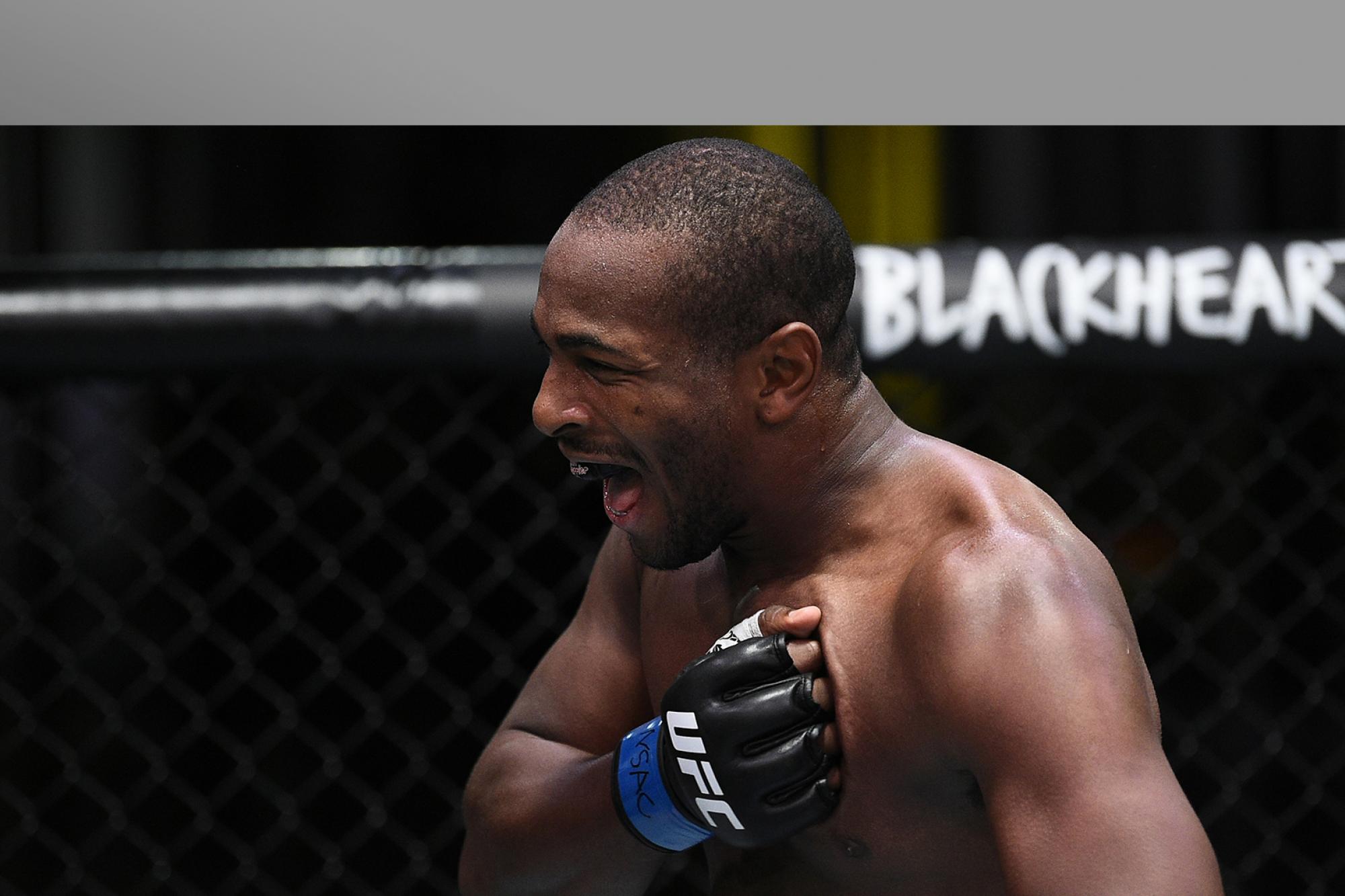 Mike Rodriguez Is Using 2020 As His Springboard

2019 didn't go the way Mike Rodriguez wanted, so he approached 2020 with a refreshed mindset and it's paying dividends.
By Thomas Gerbasi, on Twitter: @TGerbasi • Sep. 9, 2020

Mike Rodriguez is a little busy. He’s back home in Massachusetts after two minutes and 17 seconds of work in Las Vegas on August 22, but there’s training to do, a pre-fight COVID-19 test to take and another flight out west to face Ed Herman this Saturday.

More importantly, he’s got to get his look right for his second fight in a month’s time, so his daughter Rowyn has that covered.

“I gave daddy a haircut,” she said excitedly.

“Before you called me, we were playing hairdresser and she gave me a haircut,” laughed dad, who is in a good place after his first win since December 2018. If that sounds like a long time to get your hand raised, it sounds longer to Rodriguez, who knew precisely what a 1-2, 1 NC UFC record looked like to the world.

So he did something about it, looking flawless in halting Poland’s Marcin Prachnio. When it was over, you could almost hear the sigh of relief. 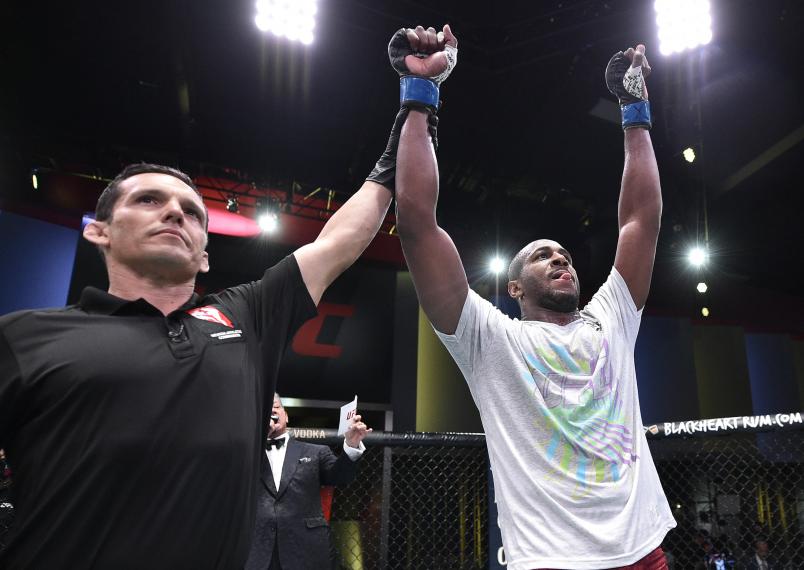 Mike Rodriguez reacts after his TKO victory over Marcin Prachnio of Poland in their light heavyweight fight during the UFC Fight Night event at UFC APEX on August 22, 2020 in Las Vegas, Nevada. (Photo by Chris Unger/Zuffa LLC)

More than the win, though, it was the way the New Englander took care of business, competing not like someone fighting for his job, but fighting with the same confidence that got him to the UFC in the first place. And once the Octagon door shut, he knew what the end result would be.

“Sometimes I have that feeling and I just usually go off that feeling, whether it's landing an elbow, or flying knee, or whatever,” he said. “I always feel like this is gonna be the move to land. I'm gonna execute this, I've been practicing this over and over, it's been landing in practice perfectly and this is the time where it's gonna show, right here.”

More UFC Vegas 10: Bryan Barberena Is Back | Fighters On The Rise | Fight By Fight Preview

“I didn't have any injuries from the last fight, so I was like, 'All right, let's try and get a quick turnaround,'” he said. “I'm trying to buy a house, so I was like, 'Yeah, I'll take some more money.'”

Rodriguez will be seeking a few bucks and maybe a bonus to put towards that house against a veteran in Herman who he is very familiar with, even if their paths haven’t crossed in person.

“I've always been a fan of Ed's,” he said, recalling how he and his friend, Harley, watched the TUF 3 Finale in his living room back in 2006, when Rodriguez was still in high school. That night, he wasn’t cheering for “Short Fuse,” though. 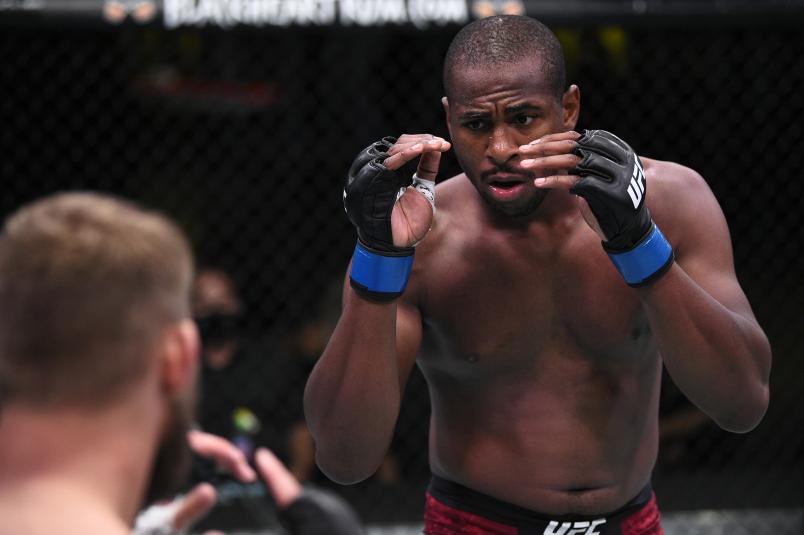 Herman lost a close, but unanimous, decision to Grove that night, earning Rodriguez some bragging rights. And now, 14 years later, he’ll be throwing hands with him, which led to a phone call to Harley.

“Guess who I'm about to fight? Ed Herman, your boy.”

But will Harley still be rooting for Herman this weekend?

“That's what I'm saying,” laughs Rodriguez, who is embracing the opportunity, not looking at it as something strange to be fighting someone he grew up watching.

“It's cool,” he said. “I used to watch (coach) Joe (Lauzon) growing up and I see him every damn day. It's definitely pretty cool.”

That’s how Rodriguez would describe 2020, as well, which isn’t what many would say, but after a rough 2019, he’s sticking to his guns.

“I got no beef with 2020,” he said. “Honestly, I think the COVID stuff was really good for me. The thing is, I was so distracted (in 2019). I was working at a bar, bartending, and it was sort of crazy. I'd be coming in at four o'clock in the morning, get a couple hours of sleep, get to the gym the next day, and I was just in a s**tty place last year. So when COVID hit, at first I was like, 'Oh man,' but I took it in and I'm like, 'You know what, this is good because I needed this pause.’ I stuck with the family and did everything with the family.”

Everything. So now he’s got to get back to that haircut.