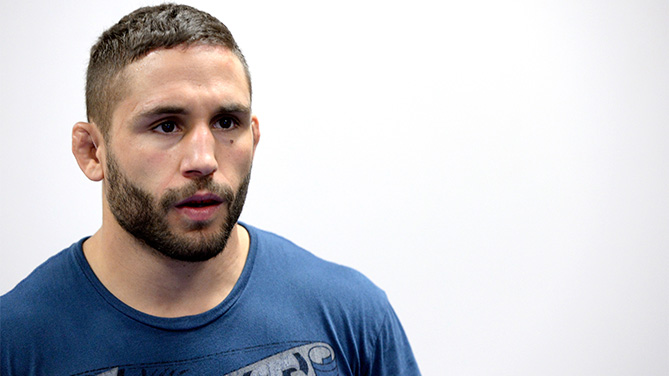 Some may look at a late notice championship fight as a disaster waiting to happen for the one who takes that opportunity. But if anyone is ready to challenge for the interim UFC featherweight title on a little over a week’s notice, it’s Chad Mendes.

Mendes has had two cracks at Jose Aldo’s belt, coming up short both times, but after each defeat, he found a way to elevate his game and sew up the holes he’s needed to in order to be better the next time around.

For the 30-year-old Team Alpha Male standout, the next time is this Saturday night in Las Vegas, and Mendes has every intention of making this third time the charm. 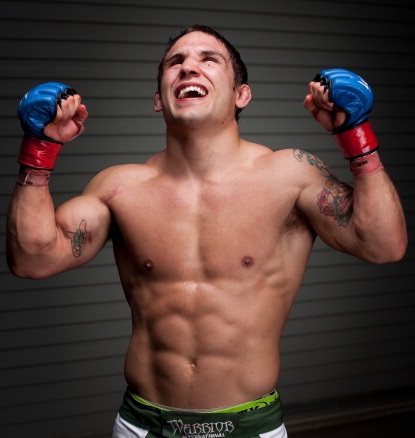 Before Chad Mendes made his 2010 debut in the WEC - the premier promotion for the lighter weight classes before the UFC brought in the featherweights and bantamweights that competed in the blue cage - his teammate and mentor Urijah Faber brought him to a UFC event and introduced him to the media on press row, letting us know that the former All-American wrestler from Cal-Poly was a future champion. Faber’s endorsement carries a lot of weight, so expectations were high for Mendes’ first WEC bout and he delivered, surviving a cut over his eye to decision fellow rising star Erik Koch. The race to the top was on. 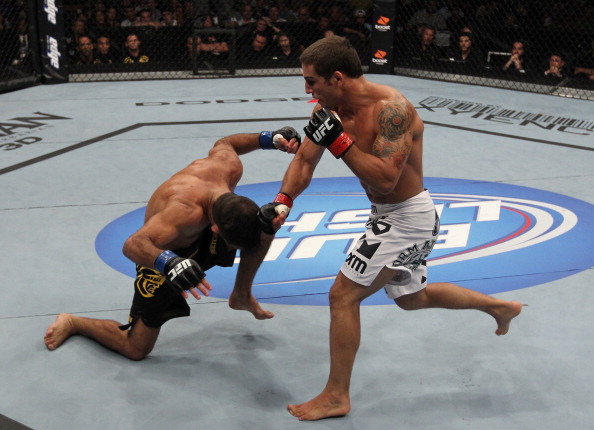 Hanford, California’s Mendes impressed during his time in the WEC, adding victories over Anthony Morrison, Cub Swanson and Javier Vazquez to his ledger following the Koch win. He was hot on the tail of Jose Aldo, and when the two migrated to the UFC along with the rest of the WEC standouts, it was inevitable that the two would meet. In fact, it was rumored that Mendes would get a shot at Aldo after he defeated Michihiro Omigawa in his UFC debut in February of 2011, but that fight went to Kenny Florian. Undeterred, Mendes stepped up to the plate against another Brazilian, Rani Yahya, and while he wasn’t spectacular in victory, he was dominant, shutting out the Jiu-Jitsu ace over three rounds and putting himself next in line for a world championship fight. 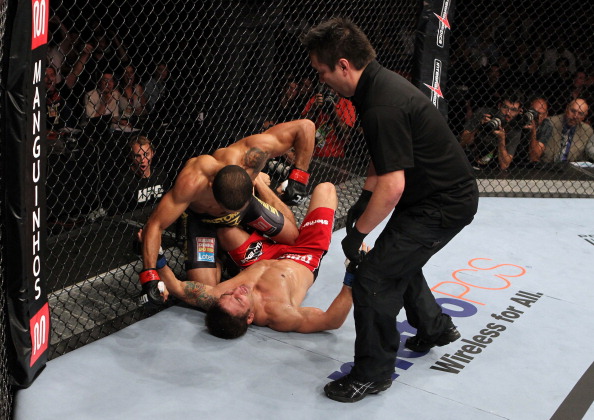 Mendes just wasn’t ready for Jose Aldo in January of 2012. Not at that level of his development and not with just 11 fights. That was the takeaway from the Californian’s first world title fight against the UFC’s first and only featherweight champion. Yes, he was competitive early on against the champion, who was fighting in his home country of Brazil, but Aldo was the better man that night, and when he hurt and dropped Mendes with a knee late in the round, he didn’t let the challenger off the hook.

After the bout, Mendes didn’t sulk, didn’t lock himself in a dark room to brood. Instead, he went back to the gym to figure out what he needed to do to never let that happen again..

“Don't get me wrong, it sucks, and I absolutely hate it, but I also understand that it's a part of any sport,” Mendes said. “You can't win them all, even though you absolutely want to and you work so hard to try to. It's just not gonna happen. So for me, it was basically a learning experience. It was tough for a few hours after the fight and the most difficult part was that I trained so hard and then felt like I didn't even get the chance to use it or even show what I had, but I realized that it happens.” 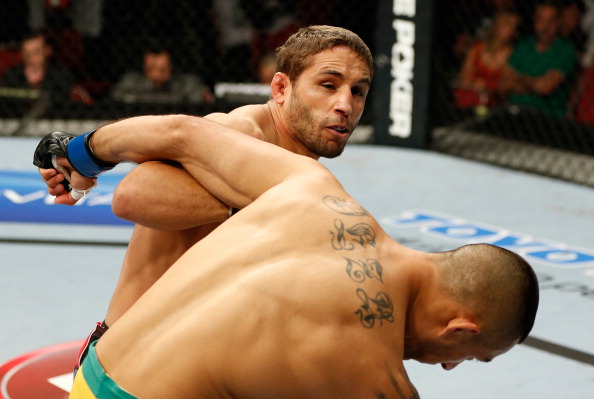 The key to Mendes’ return to the top of the featherweight division after his first loss to Jose Aldo was realizing that he had to have more weapons to throw at his opponents. His wrestling was top-notch and he could use it to control fights, but if an opponent could keep a fight standing, then what? Mendes answered that question in his first fight post-Aldo, halting Cody McKenzie in 31 seconds six months after the loss. It was impressive, but most weren’t convinced that they were seeing a “new” Chad Mendes until he knocked out tough vet Yaotzin Meza in less than two minutes in Australia. It wasn’t just that Mendes was stopping people now, but he had the swagger to go along with it. And when you mix belief with one-punch stopping power, that’s a dangerous combination.

With coach Duane Ludwig leading the way, Mendes picked up another knockout against Darren Elkins in April of 2013 to make it three straight wins, all finishes, since the first Aldo bout. Clay Guida was going to be the litmus test for Mendes’ second run at the belt though, as he was a steel-chinned competitor and contender who had never been knocked out before. At least not until he ran into Mendes, who made a statement that sent shockwaves through the division when he halted “The Carpenter” in the third round. He would add a fifth consecutive win to his ledger against Nik Lentz four months later, and then it was time for Aldo once more. 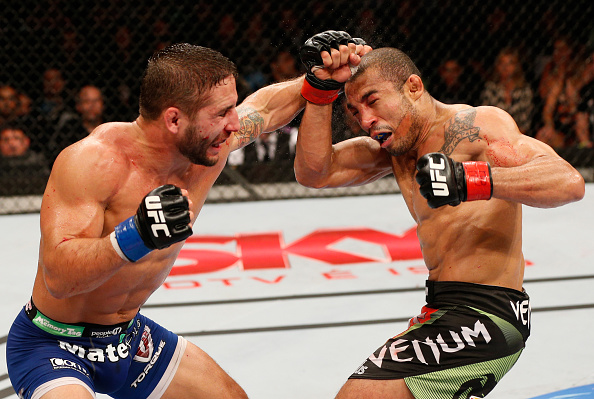 On paper, fight fans can look at the result of this fight and assume Jose Aldo just has Chad Mendes’ number, but in reality, this was a complete 180 degree turn from their first bout, and a clear sign that Mendes wasn’t the same fighter he was in 2012. The second time around, Aldo and Mendes had built a bit of a bad blood rivalry, and the intensity when they were within striking distance of each other was evident. This carried into their five-round war, which was clearly the greatest featherweight title fight in UFC history. Back-and-forth throughout, Mendes showed the elevation of his game, and although Aldo gutted out the decision victory to make it 2-0 against “Money,” Mendes was getting closer to beating his rival, and it’s hard to think of anyone who would complain about seeing a third meeting between the two.

Some fighters are never the same after losing a title fight. To lose two can cripple the psyche of a competitive athlete, but Chad Mendes is cut from a different cloth than most. He went through the pain of coming in second in the 2008 NCAA Championships, as well as a title fight loss in 2012 to Jose Aldo. But would the second championship defeat to the Brazilian take him out of serious contention? His bout against Ricardo Lamas would answer a lot of questions, but it didn’t take long for those answers to come through, as Mendes needed less than three minutes to get back in the win column and back in line for a title shot. Did he expect it to come as soon as July 11? Probably not, but when Daniel Cormier got his late-notice call to fight for the vacant light heavyweight title in May, he answered and won the belt. This Saturday, Mendes gets that same chance against McGregor, and he expects to hear his name and the words “and new” in Las Vegas.

To kick off Hispanic Heritage Month, the Fighter Timeline series features Cain Velasquez and five of the biggest fights of his UFC career.

In honor of Khamzat Chimaev's 10 day turnaround for his fight against Gerald Meerschaert at UFC Vegas, we look back at the Top 5 fastest turnarounds in UFC history.