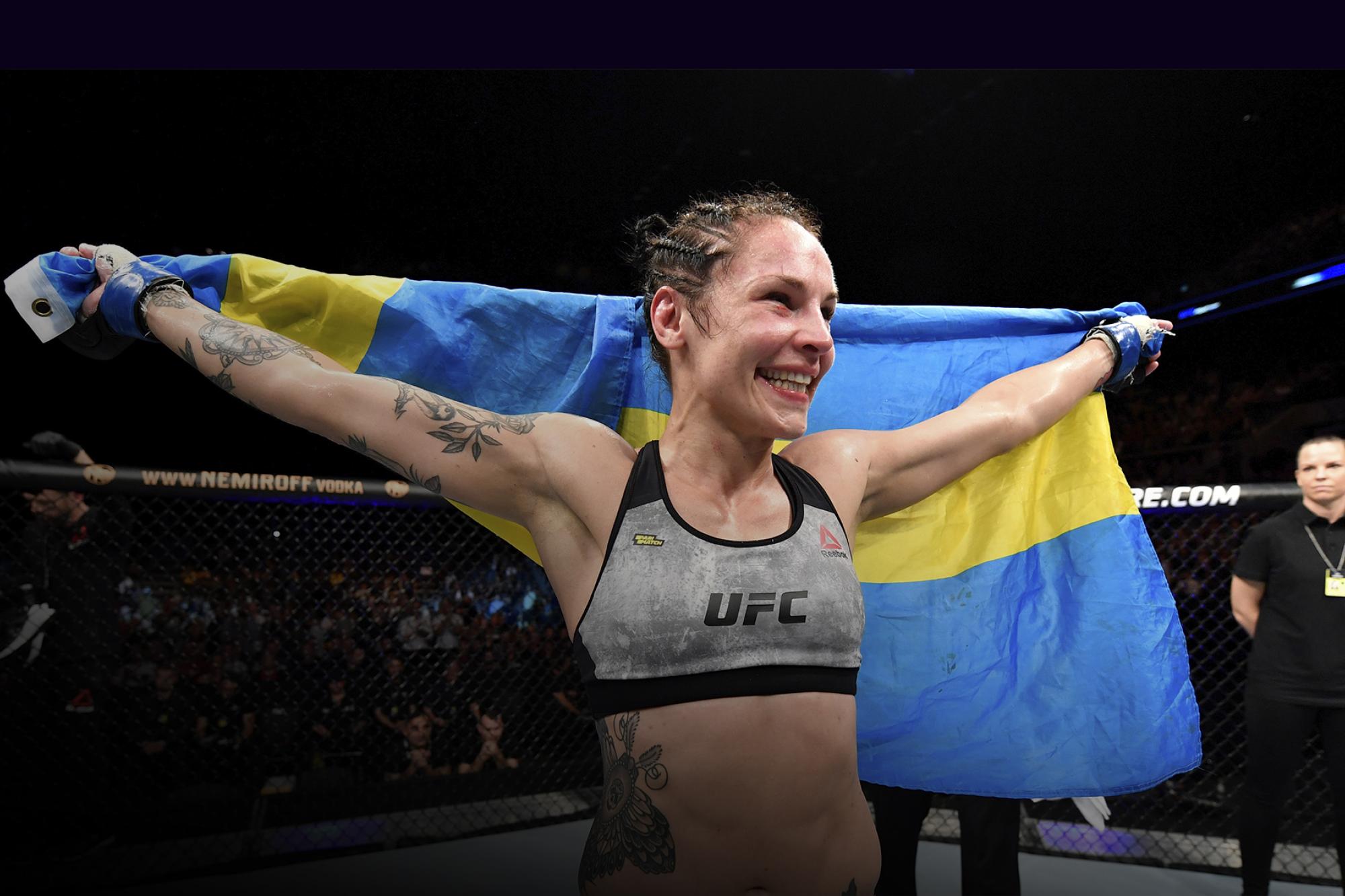 “My next chapter is to win this fight and then I will have a couple of months off and then everything I will do will be for this project to have even more girls there."
By Thomas Gerbasi, on Twitter: @TGerbasi • Jan. 23, 2020

When Lina Lansberg steps into the Octagon this Saturday night to face Sara McMann in Raleigh, North Carolina, it will be a long way from her home in Malmo, Sweden, but the “Elbow Queen” need not worry, as the members of her L-Bow Academy are going to be watching.

“Yeah, they will,” Lansberg said. “I will remind them.”

That probably won’t be necessary, as the bantamweight contender has rapidly become a hero to the more than 20 girls she teaches each week, giving them something more than lessons in martial arts technique. She’s teaching them that they don’t have to follow a conventional path or do what “tradition” has taught them. They can express themselves the way they want to as equals.

That wasn’t always the case, as kids’ classes at the Redline Training Center were popular, but mainly filled with boys and only a few girls.

“It was kind of hard to see, because I saw girls coming in there, but it wasn’t comfortable for them to train with the boys only,” Lansberg explains. “And you heard the boys say, ‘Oh, she can’t do it, she’s weak.’ At the same time, I realized that I could show them something more as a woman. So we started up this project for girls, and I realized that if I had the possibility to do something like this as a girl, my life wouldn’t have been the same. It would have been so much better. Now with the project that I started, they can learn something that isn’t about being cute, being polite, being nice all the time.”

Not surprisingly, the L-Bow Academy took off fast, and the popularity of the class has justified the time Lansberg is devoting to it. And while the classes are obviously becoming an important part of these students’ lives, their teacher is also reaping the benefits of giving back to the younger generation.

“I had some troubles growing up,” Lansberg explains. “My life wasn’t what it is supposed to be for little girls. So to be able to give back to them, to create something else and something more for them, that definitely means so much to me.”

And she’s already seeing the difference.

“The first class they’re in, when they’re small, they don’t say too much,” Lansberg said. “Then the second time, they’re screaming, ‘I’m the strongest.’ (Laughs) That definitely means a lot to me to be able to use what I have done for 15, almost 20 years, and give something back and to create something more than just to do this whole thing for myself. In one way, fighting is for me, it’s not helping people too much; but now I have the possibility to do that as well. We had a big camp recently, and to see those girls and to hear their parents telling me that they’re talking about me all the time, it’s definitely important.” 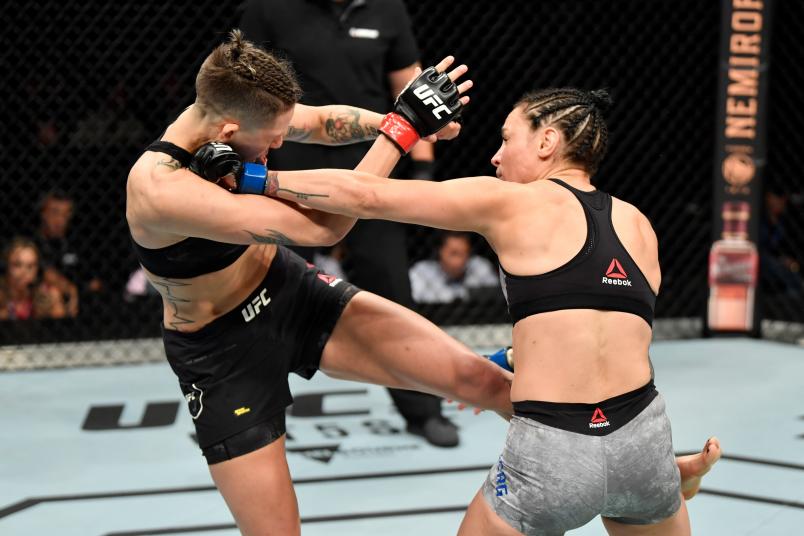 With the important work that Lansberg is doing in the gym, it’s easy to forget that she’s been writing one of the best MMA stories in recent memory. A Muay Thai standout who transitioned to pro MMA in 2012, Lansberg parlayed a 6-1 start to her career into a call from the UFC to face Cris Cyborg in a 140-pound catchweight bout in 2016. The Swede lost that bout, and by the end of 2018, her Octagon record stood at just 2-3.

Then 2019 rolled around, and in front of supportive fans in Sweden and Denmark, Lansberg finally put it all together in defeating former Invicta FC champion Tonya Evinger and previously unbeaten rising star Macy Chiasson. The Elbow Queen had arrived.

“In some way, I enjoy the whole thing more now for some reason,” she said. “I went from being a world champion in Thai boxing and then started with MMA and was feeling s**t at everything. Some years ago, it felt better and felt easier. I was more happy training, and I guess that’s why. And it has come back to me. I won the last two fights and everything was great.” 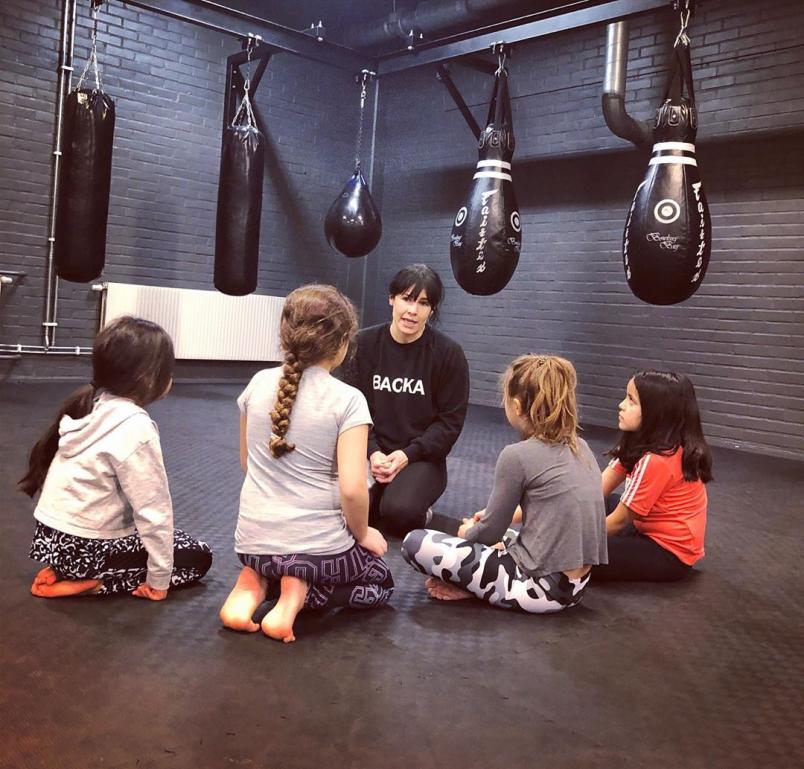 MORE FROM UFC RALEIGH: RDATaking The Hard Route | Fight by Fight Preview | Fighters On The Rise | Hill Reaching Her Peak

Now ranked No. 11 at 135 pounds, Lansberg can move into the top ten if she defeats Olympic silver medalist McMann, making this the most important fight of her MMA career. But after the emotional victories of 2019, can she reach those heights again in her first fight of 2020?

“We’ll see about that,” she laughs. “Of course, I do think that the crowd had something to do with it (against Evinger and Chiasson), but still I feel more confident and I feel calmer in every way. The crowd will probably be on her side this time, but I feel quite confident anyway. And I know that she’s a really tough opponent and I am looking forward to this fight so much, so it feels like I will bring everything that I can bring. It (the crowd) doesn’t matter, really. Hopefully.”

Lansberg laughs again, happy with where she is in her career and in her life as a teacher. That’s some story. So what’s the next chapter look like?

“My next chapter is to win this fight and then I will have a couple of months off and then everything I will do will be for this project to have even more girls there,” she said. “And my main goal, I said it like two years ago, is to make this city a city where everybody says, ‘That’s the city where all girls train martial arts.’”