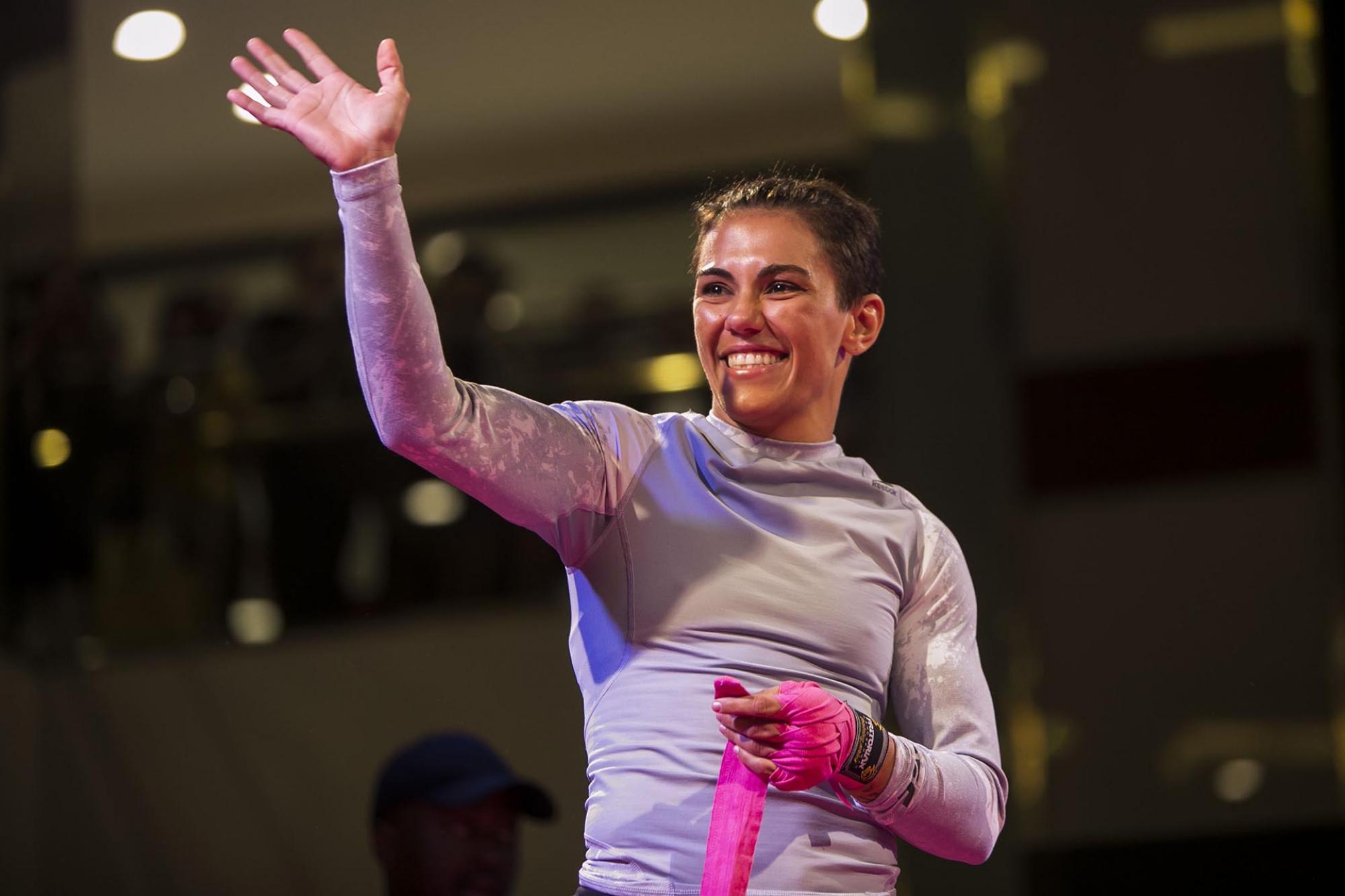 Jessica Andrade By The Numbers

A Dive Into The Stats That Keep "Bate Estaca" Among The Strawweight Elite
By Steve Latrell, on Twitter: @TheUFSteve • Jul. 8, 2020

In one of the most thrilling finishes in recent UFC championship history, Jessica Andrade weathered a deft striking clinic from then-champion Rose Namajunas before picking her up and slamming her to the canvas. The impact knocked Namajunas out, and Andrade captured strawweight gold at last May’s UFC 237 event. The unlikely ending was a thrilling display of strength and heart…one Andrade knows she can’t rely on again when the two meet again Saturday at UFC 251.

“What I learned for this next fight is that I have to stay out of her range,” she says candidly of Namajunas’ early success in their first meeting. “I can’t just stand there still. I have to use the fence more, use my strength and make her arms tired. I’ve worked a lot on how to avoid the shots in order not to get beaten up. It might be a completely different fight from the first one.”

“Being able to finish that fight with that move was something unprecedented. That might not happen again any time soon in my career. But I know the technique,” she smiles. “I know how to do that.”

There are a lot of techniques “Bate Estaca” knows how to do, as the numbers below will indicate. She’s perennially amongst the elite in her division, and if she wants the chance to reclaim the strap that was once hers, she’ll need to become the first fighter to defeat “Thug Rose” twice. 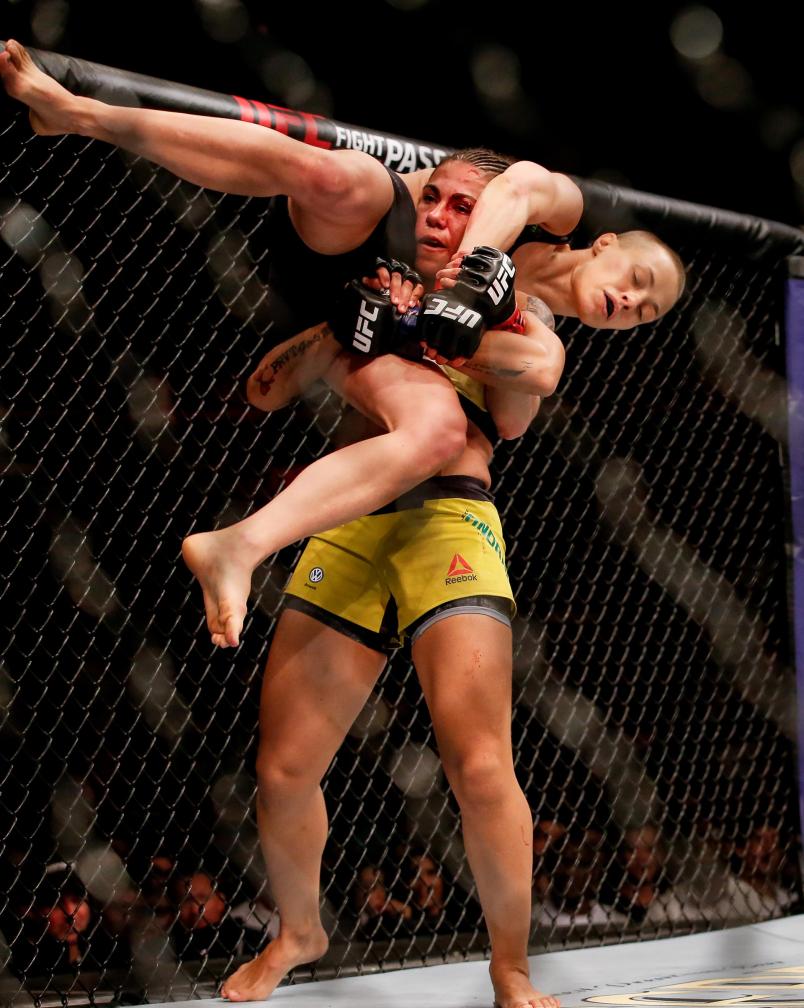 Between her initial run in the women’s bantamweight division to capturing the strawweight gold in 2019, Andrade’s 11 wins are the second most for any female fighter under the UFC banner. The first? Amanda Nunes.

Four strawweights are tied with Andrade for second-most wins in the division’s history with seven. Of the four, Andrade has defeated the three she has faced: Claudia Gadelha, Angela Hill and Tecia Torres.  It’s also notable that since her inaugural tilt in the strawweight division, Andrade’s only two losses were both in title fights (2017 vs Joanna Jędrzejczyk, 2019 vs Zhang Weili).

Order UFC 251 Here For Any Device

“I think I found my home in this weight class,” she says. “I do the weight cut really well, and on fight night I feel stronger than my opponents. I feel fast, so I think that’s the big difference.”

If Saturday’s rematch with Rose Namajunas ends with a KO or a submission for either fighter, the winner will sit alone atop the statistical category of Most Strawweight Finishes. The pair are currently tied for first with four each.

It’s not really talking out of school to call Andrade the only bonafide knockout artist amongst the strawweights. Her three devastating KO/TKO victories against Jessica Penne, Karolina Kowalkiewicz, and Namajunas are enough for first place in the division, and her fighting style suggests there could be plenty more to come.

It’s little secret that Andrade’s fists are her most reliably lethal weapon. She’s the only strawweight to average seven or more strikes per minute. Her 206 significant strikes against Rosi Sexton at UFC 199 are the sixth most in any UFC fight. That performance famously prompted UFC President Dana White to opine that the fight should have been stopped before it reached the judge’s scorecards.

The same brute strength that makes Andrade’s fists so feared also allows her to be nearly as formidable in the takedown department. Undeterred that at 5 ft 1 1⁄2 inches she measures shorter than nearly every opponent, Andrade’s 58.3% takedown accuracy rate ranks eighth among all active UFC fighters, male or female. Her 22 takedowns in the strawweight division alone are bested only by former opponent Claudia Gadelha, who was unable to land even a single takedown against Andrade when the two met in 2017. Andrade, however, landed four in brutal fashion.

“I was very surprised with her strength,” Gadelha would say later of the encounter. “Jessica is very, very strong. I compare her to a 125-pound guy when it comes to strength and power. I never felt that before.”

If you are one of the lucky few able to score a takedown on Andrade, don’t expect to be on the ground very long. In nine appearances at strawweight, Andrade has spent a mere 52 combined seconds of those fights on her back. Her 0.93% Bottom Position Percentage leads the division ahead of grappling luminaries like Tatiana Suarez.