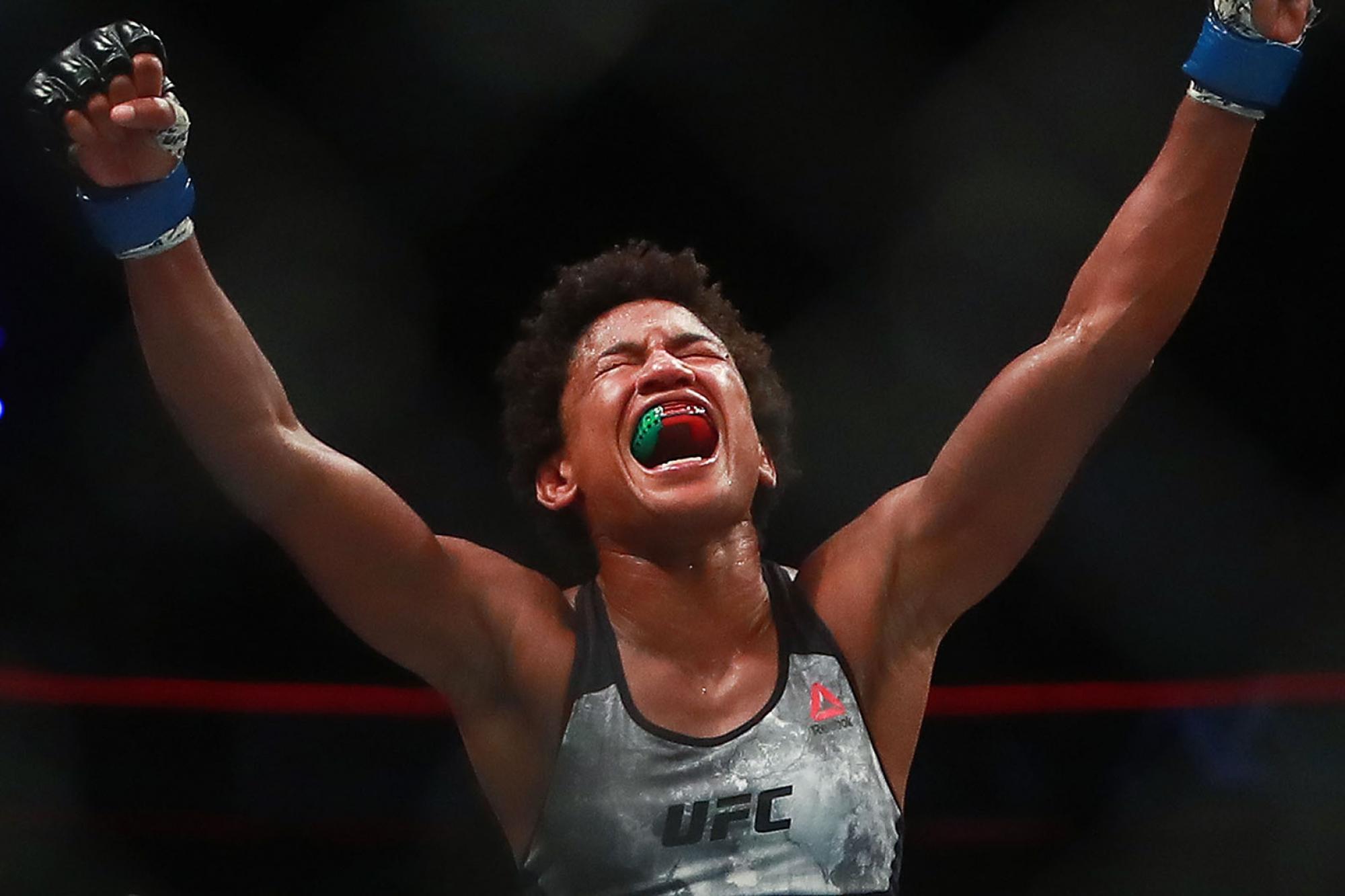 There weren’t many souls in the universe who thought Angela Hill lost her last fight against Claudia Gadelha last May. Unluckily for her, however, two of the people who did happened to be judges.

“It was really hard at the time,” she admits. Coming up on the wrong side of that split decision halted an impressive three-fight win streak. But it didn’t halt the momentum of one of the UFC’s most prolific fighters.

“Even by the end of the night, after I had a couple beers, I’m just like, ‘I have to be proud of what I accomplished. I have to be proud of my performance. And even though those judges didn’t think that I won, everyone else did,’” she recalls. “And it just proved to me how good I am as a fighter. It wasn’t a fluke that I did better in the last two rounds than she did. It was a display of skill that I was able to defend her takedowns, to turn her when she tried to go for them again in the second and third rounds, and I just gained a lot of confidence in myself performing like that against such a highly ranked opponent.

“Taking the confidence from how you feel after beating a good opponent, but also taking that hunger that you feel when you lose a close decision, it’s been a good combination to stay motivated in the gym.”

She’ll bring that extra motivation to the Octagon Saturday, this time against another highly ranked opponent in Michelle Waterson. The pairing feels like a long time in the making.

“I definitely thought we’d fight sooner,” she agrees. “I feel like she’s had a lot of easier matchups than me. I always felt we would be a competitive matchup, and now more than ever I feel like the win is definitely going to happen. My skill set is beyond hers at this point. I feel like I’ve evolved faster. I feel like all the hard fights I’ve been in has prepared me for a fighter of her caliber. So I’m definitely excited to finally prove myself. It’s a fight that I’ve always looked at, but I feel most prepared for it now more than ever.

“I haven’t really let off the gas since my last fight,” she continues. “I think a lot of fighters, especially in the pandemic, it’s easy to take a long break and wait until you get the call to get back into training camp. But after that I was just determined to find ways to get closer to finishing my opponents, find ways to get up faster off of my back, to defend the takedown that got me down in the first place. It really gave me a lot to focus on and fed my hunger to just start finishing people.”

Finishing Waterson is easier said than done. Only Rose Namajunas has done it during her UFC tenure, a submission back in 2017. Hill knows this and has prepared accordingly.

“In the gym I had to stop holding back. I had to start being more aggressive and pushing my cardio to the point where I usually would pull back a bit and let myself reset, catch my breath. I can do a lot when I’m tired. I’m not just limp-armed and limp-wristed and can’t defend takedowns or punches. I can empty my gas tank and still be light on my feet, still be able to recharge and go again a few times in a round. So I was just practicing doing that; really pushing the limits of how uncomfortable I’ll allow myself to be when it comes to getting tired before I hit my resets, and I think that’s probably my key to getting more finishes. I already throw more volume than most of the people I fight. I feel like I have to throw twice as much just to prove to people that I’m winning the rounds. If I can do that and hurt them, as well, I feel like that’s going to be a really good way just to make every round dominant. My focus is to go for 10-8 rounds, not just 10-9 rounds, try to make it one-sided and the more I do that, the more likely I still get the nod if it does go to a decision.”

That focus on endurance should serve her well in a bout that now finds itself in the main event slot. When the previously scheduled bout between Glover Teixeira and Thiago Santos was postponed, the strawweight showdown was a no-brainer to take its place.

“It was the easiest decision I had to make,” Hill says of getting the call to go five rounds instead of three.  “I definitely feel like if I had two more rounds in my last fight, I would have dominated or at least made it obvious that I was the fresher fighter. I always feel like my cardio is ready for five rounds. I did it twice in Invicta. And I felt especially in my first title fight that those two extra rounds made a difference. I was able to keep that pace going, keep that dominance going…I really had my opponent’s rhythm figured out at that point. So it gives me a little less anxiety about the first round. I know whatever happens the first round, I’ll be able to make up for it in the next. It gives me a lot more time to get comfortable in there and figure out my game plan.”

When “Overkill” makes the walk on fight night, she’ll tie Brian Kelleher and a fighter she defeated, Hannah Cifers, for the most 2020 appearances inside the Octagon with four. It sounds like a ton for less than nine months but fighting at this clip is one of Hill’s proudest trademarks. Touching gloves with Waterson on Saturday will mark her 16th UFC bout, more than any other fighter in her division.

“I’m usually ready to go again the next week,” she laughs. “Before the end of the last fight camp, I was like ‘I think I’ll take a break.’ And as soon as I didn’t get my hand raised, I was like ‘I’m going back in the gym! I’ve got to fight again!’ I would love to get a dominant win over Michelle, call out the champion and that gets lined up. But if not, I’m willing to fight whoever, whenever. It’s no different. Just because I’ve had a good run doesn’t mean I’m going to protect myself from any strong newcomers in the game. If they need me…I heard Claudia got injured [laughs]!”