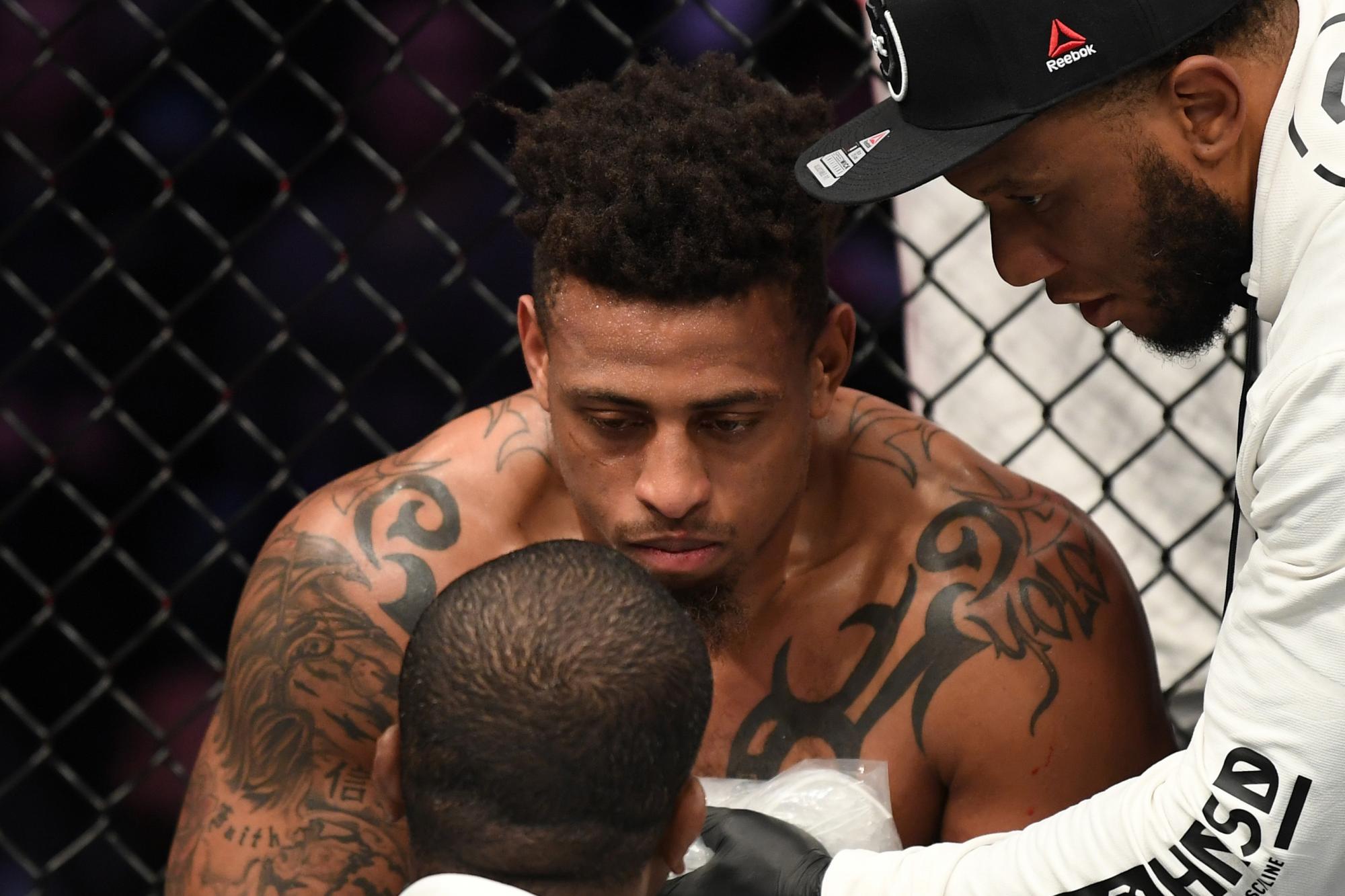 "The only intelligent move here is to learn and constantly keep coming at it humbly, professionally and address all the issues. That’s a formula for success.”
By E. Spencer Kyte • Apr. 25, 2019

As chaos and uncertainty swirled around him, Greg Hardy sat against one of the corner posts inside the Octagon. His mouthpiece sat on the canvas between his legs. The look on his face was one of complete bewilderment.

“What the hell just happened?” is what Hardy said was running through his mind when our conversation came around to one of the more memorable images from his UFC debut.

The former NFL defensive lineman was a little more than three years removed from life in the league, his past was well-documented, and his appearances on Season 2 of Dana White’s Tuesday Night Contender Series the previous summer drew criticism that only ramped up when he was officially signed by the promotion and put in the co-main event in January.

Hardy struggled during the opening round of his bout with Allan Crowder, and when the bout went into the second round with Crowder appearing to be gaining control, many were stunned.

So when the newcomer blasted Crowder with an illegal knee midway through the second round, ultimately bringing the fight to an end and saddling Hardy with a disqualification loss, few recognized it as an unfortunate, but not infrequent, mistake that happens from time-to-time in the heat of battle. 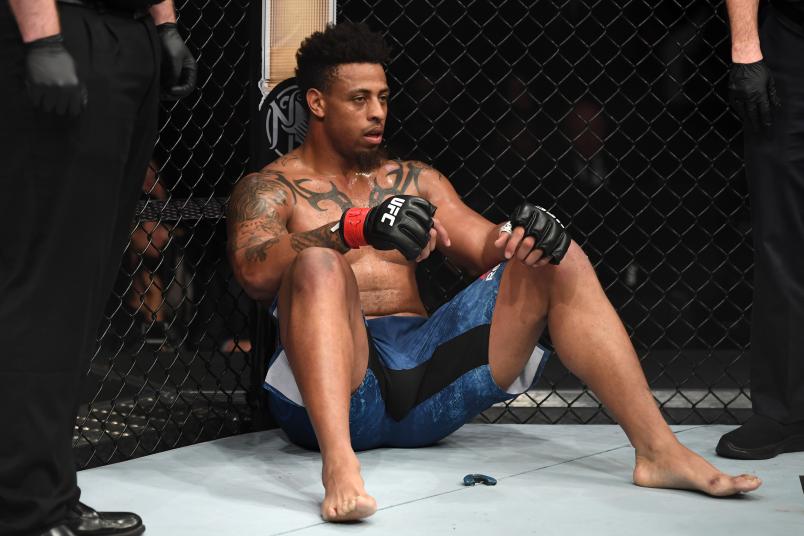 NEW YORK, NY - JANUARY 19: Greg Hardy sits in his corner after being disqualified for landing an illegal knee in his heavyweight bout against Allen Crowder during the UFC Fight Night event at the Barclays Center on January 19, 2019 in the Brooklyn borough

Six weeks after Hardy leveled Crowder with a knee while he was down in the second round of his fourth professional fight, light heavyweight champion Jon Jones did the same to challenger Anthony Smith in the fourth round of their main event title clash at UFC 235.

“For a regular person, it’s pretty crucial,” began Hardy, reflecting on the benefits of experiencing everything that came with his UFC debut in January. “But someone like me, it’s bigger than I think anybody is giving it credit or could ever imagine.

“I’m a man that is going to have to come up against this for probably my next 10 fights. I’m in waters that no other man could survive in. It’s not one of those roads that are going to be the road most traveled.

“Every single fight is big because I can test myself, figure out what went wrong, what’s next and how to become more of the complete assassin I want to become.”

Bold words, but he may have the tools to back them up on fight night.

Hardy is a six-foot-five heavyweight who ran a 4.79 40-yard dash coming out of college. He was voted second-team All Pro in 2013 after registering 15 sacks for the Carolina Panthers.

In his first six trips into the cage — three as an amateur and three more as a professional — Hardy registered six victories, all by knockout, with his longest appearance lasting just 96 seconds.

If he were anyone other than “former NFL defensive lineman Greg Hardy,” he would be heralded as a next-level prospect with one-of-a-kind raw tools for the heavyweight division.

But he’s not and that is why this is a situation that doesn’t have an easy answer or simple solution that will appease everyone involved.

And although he often speaks highly of himself in terms of his potential and athletic gifts, Hardy has approached his current career pursuit and the fallout of his first trip into the Octagon with humility and a genuine desire to improve.

He’s kept a relatively low profile and will be the first to tell you that he’s been embarrassed on many occasions while trying to educate himself and expand his skills inside the American Top Team facility where he has spent the last two years training.

“From my position, you have to approach it humbly, all while knowing this is one of the hardest things and you are one of the only people who can do it,” he said of competing at the highest level. “You’ve got to address it with a bottom of the barrel attitude.

“You’ve got to go in knowing you’re not going to quit. I can’t be broken, so the only intelligent move here is to learn and constantly keep coming at it humbly, professionally and address all the issues. That’s a formula for success.”

Figuring out how to balance his unwavering self-belief with the fact that he’s still exceptionally raw compared to the vast majority of his contemporaries has been a constant struggle for Hardy, but one that he’s happy to face.

“It has been a tedious, repeated process, just over and over again,” said the 30-year-old UFC sophomore, who takes on Dmitry Smoliakov in the co-main event of this weekend’s fight card at the BB&T Center in Florida. “You’ve got to constantly come back and check yourself and when you get out of line a little bit, you have to be the one to say, ‘You’re out of line. Bring it back down and figure it out.’

“That’s my journey and I’ve accepted it,” he added. “I’ve come at it with open arms and once you get used to that model, it becomes habit and that has been my life for the last two years.”

He’s also thought back to his days as an NFL rookie to help him deal with a new athletic career that currently feels like it’s moving at the speed of light.

“When I think about it, I flash back to my rookie year as a football player and I had that same feeling,” said Hardy. “You’re in the locker room, you don’t know what happened; three hours went by in what felt like 30 minutes. But I remember what I did — I re-assessed. I humbled myself.

Now, on the eve of his second UFC appearance, he’s once again ready to step into the fray and square off with the opponent that awaits him inside the cage and the even bigger army lined up against him in the public.

His debut went about as poorly as a maiden voyage into the Octagon could go short of getting knocked out in record time, yet he’s quick to characterize it as an “interesting and enjoyable event, all the way around” and eager to test himself again this weekend.

Hardy knows that his entire career is going to be spent under the microscope and he also knows that he’s exceptionally green and is destined to make mistakes, just like he did against Crowder in January.

He knows all of this and he’s ready to face it because he believes he’s a different class of athlete and capable of accomplishing great things inside the Octagon in the future.

“Watching (Israel) Adesanya come up recently, watching Jon Jones, Rashad Evans — this is what they did — they all made crucial corrections,” said Hardy. “They went into these fights, made mistakes and they came back so much better.

“They didn’t all come back with losses, but they addressed the problems, fixed the problems and elevated quickly and I want to follow that path.