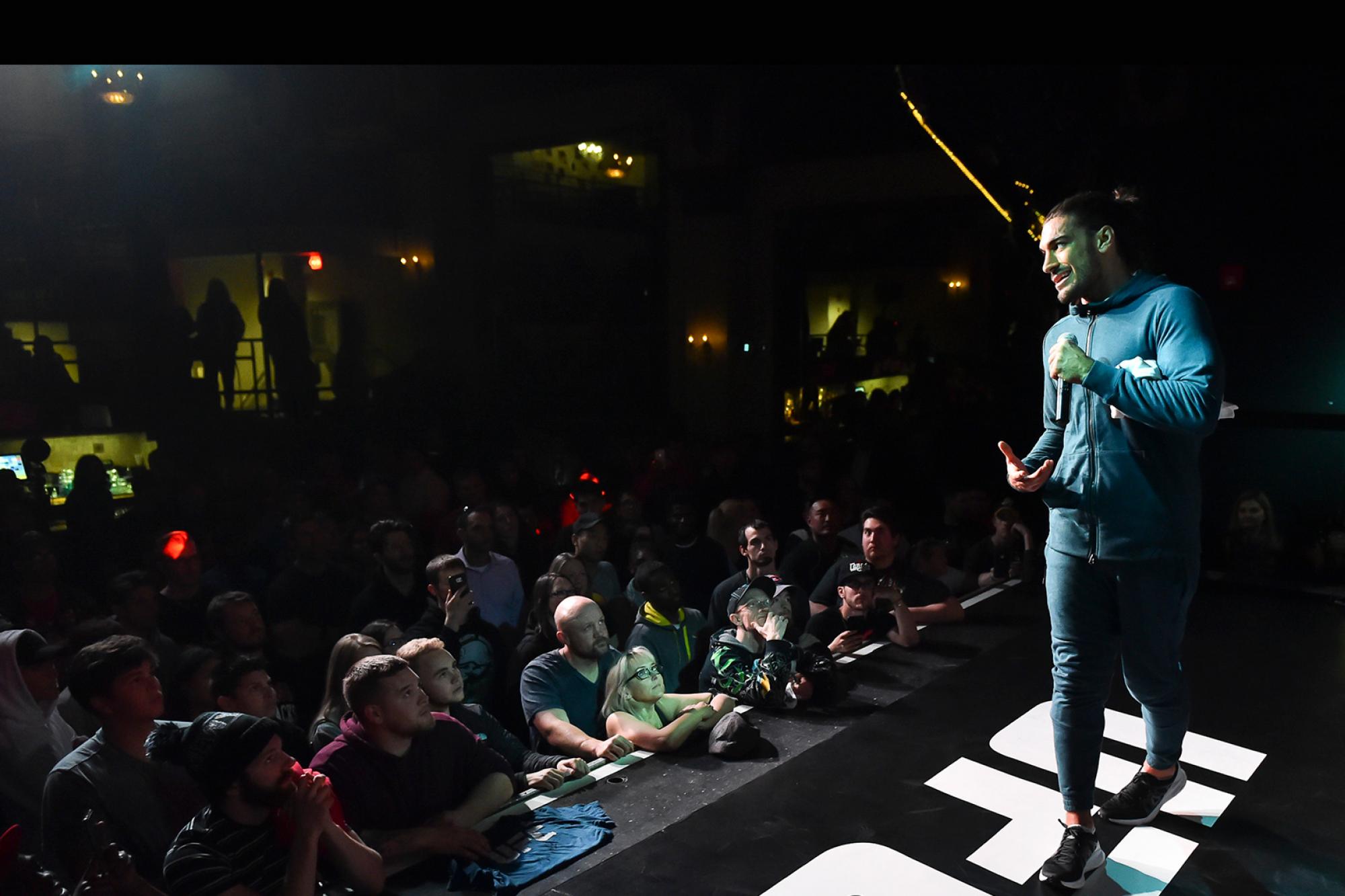 "I think in many ways, he has his back against the wall, and that could make him a more dangerous opponent, but I’m ready for anything, and I’m ready for Derek."
By Zac Pacleb • May. 3, 2019

Steadiness pretty much defines Elias Theodorou’s time as a UFC fighter. Since winning The Ultimate Fighter: Canada vs Australia in 2014, his record blossomed to 8-2 after his most recent 3-fight winning streak.

The most recent win, a close split decision against Eryk Anders in Toronto, established Theodorou’s place in the rankings, and with a fight with Derek Brunson on tap at UFC Ottawa, a top-10 spot is within reach.

Never at a loss for confidence, Theodorou is a blend of easygoing and focused, able to bounce from analyzing his own matchups to discussing his life as Invicta’s first ring boy.

When Theodorou spent some time in Las Vegas at the UFC Performance Institute in order to prepare for his fight with Brunson, UFC.com caught up with “The Spartan” to pick his brain about his matchup, why he decided to spend a week in Las Vegas and how he’s able to balance an active Twitter account with life as a fighter.

UFC: How do you feel and what interests you about your matchup with Derek Brunson?

Elias Theodorou: Really excited to fight Derek Brunson. Obviously, he’s the highest ranked fighter that I’ll be taking on. Really excited to test myself against someone who’s been there against some of the best. I think with him specifically, it’s intriguing because, again, this will be my 11th fight in the UFC and my 9th southpaw, so I know what southpaws bring to the table, and I’m looking to remain undefeated against all southpaws that I’ve defeated.

UFC: He’s coming off two losses, so is the thought that he might be a little more desperate there for you at all?

ET: Yes and no. Obviously, Derek is coming off of two losses. He’s coming off two losses to really tough opponents. You have Israel Adesanya, and obviously Jacare beforehand. I think with Derek, he’s been in this situation before leading up to his Dan Kelly fight, and he was able to blast through that, and then blast through the fight after that with Lyoto Machida. I think he’s very dangerous in the beginning, but as it goes longer, unfortunately he’s been known to let the fight kind of slip out of his hands. Well, alternatively, I think I’m really good at finding a way to win, so I think my strengths actually match up really well against his weaknesses. Again, he’s fought against some of the best, someone like Yoel Romero and was beating him until he wasn’t, and then other fights like the Anderson Silva fight where I think he kind of had a deer-in-the-headlights moment when he was fighting someone like Anderson Silva. I don’t slight him on that because obviously, Anderson Silva is the GOAT, and it’s kind of intimidating sometimes to fight your opponent, but more so with his last fight against someone like Israel Adesanya, I think the buildup kind of got the better of him. Especially as we saw on game day, it almost seemed like he was fighting a little scared, and he might not necessarily do that with me because I’m not the same striker that someone like Israel Adesanya is, but I think in many ways, he has his back against the wall, and that could make him a more dangerous opponent, but I’m ready for anything, and I’m ready for Derek.

UFC: Since your last fight, what did you take away and implement in your upcoming matchup?

ET: Obviously, it’s a little different when you fight at home. It’s really cool, obviously, for the obvious reasons. But also, not leaving afterwards and kind of sticking around with the 20,000 or so, I think it was like 17,000 people that watched at home, so I was sticking around in my hometown, so I bumped into a lot of those people that were there, so that was a cool feeling obviously and soaking that in and taking that into the holidays.

UFC: You spent some time at the UFC Performance Institute, so what went behind the decision to come to Las Vegas and workout here for a little bit?

ET: I’ve been to the UFC Performance Institute a couple times now. Originally it was more for fight camps in the capacity of when I fought in Vegas in the last week, fight week, etc., but about a month out, I actually took advantage of the trainers, the facility and kind of being the same way I’m a student in martial arts, being a student in the strength and conditioning, whether it’s with Kyle or with Heather and Bobby in regards to the personal training, in regards to the PT and the physiotherapy, so again, a lot of what’s really important in regards to mixed martial arts is getting as close to 100 percent on gameday, and that’s what I’m kind of using the week that I’m here and the prior week that I was out before testing out all the fun gadgets and whatnot and just kind of pushing it to the limit.

UFC: Shifting gears a little bit, you’re someone who is particularly active on Twitter. How do you balance utilizing social media while also not feeding the trolls who come out?

ET: I think the reason why I’m on social media quite a bit, especially on Twitter, is because I like the distraction. I’m kind of being cognitive dissonant about the fact that I’m going to get into a cage with another man that is as equally as confident that they’re going to knock my block off. It’s good to kind of distract yourself in some capacity, and it’s always great to engage with the fans. First and foremost, I’m a big fan of mixed martial arts, so it’s a great way to kind of chime in on today’s topics, and that’s what drew me in to being a fighter first: being a fan.