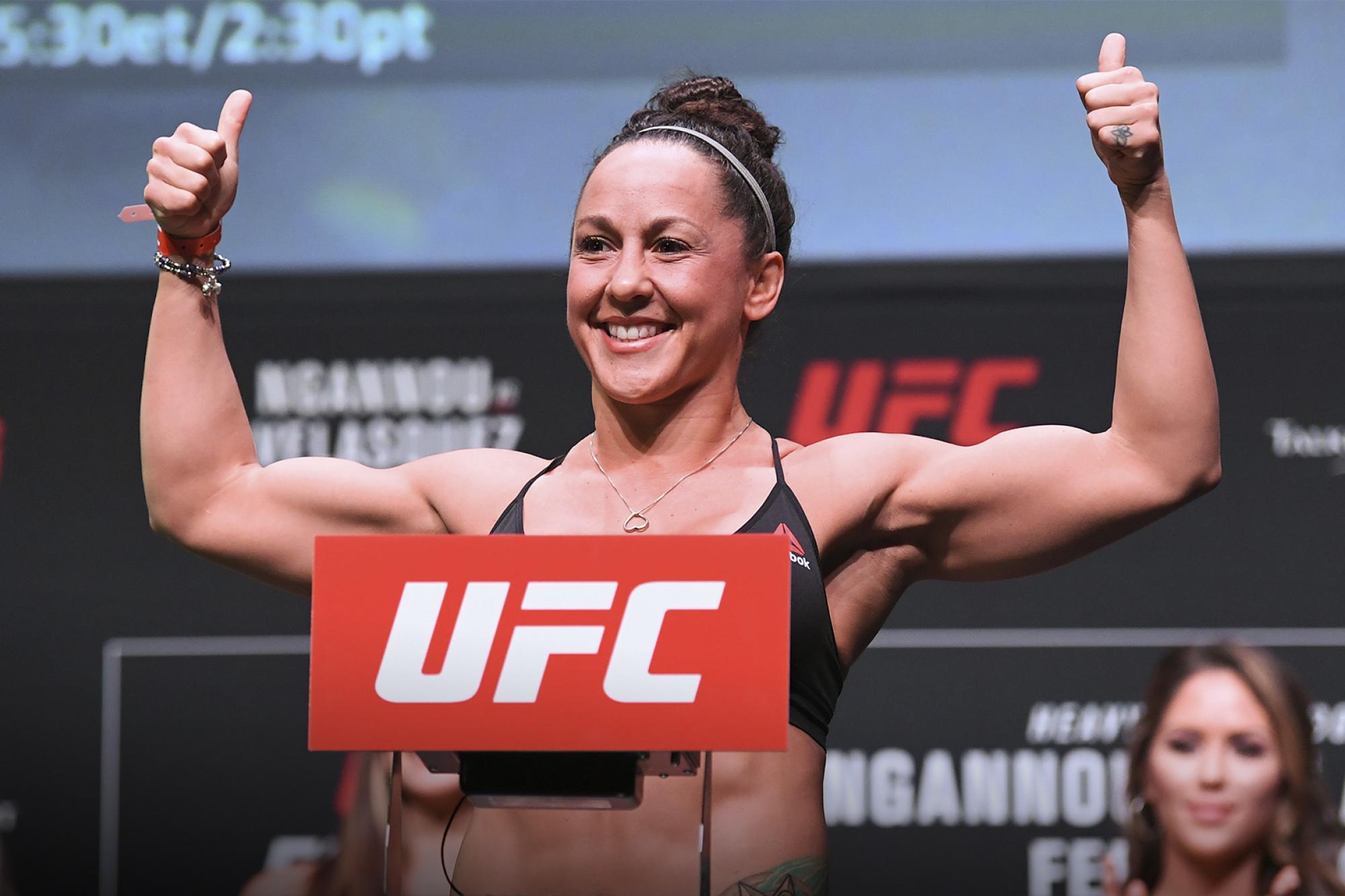 UFC.com caught up with Esquibel to talk about how she feels now that fight night is right around the corner, how she prepared for an opponent on short-notice and what it’s like going through back-to-back camps.
By Zac Pacleb • Apr. 26, 2019

Fight week was going relatively normally in Phoenix for Jodie Esquibel. There were interviews, signing posters, making weight, and all that was left was actually fighting her opponent, Jessica Penne.

But once Saturday came, there was no longer a fight to be had.

Penne pulled out after suffering an injury the morning of the scheduled bout, and that was that.

“It feels like somebody pulled your heart out of your chest and stomped on it,” Esquibel said of the late-cancellation. “It’s tough, but s*** happens. It’s the fight game, so it sucks. It’s hard.”

The two rescheduled their fight for April 27 in Fort Lauderdale, but then, on April 18, Penne once again pulled out due to injury. However, and thankfully for Esquibel’s sake, Angela Hill stepped in Penne’s place fresh off a first-round submission loss in Nashville just a month ago.

For Esquibel, this fight is a chance to get her first win in two years and start a new chapter in her career.

UFC.com caught up with Esquibel to talk about how she feels now that fight night is right around the corner, how she prepared for an opponent on short-notice and what it’s like going through back-to-back camps.

UFC: For this fight, how did a late change of an opponent impact your preparation for the fight?

JE: We studied a bit. (My coaches) studied more than I did just because it’s so close. Though it was a long time ago, we were scheduled to fight in the Invicta days, and so I feel like that kind of made the transition a little bit easier just because it was already going to happen. Yeah, it was years ago, but here we are again, so it’s cool.

UFC: So what do you think of Angela? She’s coming off a quick turnaround, how hard is that?

UFC: What is it like going through back-to-back camps?

JE: There wasn’t really that much time in between. I’m thankful for my body that held up. Actually, I feel healthier now than I did for the Phoenix fight, which is really interesting. You just battle injuries for camps, but I feel good. I was just mindful and really paying attention to what my body was telling me during training being in camp for so long.

UFC: Coming off back-to-back losses, how do you manage your sense of urgency to get the win and just take care of business?

JE: It’s a motivation. It’s not like we’re not motivated to win, but there is the little bit of an extra push. As long as it’s in a healthy way and not in a stressful sense of urgency type of way, then I invite it. Awesome. Yeah, we gotta go get a win. Let’s go get this.

UFC: What do you think of the matchup?

JE: I think it’s a good matchup. I think it is a classic striker-versus-striker type matchup. Her background is a lot of kickboxing, and that’s what I grew up doing too, and so I think it has the potential for a helluva fight. That’s for sure. I think that matchup is great for me.