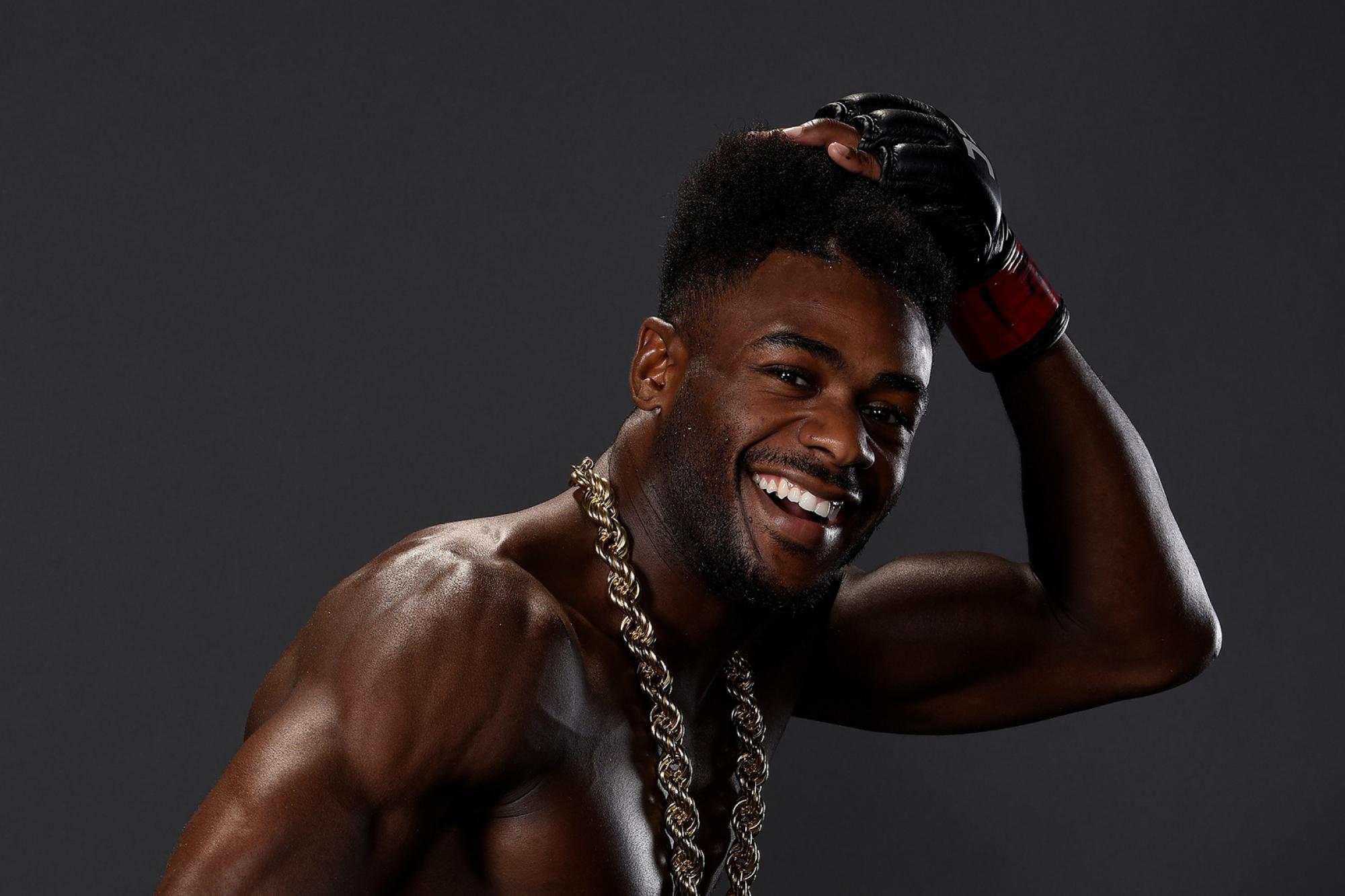 Confident fighters aren’t rare, but the particular group of athletes coming out of the Serra-Longo MMA camp in Long Island have a brash camaraderie that fits the area where they train. Bantamweight contender Aljamain Sterling is no exception to this trait.

The “Funkmaster” bounced back from his 2017 loss to Marlon Moraes with two wins in 2018, and he’s looking to catapault his way into the top-5 if he can defeat Jimmie Rivera in Phoenix. With that said, he is aware that his last loss came after a couple of wins, but he’s eager to show that he has grown from that experience.

“I was feeling myself you know? I thought I was hot s***,” Sterling said. “I came into that fight with like no nervous I kind of overlooked Marlon a little bit. He was a last-minute opponent and I realized that taught me a very valuable lesson early on in my career. You can’t look past the guy in front of you.”

Part of paying attention to the opponent in front of him is keeping a close eye on what they’re saying publically. Some fighters have tunnel vision, electing to only know learn about their opponents via their coaches and the pre-fight staredowns, but not Sterling. From interviews to posts on social media, he’s watching Rivera’s moves leading up to fight night.

“I think that if you don’t do the homework in terms of looking up your opponents fight footage and things like that, hearing the things that they’re saying you don’t get the true picture and the real read,” he said. “It’s almost as if you’re just going into the dark and just saying, ‘I’m just going to pick a fight with this person.’ You have to know what they bring to the table, you have to know how they’re feeling, and you got to know their psyche. I like to see how they enter Octagon, I like to see how they leave the Octagon, when Bruce Buffer is announcing their name and their whole demeanor when they’re inside in the Octagon.”

It only takes a couple minutes with Sterling to catch on to his confidence. With ease in front of cameras and a mic (he even hosts his own podcast, The Weekly Scraps), Sterling radiates self-belief. He also credits his team, whom he calls the “Long Island Stud Muffins,” for giving him good examples to follow, joke with and cheer for when they have their own fights.

Most recently, Al Iaquinta’s win over Kevin Lee at Fight Night Milwaukee has given Sterling particular momentum, wanting to keep the good times rolling after watching his former roommate of three years stake his claim at the top of the lightweight division.

“I look up to those guys,” he said. “I like to see the stuff they’re doing, the stuff that’s making them successful. I try to see if I can translate that into my own little recipe for success. Just having a team like that, Matt Serra and Ray Longo, I don’t think there is a more fun corner you can ask for or a louder corner that you could ask for. It’s just a real nice comradery that we have and it’s fun to be a part of. It’s not like guys are coming from other places, we’re all from Long Island.

“We’re all from the same neck of the woods that’s super important to me.” 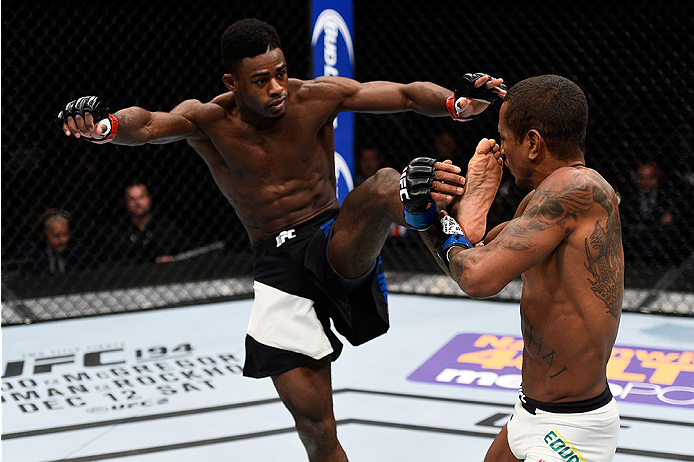 UFC: How are you feeling heading into fight week?

Sterling: I feel pretty good, as good as you can feel for fight week losing weight. A couple bumps and bruises from training camp the usual stuff but I always enjoy the process. It’s always a fun time for me even though cutting weight is never fun but you get to kind of live in the moment and enjoy this processing leading all the way up to fight night.

UFC: How have you seen yourself evolve?

Sterling: Just from my UFC debut until now, this is going to be my twelfth fight coming up, and I can see the difference. It’s just night and day in terms of my comfortability being inside the Octagon. I think I’m more well-rounded than when I first came on to the scene before I was predominately just a wrestler, a jiu jitsu player. And now I think I’m dangerous everywhere so I’m comfortable wherever the fight goes. It’s just nice to see that every single fight I take these incremental steps and continuous just get better every single time I step into the cage.

UFC: What allows you to pay attention to all the other stuff and then flip that switch once it’s go-time?

Sterling: I talk about this a lot on my podcast, The Weekly Scraps, by the way you guys can go check that out. The main thing is just having that understanding of what your opponent brings to the table. I’m bringing my skill set, your bringing your skill set and we’re gonna see who prepared the best and did their homework over the past 6-12 weeks. I think that’s the best way to kind of give it some perspective so people can understand my mindset and the things that I’m doing behind the scenes that people don’t necessarily get to see. They only see those 15 minutes while we’re in the Octagon but outside of that there is so much preparation that goes into that just to lead up to those big, huge glorified 15 minutes. Once you step into the Octagon everything has to kind of just focus on what you’ve been training to do, your skill set and how you’ve been preparing. Not worrying so much about what you opponent does. It’s one thing to know and just have it in the back of your mind so you can look for those tendencies, but at the end of the day you want to focus on your game plan and your strategy that you want to bring to the Octagon.

UFC: This is a top 8 match-up. What do you feel like you have to prove and what can you gain from this fight heading into the rest of your year?

Sterling:  I want to prove to the rest of this division, that I’ve heard rumblings from some other people from fans and things like that. And people are saying “Sterling is a gate keeper” but I don’t think I’m a gate keeper. I think I’m a true threat to the throne. I think this is the fight that is going to do that for me. I think going out there and winning in either a dominant unanimous decision fashion or going out there and actually getting the finish and a putting Jimmie Rivera away. He’s a super tough opponent, very respectable. He’s had one bump in the road since he’s been in the UFC, besides that he has been on a tear. I’d like to be the next guy to add it to the resume of defeating Jimmie Rivera.

UFC: Your division has had a lot of movement at the top. What do you think should be next for TJ Dillashaw? Should he have the rematch with Henry Cejudo at bantamweight?

Sterling: I’m going to have to disagree and say a lot of people aren’t interested in that fight, especially us bantamweights we are definitely not interested in that fight. They have been tying up this division for long enough. There’s worthy contenders, Marlon Moraes has stacked his claim to be the true number one contender he should be next in line for sure for a fact based off the body of work that he’s put together. I can’t see anyone else that makes sense for him to fight right now…..No more tie ups man. We got worthy contenders here, we’re here fighting. Let’s not log-jam this division anymore you got good guys with some good names that can really put some, I really think we can put some asses in the seats and that’s the way I look at it. Cejudo stay your ass where you belong, TJ fight Marlon so that we can keep this division moving.

I think the flyweight division with Cejudo at the top now, has honestly given it some new life. It would be cool to see if they can use that and maybe propel that division more into the public eye and make people actually respect it. We’re ten pounds apart, I just can’t see what the difference is between 125 and 135 in terms of the public opinion. If you like the 135ers, 125 can do it just as well if not better so that’s the way I kind of look at it.