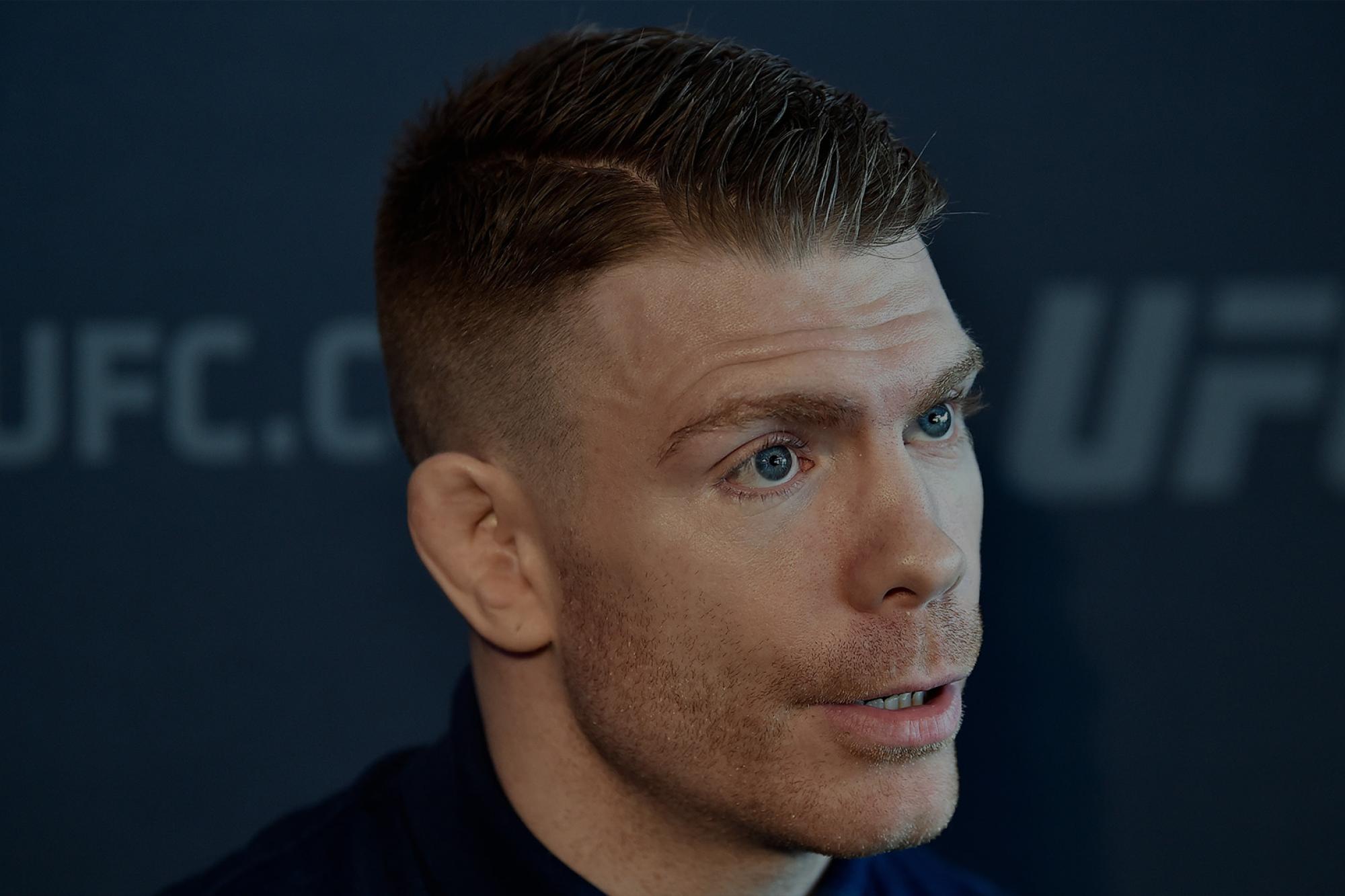 “That’s still the goal and it’s what’s keeping me going,” he said. “I still feel like I’ve got the ability to knock off some of these really big ranked guys and this is obviously the first step in that direction."
By Thomas Gerbasi • Feb. 15, 2019

Paul Felder could probably do just about anything for a living and be successful at it. He chose fighting. Or maybe, as so many of his peers have claimed, fighting chose him. Or better yet, once fighting got its hold on him, he had found something that was his and no one else’s.

“Martial arts and testing myself has been something that I fell in love with when I was 11, 12 years old,” Felder explains. “I like to fight. It scares me to f**king death every single time, I get anxiety over it, I cut a ton of weight, it’s a pain in the ass, but that first feeling of getting your hand raised in that cage, it was a drug to me, and I keep coming back to it every time.”

Fifteen times Felder has had his hand raised as a professional prizefighter, and he will look to make it sixteen when he faces James Vick in Sunday’s UFC Phoenix co-main event. It’s a chance for him to win his fourth straight bout at 155 pounds, a streak interrupted by a late-notice loss to Mike Perry in a welterweight bout last July, and an opportunity to keep the dream of a world title alive. That’s every fighter’s dream, right?

“That’s still the goal and it’s what’s keeping me going,” he said. “I still feel like I’ve got the ability to knock off some of these really big ranked guys and this is obviously the first step in that direction. I’ve got my chance again, I’ve been here before, I’ve had my ranked opponents and I’ve just got to capitalize on it. Once I get a few in a row, get back on a win streak, maybe fight for that belt, win that belt, make a ton of money, then I’ll be able to say, ‘Okay, I can focus on an acting career, I can focus on a commentary career.’ But until then, I’ve still got a few good solid years to push for it.”

But what if there’s more to this for Felder than a title, some financial security and a place in the history books? What if he was simply born with something in his blood that can’t be turned on and off, something that will always be inside him? At 34, he’s still a young man and he could very well be in his athletic prime. But there will come a day when he has to walk away from this.

“I’ll know when it’s done,” he said. “I’m not afraid to walk away. I’m doing it because I still love it. I still love training. Every time I spar and I get hit, I’ve still got that fire in me. If that ever starts going away and I become lackadaisical in my training and my sparring, my coaches will know it and I’ll know it and I’ll retire. But that day is not today, that is for sure.”

Felder promised his mother that he won’t fight past the age of 40. I remind him that the last guy from Philly who made that promise to his mom, Bernard Hopkins, fought until the age of 51. Felder laughs, and he’s at ease as fight day grows closer. It’s what makes him different, not just from other fighters, but from other human beings. Yes, the nerves are always going to be there, but it’s the sacrifice, the grind, the things that everyone hates, that he’s embracing.

“When I’m in training camp, especially towards the end, I like to do some things by myself,” he said. “In the mornings, I wake up, I have my coffee and I go for a run. I go to the gym, sit in the sauna, and I like to do those things by myself. I have plenty of teammates that are more than willing to stand next to me and run those miles with me, but when it gets closer, I don’t want anybody there. I want to be by myself with my own thoughts, getting my mentality right for fight night.”

There used to more isolation for Felder during the nights he spent living in the basement of Duke Roufus’ gym in Milwaukee. It was the kind of existence we’ve all experienced through the movies, but never want to do for real. That was essential for Felder, especially after a 2016 loss to Francisco Trinaldo.

“Part of it was literally financial,” he said. “When I first came to Duke’s, I was coming off a loss, I got a new contract, and it wasn’t what I had wanted because I lost to Trinaldo, so it was live in the basement. Duke had a room for me, I had a hot plate, we had a fridge and a TV and a way to make it work for where I was.”

Ultimately, things changed for Felder in Milwaukee. He scored three consecutive knockouts, got a commentating gig with the UFC for which he has drawn rave reviews, and these days, he’s moved from the basement to renting a room in a two-bedroom apartment.

Watch Paul Felder's Top 5 finishes ahead of his co-main event fight at UFC Phoenix this Sunday live on ESPN.

He laughs, but I wonder if “The Irish Dragon” has gotten civilized.

“We’re not talking Rocky in the mansion civilized, but it’s a slight step up.”

Felder is quick to point out that his hunger and grit hasn’t gone away in the slightest, saying, “I’m still a savage and an absolute maniac. Duke can tell you that any day and my sparring partners will tell you that.” Checking in with various sources isn’t necessary on that count, as you can hear the intensity in Felder’s voice, whether he’s Octagonside on the mic or doing an interview for this weekend’s bout. There are many reasons for competing in this sport, but Felder’s reason may be the purest. Yeah, money is important and titles are nice, but there’s something to be said for simply embracing the fight.

He’ll go back to the feeling of getting his hand raised, but there’s more to it than that.

“I keep saying as I get closer and closer to each one of these fights that I’m done, I don’t need to do this,” Felder said. “And then as soon as I get there and I get my hand raised or I don’t get my hand raised, it doesn’t matter, I want to come back for more. I’m addicted to pushing myself, and when I’m in there fighting another dude, tasting my own blood, there’s something about it from when I was a little kid. People f**ked with me and this is my way out. This is my therapy. I wasn’t a big, tough kid. I was a scrappy kid, but I was a red-headed kid from South Philly. I got picked on, got f**ked with, and now look at me, mother f’ers. It’s therapy to me. It’s an adrenaline rush. Some people go skydiving; I fight in a cage against other human beings.”

I remind him that what he has is rare, and that even when he leaves the sport as an active competitor, the fighter will remain. I’ve seen it too many times for it to not be true.

“I will always train,” Felder said. “I will probably always do some sort of Muay Thai and Jiu-Jitsu in my life and I’ll probably be a bit of a dick on the mats. (Laughs) I’ll be that old guy that’s still trying to beat everybody up and gets yelled at because he used to be a fighter. It will be hard, but there’s other things that I haven’t accomplished in my life that don’t revolve around fighting whatsoever that I need to do.”

Until then, just give Felder some gloves and a mouthpiece and point him toward the Octagon. Right now, there’s no place he’d rather be. And if you don’t get it, don’t worry. He gets it, and that’s all that matters.

“They’ll never get it unless you have it in you,” he explains. “They’ll never understand. Really smart people can be fighters too, but really smart people that aren’t fighters will never understand why we put ourselves through what we put ourselves through. I have so many people hitting me up about the dangers of the sport and, of course, it’s all scary, but you clearly don’t have it if that’s the first thing your mind goes to. Because it’s not the first thing I think about and I’m the one in there getting hit. My mind doesn’t go to, oh, my head hurts. It’s goes to competition.”