Curtis Blaydes Is A Complete Package

Though a wrestler at heart, Curtis Blaydes is reaping the benefits of high-class training and sparring partners to round out his game.
By Steve Latrell, on Twitter: @TheUFSteve • Sep. 4, 2019

“A little fatigued, but nothing out of the normal.” 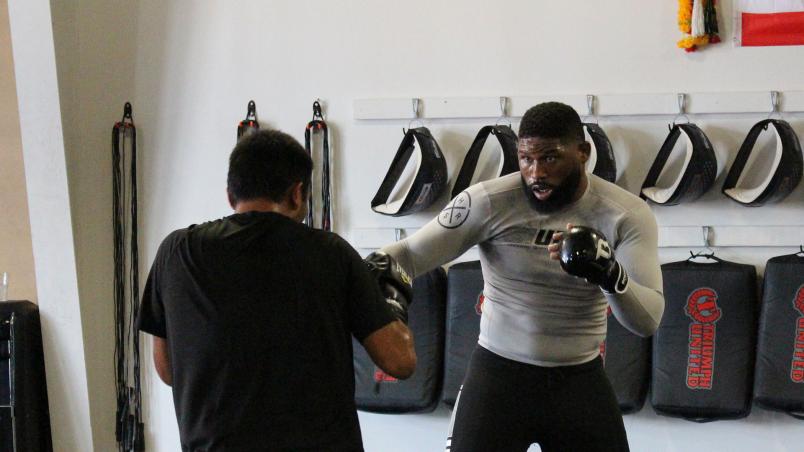 It’s a Friday afternoon, and Curtis Blaydes has just finished a long week of practice. It’s profoundly normal that he’d be getting tired. But considering he’s just gone round after round, day after day with teammate Alistair Overeem, “a little fatigued” borders on the miraculous.

Watching the two men ply their trade in the Octagon, as they did last year at UFC 225, inspires plenty of its own awe. Watching them go at it up close in the cozy confines of Denver’s Elevation MMA, and you can practically feel the earth tremble. It’s also an unusual alliance: the 28 year-old Blaydes defeated the former Strikeforce/K-1 champion Overeem by TKO that evening in Chicago, and a short time later, Overeem chose Elevation and Blaydes as his new training partners.

“He’s always been cool with me from the get-go - before we fought, after we fought - very cool guy, very friendly guy, very humble guy,” confirms Overeem, making his decision sound much simpler than it would to those on the outside looking in.

“That’s not the most common thing in fighting, as you know,” explains Elevation coach Cody Donovan. “In combat sports, there can be animosity and stuff like that. That just speaks to what a professional Alistair is. He was like ‘Yeah, cool. We fought. I lost.’ He knew that putting his ego aside, putting his pride aside and focusing on that relationship would ultimately be a good move for him. And it was.”

“It’s the beauty of martial arts,” concurs Blaydes’ striking coach Vinnie Lopez. “It’s the beauty of this sport. There is no animosity. We’re here because we love to challenge ourselves. We’re here to see exactly what we have deep down inside. There is no ego involved if it’s done right. So a guy like Alistair can suffer a defeat from a guy like Curtis, but look at is as a learning opportunity, like, ‘Wow, that was effective. What the hell was that? Because I want some of that.’ Then they come, they train together, Curtis gets a little bit of Alistair, Alistair gets a little bit of Curtis, and we all grow together. It’s a beautiful thing.”

That “beautiful thing” has in part brought both the elder statesman and the younger contender significant heavyweight wins in 2019, and poised Blaydes to piece together another win streak starting Saturday at UFC 242 in Abu Dhabi. Always most comfortable when he’s wrestling, Blaydes will get his chance to shine against a kindred spirit in Shamil Abdurakhimov, who has racked up some quality wins in the division with his own prowess on the mat.

Go inside the life of Curtis Blaydes' training day.

“I heard he’s a wrestler. I’m also a wrestler, but I feel like I’m a better wrestler. I know he has a decent overhand, I know he’s been in the UFC for at least a year and a half, so he’s not a newbie. This will be the first time going up against a guy whose grappling is the most dangerous part of his game as opposed to his hands—besides Oleinik, but Oleinik wasn’t a wrester, he was a jiu-jitsu guy, so it was different.”

Lest we be tempted to think this bout will be a wrestling symposium only for the hardcores, the Elevation coaches are quick to warn that Blaydes is far from one-dimensional.

“Curtis’ striking is on another level,” says Lopez. “He’s very, very dynamic. The athleticism that he brings to the table, he makes it super easy for a guy like me. I see what he can do with his feet and his changes of direction, and I just implement a few striking tactics, and he just takes it and runs with it. His own natural athleticism that he was born with comes to light. It’s just…he hasn’t had to use it yet. Eventually though, he’s going to have to use that, and it’s very comforting for us to know he has that tool in the tool belt when he needs it.” 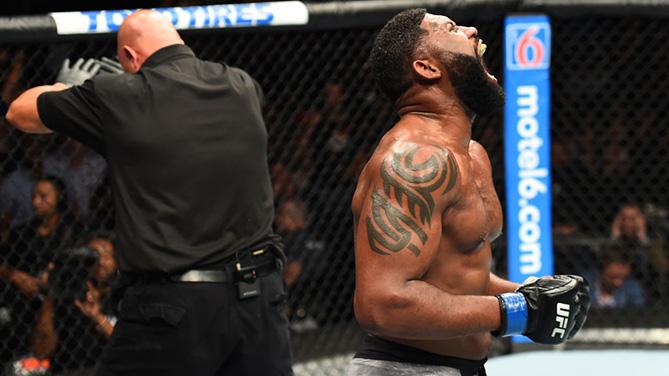 So he’s set to surprise some people?

“Absolutely,” declares Lopez. “When somebody stops a takedown, and he opens up those hands and throws more than one or two…it’s a beautiful thing to watch.”

“Imagine you’re a wrestler who hadn’t done that much striking up to that point,” elaborates Donovan. “And (now) you’re striking with a K-1 champion. The advances that Curtis has made in his striking in the past two years? It’s crazy. Fans don’t even get to see it yet. He’s a really complete package as a heavyweight. He’s a really good striker. He’s doing advanced concepts. His striking coach thinks outside the box, and they’re putting together a pretty cool package there, and to be able to test it on somebody like Alistair is priceless.”

“Sometimes I’m the hammer, sometimes I’m the nail,” explains Blaydes. “Today I was a bit of a nail, but that helps. I would rather get beat up in practice against a world-class athlete like Alistair, as opposed to on the bigger stage of the world, in front of millions. I’ve been in camp for over eleven weeks now, so I’m just ready to get in there and get this over with.” 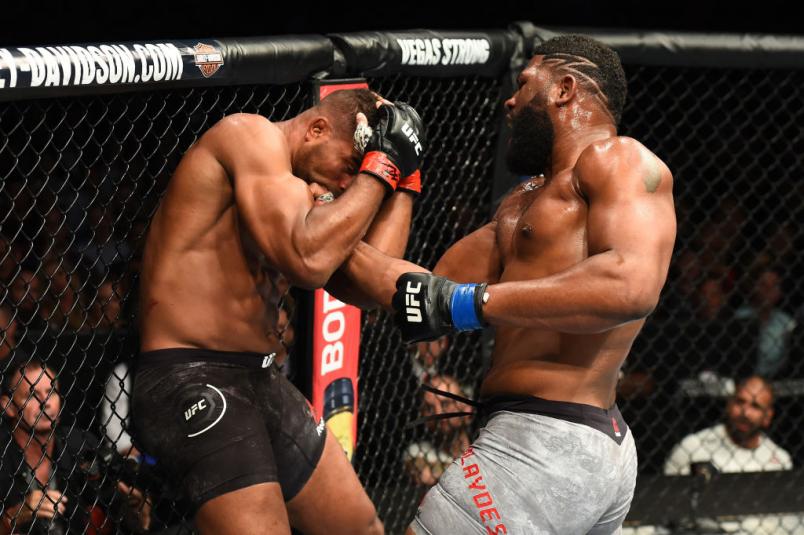 That’s a long stretch to be sparring with the likes of Alistair Overeem day after day, but there’s something he’ll remember about this camp more than anything else.

“My daughter’s birthday, she turned one at the end of July. That’s probably the biggest moment of this camp.”

So does being a new father change how he perceives his chosen profession?

“Oh, most definitely. I need this money. Before it was just for play, for fun. But now I can’t go home with half a paycheck.”

Still, watching him practice endlessly with one of the all-time greats, there were few, if any, signs that fatherhood has caused Blaydes to take a more cautious approach to his game.

“Oh no, my style is always the same. My wrestling protects me.”