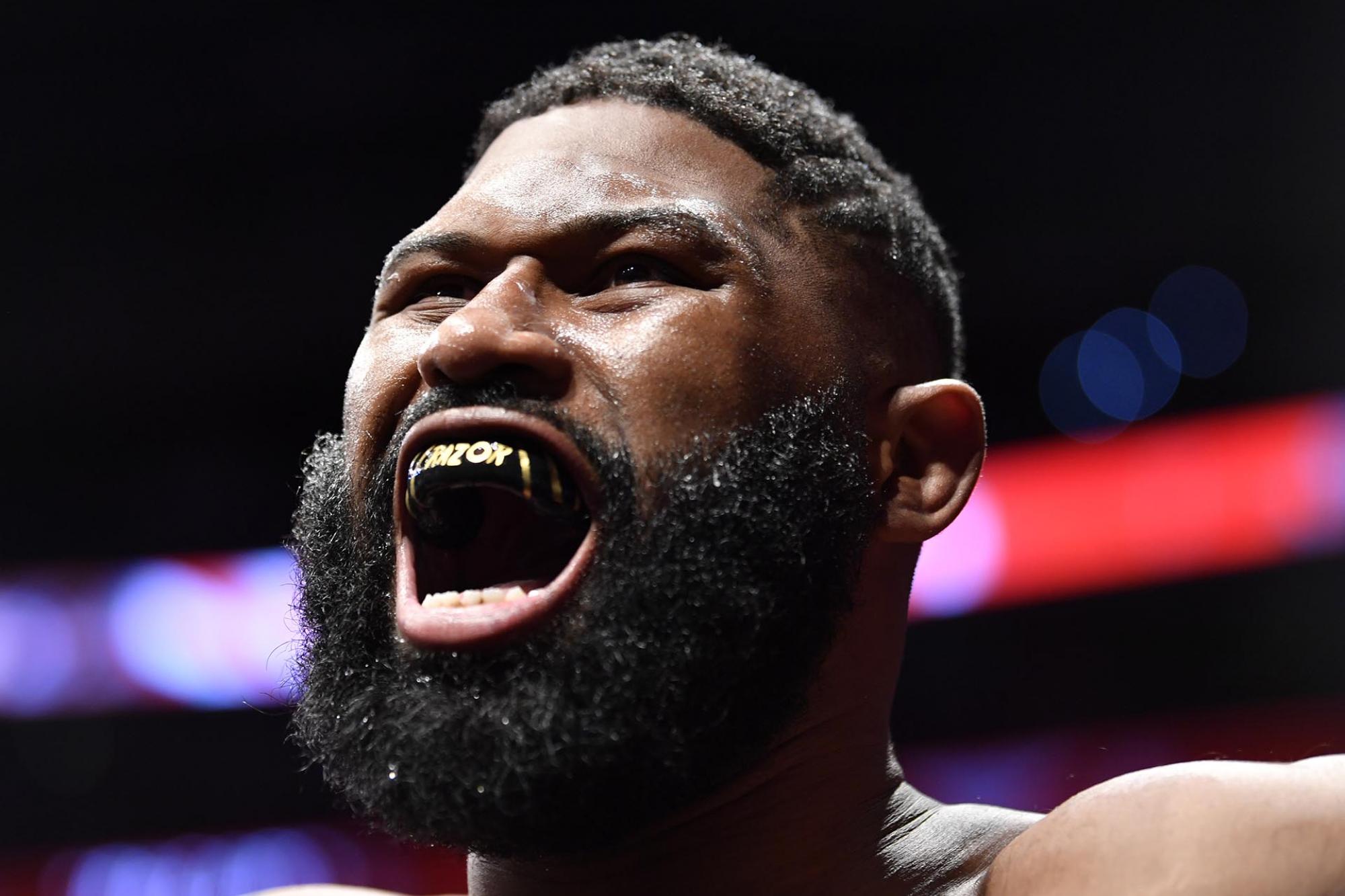 Curtis Blaydes And The New MMA

No. 3 Heavyweight Blossoms Into All-Around Threat
By Steve Latrell, on Twitter: @TheUFSteve • Jun. 17, 2020

If you were someone unfamiliar with the fighting style of Curtis Blaydes, a cursory study of the records he currently holds among active UFC heavyweights would tell you a lot of the story: most takedowns landed (45), the highest takedown accuracy (55.6%), the most top position time and the best top position performance.

In short, the man is a wrestler; perhaps the most feared wrestler in the entire division.

It’s likely with this information in mind that his opponent this week at the UFC Apex, Alexander Volkov, made a casual assessment of their matchup as not much more than the classic grappler vs striker matchup.

“Obviously, he’ll count on his wrestling,” Volkov told MMAJunkie’s Farah Hannoun. “That’s his only recourse. Otherwise, I will defeat him with my striking…despite my limited training, long-distance flight and jet lag, I’m prepared for our upcoming fight.”

“I mean, Volkov is right,” says Blaydes’ longtime Elevation MMA coach Cody Donovan. “The only chance he has at beating Curtis is striking. But I think that’s a pretty slim chance. Volkov is a talented striker, but that style of striking is not new. It’s a style that we’re totally ready to deal with.”

“My game plan is always the same,” says Blaydes. “It’s a pretty universal game plan: pressure, pace, wrestling, ground-and-pound. It doesn’t matter who you are; Cain Velasquez, Stipe, DC, Volkov…it works on everyone.”

Volkov sits atop nearly as many stat categories in striking as Blaydes does in grappling, but as Donovan sees it, the fear of going to the mat with Blaydes is almost as dangerous as actually doing so. Almost.

“Like most of Curtis’s opponents, Volkov will be so worried about the wrestling that you shouldn’t be surprised if he forgets how to strike,” he warns.

Coach Donovan has had a front row seat to Blaydes’ UFC ascension, working with the Illinois native since his second fight in the promotion back in 2016. He divides the evolution of “Razor” into two categories. 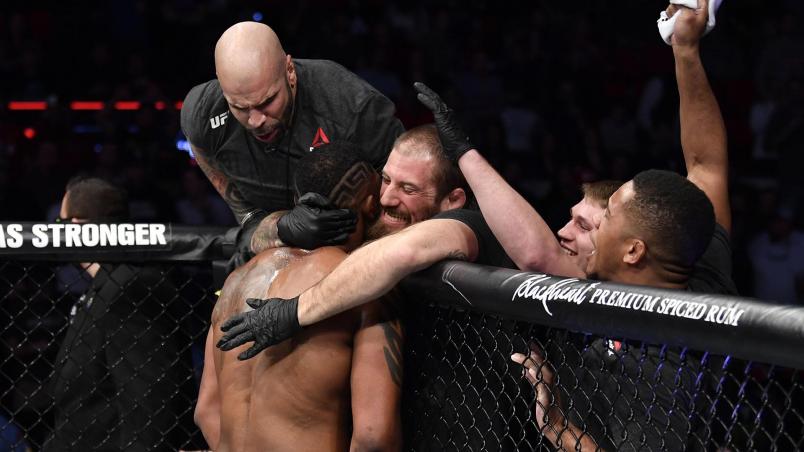 “There’s the maturity piece, which we saw in the last fight against Junior Dos Santos. When the wrestling wasn’t working, he transitioned to his other skills.”

His increased maturity was borne in no small part by becoming a father, something his coaches would remind him of when he was going hard in practice.

“You’re a father now,” they would say. “You don’t get to go out there and make boneheaded decisions and rush things. It’s time to actually take all of these skills that you’re learning and make them happen in the cage. Make them happen when the lights are on.”

Blaydes indeed made it happen, stopping the Brazilian star early in the second round of Fight Night Raleigh’s main event back in January, just a few months after halting Shamil Abdurakhimov at UFC 242.

“The other piece is what he’s done with his striking,” Donovan continues. “Vinnie Lopez is his striking coach, and what the two of them have done is amazing.” 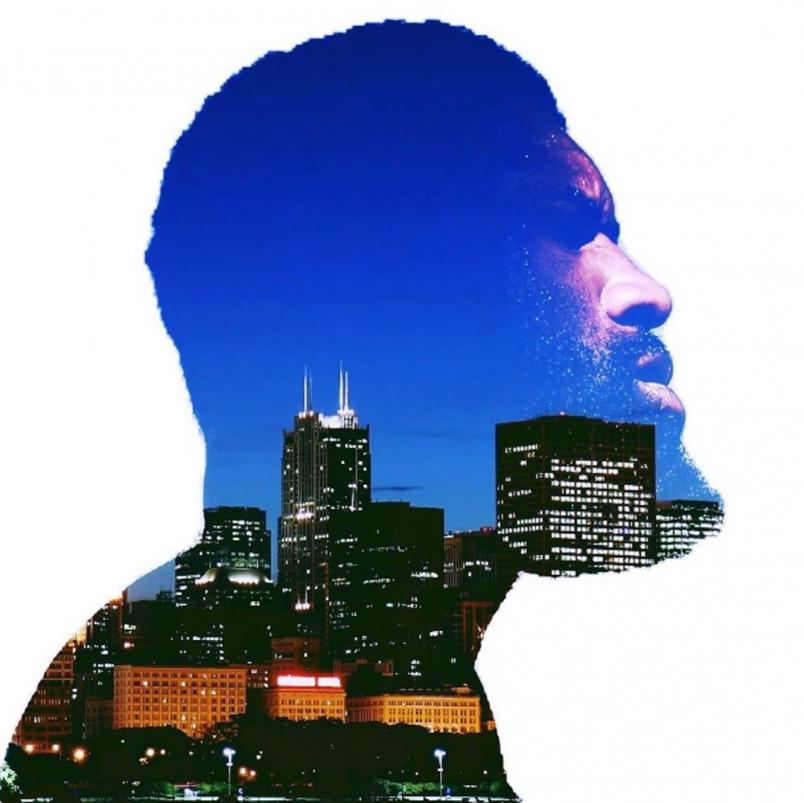 “My striking has organically grown off my wrestling,” explains Blaydes. “My striking coach, I’ve been blessed to meet him. He was able to adapt and give me combos and footwork that blended into my striking. The high-low won’t work if you can’t wrestle. Guys won’t respect it. That’s how I got Junior [Dos Santos].”

“Curtis had two left feet when he came to us. He really did,” continues Donovan. “You look at his first fight with Francis Ngannou, there’s no stance. There’s nothing. It’s translating one fight at a time. You guys are getting to see little pieces of it. But to the people who come and watch him hit mitts and watch him spar, he has some of the most dynamic footwork in the entire heavyweight division. Everyone keeps labeling him as a grappler, but the way he uses his wrestling, his boxing and his footwork to set up striking? It’s next level. The new heavyweight. The new MMA.”

The subject of Ngannou is a bit of a sore one with the Blaydes camp, as “The Predator” accounts for the only two losses on an otherwise stellar run at heavyweight. But with only Stipe Miocic, Daniel Cormier, and Ngannou himself ahead of Blaydes in the rankings, a trilogy seems almost inevitable, be it sooner or later. 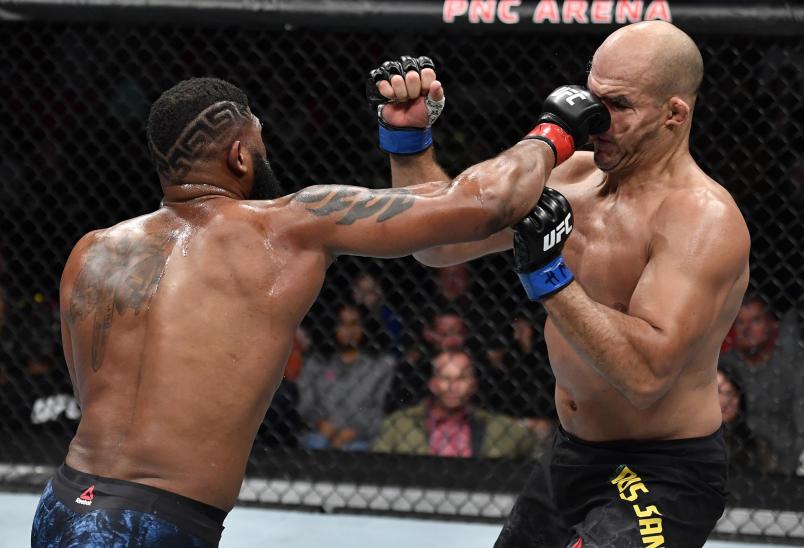 “We certainly hope so. In China, we were very confident in how that fight was going to go. Curtis admittedly froze up a little, got caught behind the ear, fell down. I obviously have a bias, but I think that was an early stoppage. But it is what it is. But we were very confident in all aspects of that fight, including striking, and it didn’t go our way. But we’ll be confident if we get the opportunity again. He thinks about it daily. We all want that more than a title shot at this point.”

“I see myself winning,” Blaydes says of the potential matchup. “I see myself taking him down like I did in the first fight, and this time, land the heavy ground-and-pound.”

A title shot might also be a bit of a wait, with the heavyweight title waiting on another trilogy between Miocic and Cormier to play out.

“I know the whole division is frustrated with it, but Curtis has a pretty unique frustration because the top-top is super stagnant, and the guy sitting at No. 2, Francis Ngannou, he’s already lost twice to. Things aren’t feeling super hopeful: the top doesn’t move, he’s not getting to fight Ngannou again until something happens with Ngannou, a guy who definitely deserves a title shot before he has to face a guy he already beat twice. He’s definitely frustrated. He wants the movement. He’s in his prime and he’s got to sit around and watch these old guys and wait for them to retire. It sucks.”

“I’m just happy to know that [Miocic and Cormier] got the contracts all signed and it’s going to happen officially,” offers Blaydes. “It gives me the ability to project my own trajectory into the future.”