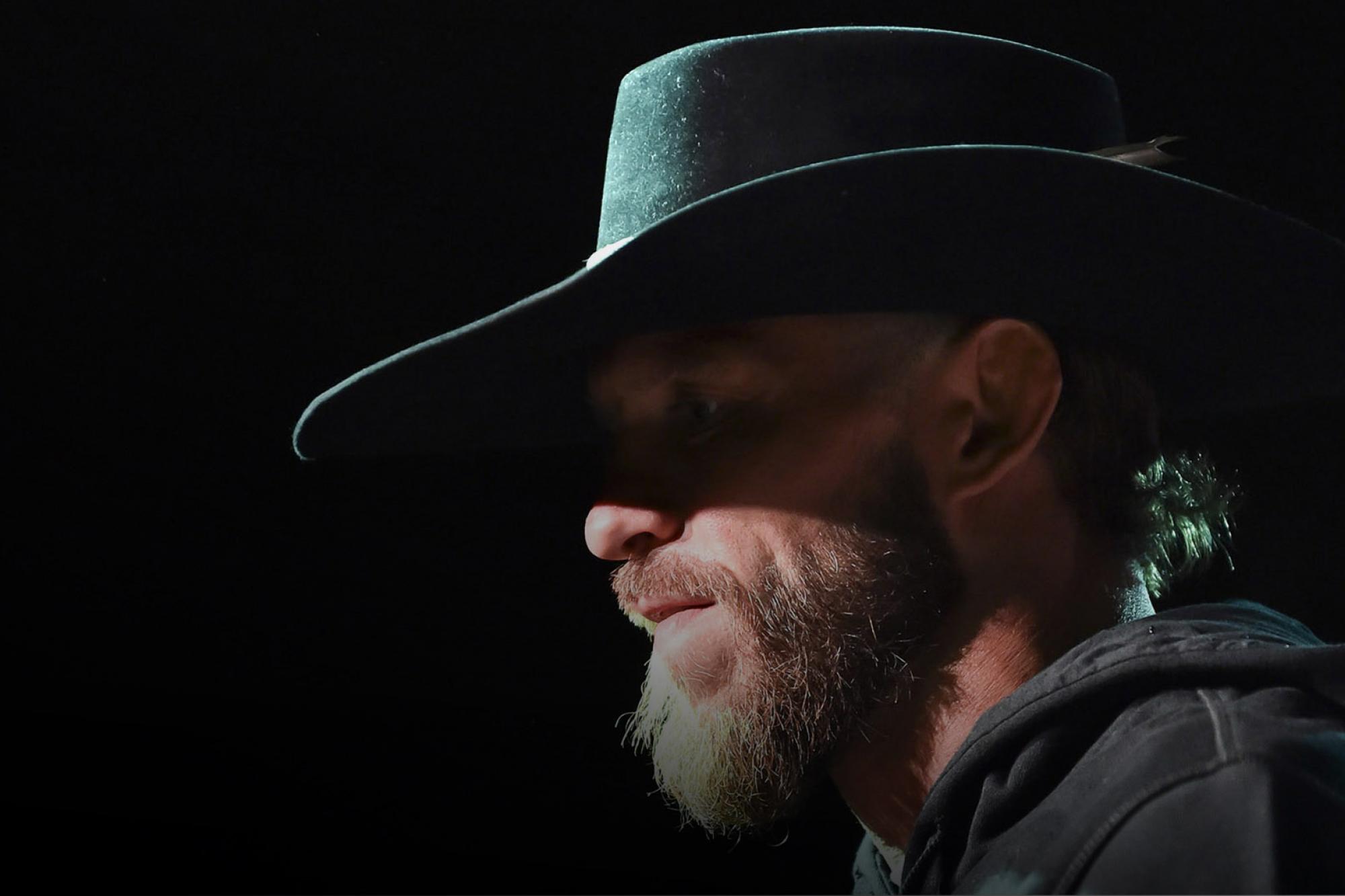 Cowboy Cerrone: “The time has come”

Record-breaking veteran has some unfinished business
By Thomas Gerbasi • May. 2, 2019

The numbers don’t lie. But maybe Donald Cerrone was lying to us the whole time.

Always portrayed as the wild child of mixed martial arts, Cerrone was the guy as comfortable being a daredevil outside the Octagon as he was a gunslinger on fight night. And if he was off taking those risks when the gloves were off, all it took was a call from the UFC for him to drop what he was doing momentarily to go fight some killer and then get back to his adventures.

In other words, he was too reckless to be taking the fight game seriously. His success was more from natural ability and a willingness to scrap than from an ever-evolving skill set.

But back to those numbers:

16 – Most finishes in UFC history

16 – Most post-fight bonuses in UFC history 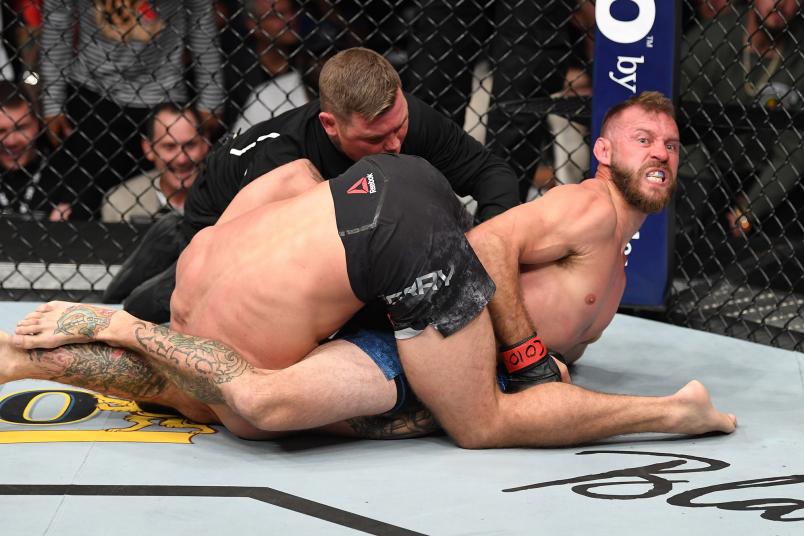 All of a sudden, Cerrone wasn’t just the have gloves, will travel guy anymore. All-time great numbers proved that “Cowboy” was fooling us. He was taking this seriously all along.

“We train hard; we just don’t ever show it,” Cerrone admits. “We’re always out just showing the fun stuff we do. But we train hard. As a matter of fact I’ve got four guys out with me right now. We’ve got a whole team just to train while we’re out here doing this. So we get it in. I’m very passionate about the sport and training but I’m also very passionate about f**king off and having a good time.”

Cerrone laughs, pulled from his good time momentarily in late March for a media tour in Canada to promote his Saturday main event in Ottawa against Al Iaquinta. It’s as important a fight as he’s had in a couple years, as a win over New York’s “Raging Al” will not only mean a second straight victory since his return to 155 pounds, but it will move him further up the lightweight rankings and possibly into the title race. And that’s worth any sacrifices needed to make the division’s weight limit.

“It never has been an issue,” said Cerrone of the cut to 155. “I went to 170 to take a little break and have some fun. That allowed me to really f**k off. (Laughs) At ’55, I have to watch my weight and train hard and make sure I keep it down. 170, you want to talk about being wild and having fun, that was that journey.”

Cerrone had success in the welterweight division, going 6-4. But as the fights added up, some believed that the Colorado native’s ceiling had been reached. He was always going to be a fan favorite, deliver action-packed fights, and take on anyone, anywhere at any time. But a championship run? That ship had sailed.

But midway through 2018, the opinion of the veteran prizefighter began to change when Dacson Danger Cerrone was born. Sure, the recklessness was still there, but now Cerrone was a dad, and there was more to fight for. “Cowboy” had grown up. 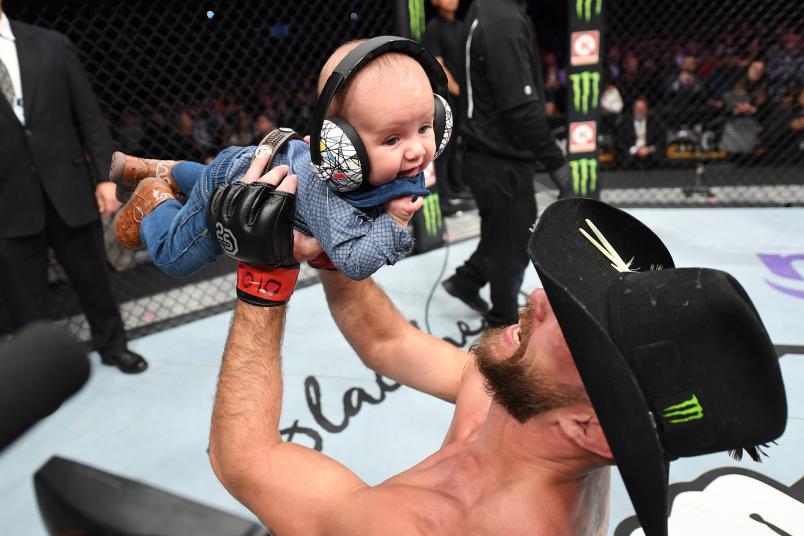 Donald Cerrone celebrates with his son Dacson Danger Cerrone after defeating Mike Perry by submission in their welterweight bout during the UFC Fight Night event inside Pepsi Center on November 10, 2018 in Denver, CO). (Photo by Josh Hedges/Zuffa LLC)

That’s not just a life assessment, but a fight assessment, and after an emotional win in his hometown of Denver over Mike Perry in November, Cerrone moved back to the lightweight division in January and ended up with a pair of bonuses for his finish of hot prospect Alexander Hernandez. All of a sudden, Cerrone was a contender again, but he’s not playing it safe. Taking the Iaquinta fight proves it.

“I get the call anywhere, I’m in,” he said. So some things will never change. But Donald Cerrone won’t fool us anymore. We know he’s serious, and we know he’s not leaving until he gets a belt.

“I can see the end of the tunnel now,” he said. “I’ve probably got, who knows, I’m hoping five more years in the sport. I’ve set a lot of records, there are just a couple more things I need to do before I hang it up.”