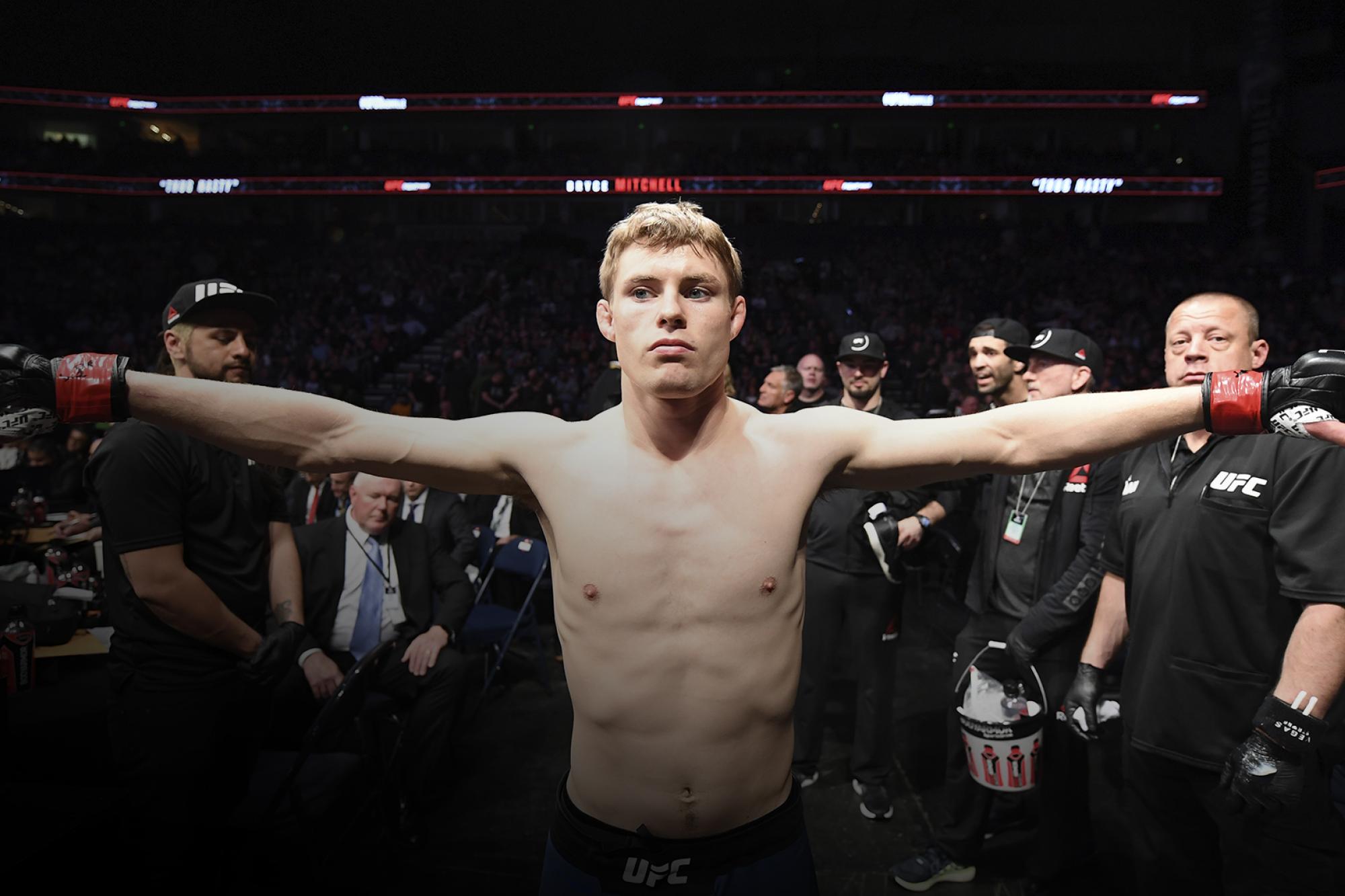 Bryce Mitchell comes into UFC DC on a two fight winning streak, and he's done that by sticking to his roots.
By E. Spencer Kyte, on Twitter @SpencerKyte • Dec. 4, 2019

Bryce Mitchell has needed just two UFC appearances to emerge as a burgeoning fan favorite in the talent-rich featherweight division.

“I’m stoked to have people rooting for me; it’s awesome,” Mitchell said Tuesday after arriving in Washington, D.C., where he’ll look to make it three straight victories inside the Octagon this weekend when he takes on fellow up-and-comer Matt Sayles. “I’ve surrounded myself with good teammates, good coaches and I’ve always wanted to have a good reputation and put on a good show.”

That desire to put on a good show has been apparent since the Arkansas native introduced himself as a member of Team Cormier on Season 27 of The Ultimate Fighter.

While he fell to eventual winner Brad Katona in the semifinals, Mitchell edged out fellow Team Cormier representative Tyler Diamond in the competition’s “bronze medal match” at the finale to score himself the first opportunity to publicly lobby Reebok to make him some camouflage fight gear and secure his place on the UFC roster.

A power tool accident that could have been horrific, but ultimately became something he could chuckle about, elevated his profile coming off his win over Diamond and then a victory over Contender Series grad Bobby Moffett in a Fight of the Night-winning scrap in March cemented him as someone to keep tabs on in the highly competitive 145-pound weight class going forward. 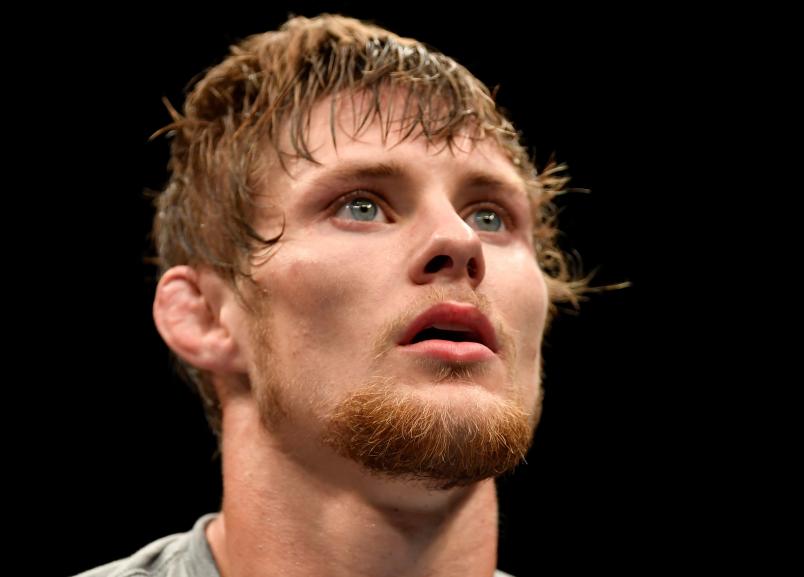 It also gave him a chance to reunite with his TUF coach for a post-fight interview where he promised his mom a steak dinner when he got back home and got loud and proud about representing his home state on the biggest stage in the sport.

“It was delicious,” he said of the steak dinner with his mom. “I got a big old rib eye.”

Where some may simply see Mitchell as a kid from the outskirts of nowhere who hunts, fishes and lives in a fifth-wheel trailer under a metal-roofed structure he built himself, it’s that authenticity and commitment to his Arkansas roots that makes the up-and-comer easy to get behind.

In a sport where a good number of people will not hesitate to suggest that you need to train at a world-class facility alongside elite competitors in order to succeed, Mitchell has politely listened to their advice and cast it aside, opting to stay home with the same coaches that helped him reach this point and the loved ones that bring happiness and richness to his life outside of the gym.

“I’ve always believed in my coaches, my teammates and everything I have where I’m at. I don’t feel a need to move off to somewhere else.

“I do travel to other gyms when I have the time and the money to do so and I do think it’s good to cross train,” continued the 11-1 prospect, who ventured to Belgrade, Serbia back in the summer to train with elite judo players. “But if you go to one of these ‘super camps’ with all these fighters, you’re constantly getting beat up and I don’t train with people all the time that are beating me up.

“Sometimes I’m training with people that are a little bit less than my skill level and I’m getting to practice moves on them,” he added. “We’re flowing and I’m practicing and I don’t have to worry about some dude smashing me.”

Plus, staying at home in Arkansas is financially prudent for the avid outdoorsman who likes getting his hands dirty and tackling all kinds of different projects on the plot of land he calls home.

All of that is why he’s so adamant about wanting to get some camouflage gear to wear inside the Octagon — it’s not a fashion statement, but rather a nod to where he’s from, the people he loves and the way of life he enjoys.

“It represents everything that I love and a big part of who I am,” Mitchell said. 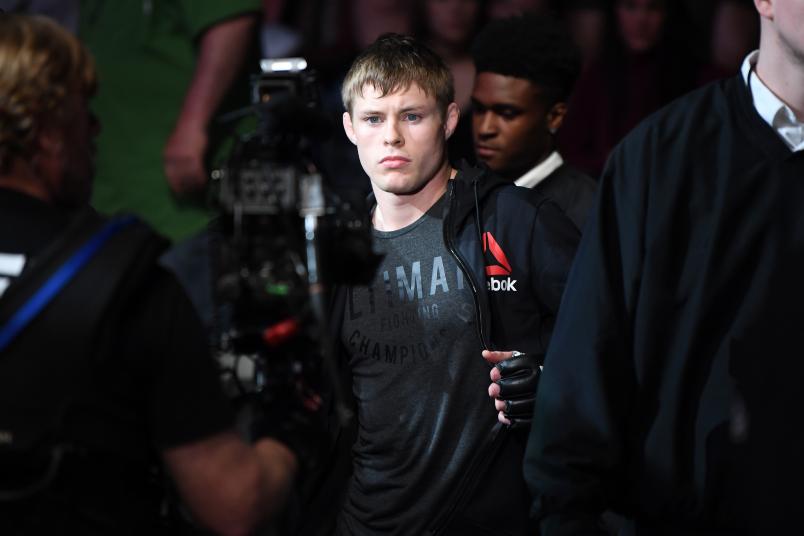 And while he won’t be sporting camo in the cage on Saturday, Mitchell will continue to brandish the all-action, high-pressure style that has helped him walk away with victories in each of his first two UFC fights when he sidles up next to Sayles this weekend.

Like Mitchell, Sayles is an action-oriented competitor who puts a high value on finishing fights and giving fans their money’s worth whenever he steps into the cage, which is why “Thug Nasty” was excited about the opportunity to share the Octagon with him this weekend in the nation’s capital.

“He’s going to be moving forward and throwing; the forward pressure is good,” Mitchell said of Sayles. “I like the matchup, I think the fans are going to like it and regardless of the outcome, it’s going to be a good one — a good old throwdown.” 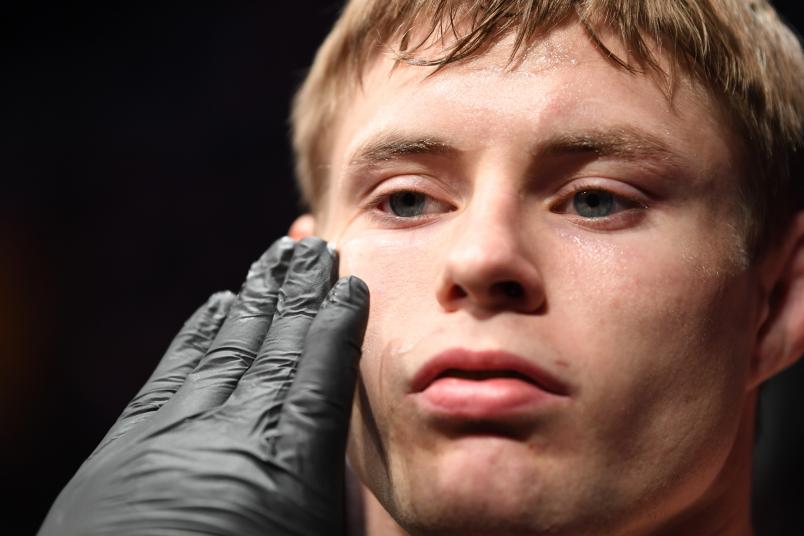 And once the dust settles, he’ll head back home to Arkansas to celebrate the holidays and get to work on another project or two.

“I want to get out of this fight healthy if I can and go on to building my metal workshop, my metal house so my family has somewhere to rest their heads, “ said Mitchell. “I think most important is winning the fight, but afterwards there is a lot of stuff I want to do that doesn’t have anything to do with fighting.

“If I’m healthy, I’ll be training the whole time — it’s not like I’ll take training off — but I’ve got some good things planned for when I get back home.”