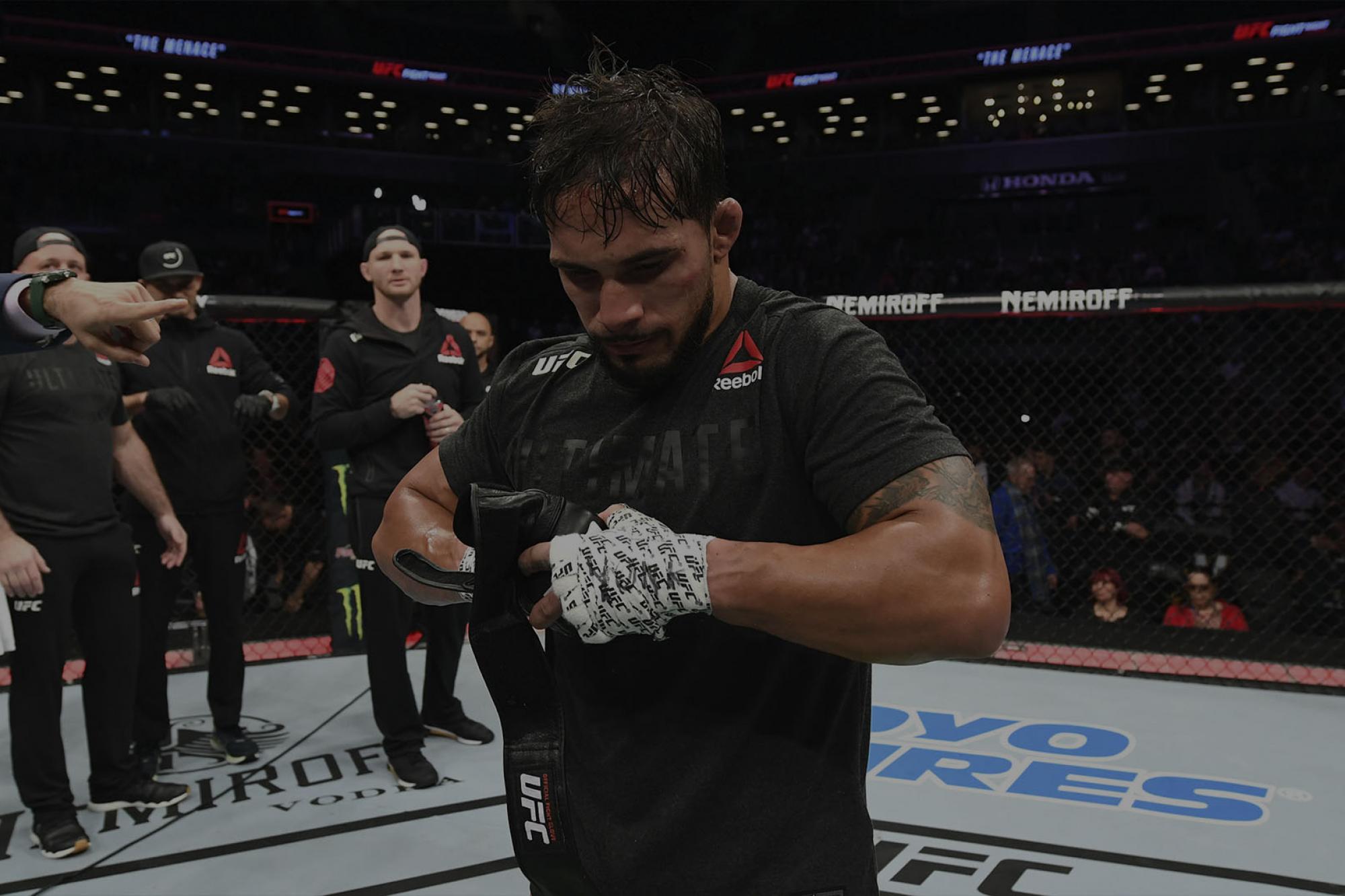 “I want my kids to look back and see that even though I went through adversity, I came out on top,” Bermudez said.
By Thomas Gerbasi • Jan. 22, 2019

The fight game doesn’t have a great reputation when it comes to happy endings. Dennis Bermudez made an exception to that rule Saturday night when he retired, not after a crushing knockout loss or a lopsided decision defeat, but after a victory.

“I want my kids to look back and see that even though I went through adversity, I came out on top,” said Long Island’s Bermudez, 32, who retired with an 18-9 record after decisioning Te Edwards in Brooklyn’s Barclays Center.

Those two boys saw their father shake off a four-fight losing streak to beat one of the lightweight division’s top prospects and then leave the sport on his own terms. It was an inspiring night not just for the Bermudez boys, but for the uncle of “The Menace,” who is in his own fight against cancer.

“I never quit at anything I put my mind to in my life,” said the longtime featherweight contender. “If I say I’m going to do something, I’m a man of my word. If I don’t mean it, I won’t say it. I want my kids and uncle to fight for what they want.

“My uncle has cancer and isn’t doing so well,” he continues. “That’s what us Bermudez boys do - when we’re down and out, we come back and win.”

Watch Dennis Bermudez give his retirement speech after defeating Te Edwards in Bermudez' final fight in the Octagon.

It’s a nice legacy to leave, even if it didn’t come attached to a UFC title. Unlike boxing, a solid career doesn’t automatically come with a title belt from one of several sanctioning bodies in a seemingly endless amount of weight classes. In the UFC, there’s one champion per division, which means only a combination of consistent wins, taking advantage of the right opportunities at the right time and a little luck will put a fighter in position to take a title.

A native of Saugerties, New York, Bermudez was a Division I wrestler for Bloomsburg University who made his pro MMA debut in 2009. Two years later, he brought at 7-2 record into the Ultimate Fighter, moving from 155 to 145 pounds to do so.

Bermudez took to featherweight, winning TUF 14 bouts over Jimmie Rivera, Stephen Bass and Akira Corassani before losing in the finals to Diego Brandao. Bermudez’ UFC debut did earn him Fight of the Night honors, the first of five post-fight bonuses, and after the loss to Brandao, he ran off seven consecutive wins, quickly moving from prospect to contender.

Included over the course of that streak were victories over future champion Max Holloway, Jimy Hettes, Clay Guida, and a Fight of the Night classic with Matt Grice.

An eighth straight win might have put him in a title fight, but he was submitted by Ricardo Lamas in November 2014 and then was halted by Jeremy Stephens eight months later.

“I didn’t think I was doing anything wrong losing those two fights,” he told me in 2016. “The only thing I could think of is that I made a mistake and got caught. Prior to those losses, I felt like I was doing really, really good, and then everything changed in a moment’s time. If I really dwelled on it and thought about it, I could drive myself into a deep, dark place, and it could be bad. But it’s over, it’s done with, you gotta move on and move forward. It happens. This sport can make you the happiest man on the planet or the saddest. It’s a very unforgiving sport.”

And every loss hit home for the ultra-competitive Bermudez.

“When you lose, it’s got to hurt,” he said in 2016. “You’ve got to be upset about it. There are a lot of sacrifices that go into this, so when things don’t go your way, it’s gotta hurt. That’s how I’ve looked at it, even when I was younger wrestling. I would lose and I’d be in the locker room crying and I’d be upset about it because I didn’t train to lose.”

Bermudez bounced back with a pair of wins, but four straight losses that included three consecutive split decision defeats left his career in limbo.

He decided that he would make the walk again last weekend, and he would do it at 155 pounds. There were hints that the fight would be his last, but it wasn’t until it was all over with Edwards that he made it official. And did it his way.

“I pushed myself really hard and have been competing since I was in seventh grade,” he said. “I have two little boys at home. The fight game’s tough and I want to be able to see my grandchildren grow up. I just want to take care of myself now. It feels nice to go out on my terms.”