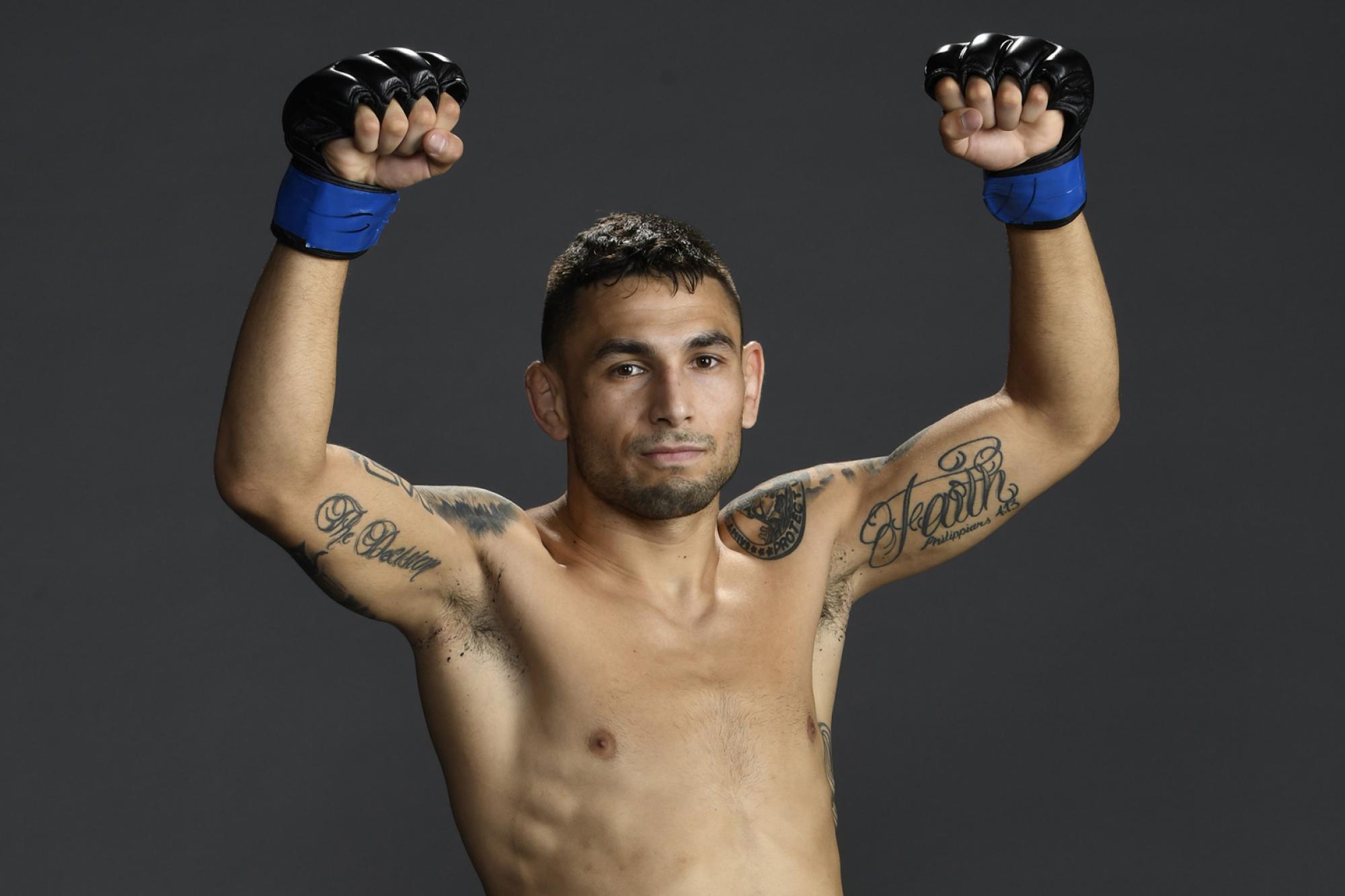 At UFC 255 Alex Perez will have the opportunity to prove that he's the best flyweight in the world when he fights Deiveson Figueiredo for the UFC flyweight title.
Nov. 19, 2020

Jason House was halfway around the world in Abu Dhabi, but the manager couldn’t wait to let his client, Alex Perez, know that his life was about to change.

“It was out of nowhere,” said Perez of the phone call letting him know that he was going to be fighting for the UFC flyweight title in the main event of UFC 255. “My manager called me in the middle of the night and let me know and I couldn't even go back to sleep. I was up and staring at the ceiling all night, like, 'Man, everything I've worked for, for the last ten years, is coming down to November.’”

Now it’s down to a couple days before he steps into the Octagon to face champion Deiveson Figueiredo this Saturday in Las Vegas. That’s a lot to deal with, knowing that your life’s work for a decade comes down to one fight of 25 minutes or less. But Perez isn’t feeling the heat ahead of this weekend’s bout.

“It's not pressure; it's just realizing that you're that much closer to your goal,” he said. “It's not like I'm putting that much pressure on myself like, I've gotta win, I've gotta win. We could fight ten times and you never know how many times he's gonna win or I'm gonna win. But as long as I'm doing everything right outside when I'm training, it's still 50/50, but I believe I can win and I'm not putting that much pressure on myself. I'm 28 years old. If it's not now, it will be sometime in the future.”

But why not now for the pride of Lemoore, California, who is the first graduate of Dana White’s Contender Series to fight for a world title. And since earning a UFC contract with a first-round submission of Kevin Gray in August 2017, Perez has steadily fought his way into the rankings and up the ladder, compiling a 6-1 record with the only loss coming in 2018 to Joseph Benavidez.

Perez rebounded in style from that setback, going 3-0 with two finishes of Jordan Espinosa and Jussier Formiga, and when Cody Garbrandt was forced out of a bout with Figueiredo due to injury, there was suddenly a high-profile opening for one of the top 125-pounders.

“To me, if they were to pick (Brandon) Moreno or Askar (Askarov), there's nothing you can do about it,” said Perez, who was scheduled to face Moreno this weekend before he got an upgrade to the main event. “There's no reason to be upset or complain. I believe I'm the number one contender. I beat Jussier, someone that Brandon Moreno had a split decision with. Askar, I feel like he hasn't beaten that many top guys. But with that said, if they were to pick one of those guys, I wouldn't be upset. It would suck, but life isn't fair always, so you just kinda roll with the punches and work your way there.”

MORE UFC 255: Fight By Fight Preview | How To Order | Brandon Moreno | Every Finish By Shogun Rua | Embedded | Rise Of Alex Perez | Countdown | Fighters On The Rise | Free Fight: Shevchenko vs Chookagian | Inside The Octagon

That’s Alex Perez in a nutshell. He’s not going to spend more time doing interviews than training, and he’s not going to light up social media with his daily antics. His dedication is saved for the gym and the fight and not everything around it. And that doesn’t just go for this fight, but for whatever happens should he go back home with an extra belt in his possession.

“As of right now, I can't think too far ahead,” he said. “I've just got to focus on the fight and when all that stuff comes, I'll be ready for it. It's not like the first time I had to deal with media and stuff like that.”

He’s handled it all like a champ thus far, but it’s not high on his priority list. What is at the top of that list is being prepared for the charge of the Brazilian champion, someone Perez has studied long before he signed a contract to fight him.

“I think it helps in every fight, just trying to figure out what people's weaknesses are, what their game plans were,” said Perez, a student of the game who has admitted in the past that he can’t even watch a fight for enjoyment’s sake anymore because he’s always analyzing everything. “This fight isn't any different. I've watched him fight live, I've watched him fight on TV, and eventually I knew we were gonna fight; I just didn't know when. It's a small division, so we were bound to fight at some point in time.”

That point is rapidly approaching, and it’s the only thing that’s been on Perez’ mind since that middle of the night phone call. And it’s not about fame, glory or the belt; it’s about having the opportunity to be the best 125-pound fighter in the world.

“I've definitely thought about that,” Perez said. “Every time I'm running, every time I'm hitting the pads and I'm tired, of course I think of that. The reason why I'm doing this is to be the best in the world, the reason why I'm running extra is to do this. It goes back to realizing that you're that close to a goal that you've set. To get that title, that's everyone's number one priority in every sport. You hardly see guys that are in it just to be in it. So it would be everything for me.”